There are always tradeoffs. No matter how well-intentioned the policy and regardless of the urgency of the circumstances it is designed to address, there will be unintended consequences. And when the policy in question is as daunting in its scope as a $2.2 trillion comprehensive relief package, you can bet that there are a lot of unforeseen variables that will give way to suboptimal conditions. For restauranteurs in a state of state-mandated paralysis, one such tradeoff is proving unendurable.

“If the intention was to get people back to work, they’re not doing it,” restaurant owner and celebrity chef Tom Colicchio said of the expanded unemployment-insurance benefits in the CARES Act. “They’re not going to come back to work because unemployment is too attractive.” Colicchio is not the only restauranteur mourning the likelihood that, when furloughed service industry workers are called back to their places of employment, a simple cost/benefit analysis may lead their former employees to stay home. “They’re getting paid more on unemployment than they would if they were actually working,” Minneapolis-based coffee-chain proprietor Christian Ochsendorf told Politico. “Heck, if they’re making more money sitting at home,” Ohio bar owner Adam Rammel speculated, “I’m fearful that some may not want to come back.”

Who could have possibly foreseen this perverse incentive associated with expanded unemployment benefits? Well, as it happens, a lot of Republicans.

“You’re literally incentivizing taking people out of the workforce at a time when we need critical infrastructure supplied with workers,” said Sen. Lindsey Graham of the provision that allotted an extra $600 per week beyond state-level unemployment benefits for four months. Sen. Ben Sasse expressed similar dissatisfaction with this measure and its potential to sever employees’ relationships with their current employers. “It’s perverse,” he declared. “It’s against the purposes of the legislation, and it could exacerbate life-threatening shortages in a number of critical sectors.” Sen. Tim Scott outlined a scenario in which someone who makes $30,000 annually in the service sector collects the equivalent of $50,000 per year on unemployment. “So, if you’re on unemployment for 16 weeks,” he noted, “we would give a 50 percent raise under that scenario.” Sen. Rick Scott concurred. “Once we get this crisis behind us,” he tweeted, “we shouldn’t have policies in place that disincentivize people from returning to the workforce.”

Not only were these predictions entirely accurate, they were also submitted in good faith. Theirs was an attempt to balance the needs of an exigent crisis against those that could end up exacerbating and prolonging its adverse economic effects. But to hear Democrats and their allies in media tell it, these were not sincere and well-meaning objections at all. To the contrary: These Republicans, we were told, had only confessed their outright hatred for society’s neediest and most marginal constituencies.

“Several Republican senators are holding up the bipartisan coronavirus emergency bill because they think the bill is too good for laid-off Americans,” insisted Sen. Chris Murphy. “Republicans right now are holding up COVID relief package because the unemployment insurance is TOO GENEROUS,” Sen. Brian Schatz tweeted. “How absurd and wrong is that?” Sen. Bernie Sanders said, mocking the concerns expressed by these Senate Republicans. “What kind of value system is that?”

If Democrats were uncharitable toward their Republican colleagues, the press was merciless. “GOP Senators object to help for unemployed,” the CNN wire service headline declared. “They worried the federal government was in danger of doing too much to help low-income workers whose jobs are being sacrificed to save lives,” read the New York Times editorial board’s summary of these senators’ “meanspirited” and “misguided” view. For the Tampa Bay Times editorial board, the question was a simple one: “Why is Sen. Rick Scott so heartless toward jobless Floridians?” “The position of this group of Republicans is also one that fails to consider just how much workers are hurting,” Vox.com patiently explained.

Above all, the critics were most apoplectic over the prospect that these Republicans’ parochial concerns could delay the passage of desperately needed financial relief. That same fear has not been in evidence as congressional Democrats spent the last five crucial days objecting to and delaying the appropriation of funds to replenish the depleted Paycheck Protection Program, which allocates forgivable small-business loans to firms that maintain their current payroll obligations. In fact, according to the Washington Post, its Republicans who currently “face heat” for not capitulating to Democratic demands.

There were plenty of reasons not to dismiss but overrule the concerns expressed by Republicans who were skeptical of certain CARES Act provisions, most of which had to do with the extenuating circumstances of the moment. Republicans had to sacrifice their instinctual (though selective) antipathy toward extensive borrowing and deficit spending. Democrats had to abandon their ambition to redefine the American economic landscape. Everyone’s ox was being gored. And the argument that favored the good over the perfect ultimately won the day. But this affair is illustrative of a phenomenon that typifies so much toxic political discourse.

Few entertained even the notion that these Republicans’ concerns were well-founded. Fewer still imagined that the consequences of which they warned could be terribly damaging to small businesses. Instead, these GOP senators were caricatured as irredeemable villains, and their objections were pilloried. The objective of this campaign, clearly, was to intimidate these conscientious objectors into capitulation and to silence their would-be allies. Unfortunately for the restaurants and businesses that don’t know if they’ll be able to open after four months of government-ordered suspended animation, it worked. 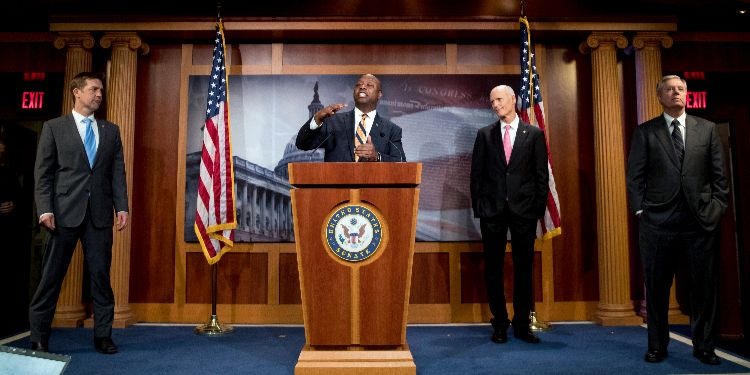