If the GOP is to be converted into a vehicle for politicians who evince Donald Trump’s brand of pragmatic center-right populism, Trump will have to demonstrate his brand of politics can deliver victories for people other than himself. Presidential pen strokes help to achieve that, as do judicial appointments. Nothing is so permanent, though, as sweeping legislative change. On that score, the newly Trumpian Republican Party is coming up short. If the passive process of transformational legislative success fails to compel anti-Trump holdouts in the GOP to give up the ghost, there is always arm-twisting. It seems the Republican National Committee is happy to play enforcer.

The RNC’s nascent effort to stifle anti-Trump apostasy by making examples of high-profile heretics has claimed its first victim: New Jersey’s Lieutenant Governor Kim Guadagno. The Republican is running to replace the nation’s least popular governor, Chris Christie, and the effort has been a struggle. Trailing badly in the polls and facing the headwinds associated with trying to succeed an unpopular outgoing GOP governor in a blue state, Guadagno needs all the help she can get. That help won’t be coming from the RNC. According to NJ Advance Media, the committee’s objection to helping Guadagno isn’t the imprudence of throwing good money after bad. It’s that she was mean to President Trump in 2016, and she must be punished.

“[The president] is unhappy with anyone who neglected him in his hour of need,” said a source billed as an RNC insider. The specific complaint arises from an October 8 tweet from the lieutenant governor said that “no apology can excuse” Trump’s “reprehensible” conduct on the infamous “Access Hollywood” tape. “Christie was not as stalwart as some people in the party, but at least he didn’t go against him the way she did,” the insider added.

This source’s version of events was supported by former two-term New Jersey Governor Christine Todd Whitman. “She went down there, and the (Republican National) Committee was reluctant to back the campaign in the way one would have expected,” she said. “The implication was, ‘Well you were not a Trump supporter in the primary, and so don’t expect much money.'”

This is almost certainly a pretext. Republicans are facing stiff competition and an unfavorable political environment in November’s gubernatorial elections in Virginia and New Jersey. In 2017-2018, 27 GOP-held seats are up for grabs, nine of which are in some jeopardy of falling to Democrats. Republicans are going to have to husband their resources and triage their officeholders. That’s a forgivable, if demoralizing, condition. Declaring Guadagno to have offended the leader and to be cut off from the font of Republican goodwill is not only unjustifiable, it’s terribly foolish.

If Republican women are to be punished for saying that Trump’s comments about sexually assaulting unsuspecting females were unacceptable, there are going to be a lot fewer Republican women. Moreover, the RNC has invited the perception that there is a double standard at play here. A slew of Republicans called on Trump to drop out of the race after that tape, but the RNC is unlikely to withhold support for Senators Rob Portman or John Thune when they need it. Among those calling on Trump to drop out was his own chief of staff, Reince Priebus—a fact the president reportedly won’t let Priebus forget.

Cults of personality can be bullied into existence, but they rarely outlast the personality around whom they form unless that personality can claim some lasting achievements. In lieu of any compelling rationale, the effort to remake the GOP in Trump’s image by force will only create dissidents. The ideological conservatives who once dominated the Republican Party are unlikely to make peace with the ascendant populist faction at gunpoint. And the RNC is not solely to blame for this boneheaded move. Even if the notion that Guadagno is being punished for disloyalty is a pretense, it is a response to a clear set of incentives promoted by this White House.

Maybe the most intriguing question of the present political age is whether or not conservatives in the GOP will come to terms with a man they once saw as a usurper. A heavy hand will only catalyze resistance, and Trump needs his own party as much or more than they need him. Guadagno’s gubernatorial bid is on no firmer ground today than it was yesterday, but the Republican candidate’s allies can now legitimately claim persecution at the hands of personality cultists. Too many martyrs make a movement. The White House and the Republican National Committee should tread lightly. 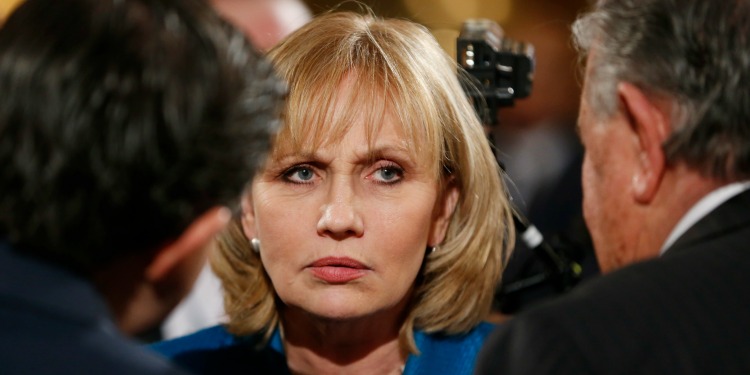