Representatives for the United States and the Russian government held a third round of talks on Wednesday aimed at “de-conflicting” the current crisis in Syria. In plain language, their mutual aim is to make sure that NATO air assets and Russian warplanes don’t accidently engage one another while they are shooting at each other’s opposing proxy forces on the ground. This conference was reportedly quite productive, and that’s probably a good thing. No one wants a mistake, particularly since the Syrian war represents the most dangerous proxy conflict between Washington and Moscow since the Soviet invasion of Afghanistan.

Since Russian forces began engaging Bashar al-Assad’s adversaries in Syria overtly, Russian forces have repeatedly violated Turkish airspace and painted Turkish warplanes with missile radar. Russian forces have targeted and harassed U.S. drones on three separate occasions, and there have been several incidents in which Russian and American fighter aircraft have come within several kilometers of one another. Russian and Turkish warplanes have had no fewer than 13 dangerous encounters in October alone. Russian aircraft have killed several hundred U.S.-backed fighters on the ground and destroyed valuable stockpiles of CIA-provided armaments. Some of those advanced CIA weapons have been used to great effect in the war that has evolved from a civil conflict into a regional war, and now threatens to become another theater in which the zero-sum game of great power politics is played.

President Barack Obama has said explicitly that it is not in America’s interest to engage in a proxy conflict with Russia. Indeed, his abject refusal to provide lethal arms to Ukrainian militants suggests this is not mere rhetoric on the president’s part. Yet since Russia intervened in Syria, the tempo of American airstrikes on Islamist targets has accelerated, and American-backed insurgents claim that they have received even more U.S.-provided weaponry than they did before this new phase of the fight. “Syrian rebels use US-made guided missiles to blow up Russian-made tanks,” the New York Times reported on Tuesday. “The increased levels of support have raised morale on both sides of the conflict, broadening war aims and hardening political positions, making a diplomatic settlement all the more unlikely.”

Having attempted to provoke the West into a conflict in Europe in which it declined to participate, Russian President Vladimir Putin has engaged in a war already in progress that Western powers cannot simply ignore. While the Russian adventure in Syria is the most obvious exercise of Moscow’s might in the region, this is not Putin’s first signal that Russia intends to reconstruct the former Soviet Union’s influence in the Middle East.

In the wake of the ouster of Egyptian President Mohamed Morsi, America’s near paralytic response to the Egyptian military’s coup finally yielded a decision to withhold military aid from Cairo. Russia quickly filled the void and inked a deal for $2 billion in arms with the new Egyptian government. As bilateral ties deepened, Moscow eventually secured from Egypt a commitment to free-trade relations with Russia’s Eurasian Economic Zone – a trade block consisting of the Former Soviet Republics of Russia, Kazakhstan, Belarus, and Armenia designed to compete with the European Union.

In June, Saudi Deputy Crown Prince and Minister of Defense Mohammed bin Salman Al-Saud made an appearance in St. Petersburg where he signed several technology and trade cooperation agreements with his Russian counterparts. As crude prices contract, the Saudis have targeted Russian dominance in Eastern Europe, but this appearance of competition is illusory. This week, in a woefully under-discussed development in the West, Russian President Vladimir Putin again met with the crown prince in Sochi where they engaged in defense-related discussions regarding the escalating crisis in Syria. Russian Foreign Minister Sergei Lavrov revealed that the Russian and Saudi representatives agreed to enhance military and intelligence cooperation in the effort to “combat terrorism,” even though both governments are at cross purposes in Syria.

Russia’s military intervention in Syria is a compliment to Iran’s expeditionary forces, which now consists of warplanes and thousands of ground soldiers. This dual intervention is an outgrowth of the “long term and multifaceted” military cooperation agreement the two governments signed in January. Even before the terms of a nuclear accord have been implemented, Russia agreed to sell millions of dollars’ worth of advanced S-300 anti-aircraft defense systems to Tehran. This was a deal reached in 2008 but had been suspended indefinitely in observance of United Nations Security Council arms restrictions agreed to in 2010, and that remains in place.

This Tehran-Moscow alliance now has a new and, for the United States, deeply embarrassing partner in Baghdad. This Triple Entente for the 21st Century has yielded a trove of actionable intelligence, according to Iraqi officials. “The intelligence sharing alliance, which comprises Syria, Iran, and Russia, was announced last month,” Al Jazeera reported.  “Iraqi sources said two Russian one-star generals were stationed at the center.”

This is not the only formerly U.S.-dominated sector upon which Russia is encroaching. As the Afghan theater continues to deteriorate and the Taliban increases its reach, culminating in the temporary fall of the city of Kunduz to Islamist insurgents earlier this month, Russia has begun to make preparations to preserve its buffer security zone around that restive country. On Thursday, Russian officials announced that they were examining the prospects of re-establishing military control over the former Soviet Republic of Tajikistan’s border with Afghanistan. Russia has been augmenting its already substantial military presence in Tajikistan for months, including sending a series of Mi-24P attack helicopters to the country last week. These are not purely defensive capabilities.

This robust and multidimensional Russian display in the Middle East is an effort to both reestablish Moscow as a dominant actor in Central and Southwestern Asia. This is a project that has taken on a new urgency as President Barack Obama’s time in office comes to a close. Whoever the next President of the United States is, it is almost certain that they will be less favorable toward extricating the United States from its obligations in this region.

In his “60 Minutes” interview on Sunday, the president repeatedly referred to Syria as Russia’s “sole ally” in the region and insisted that there has been no change in Russia’s status in the Middle East since he first came to office. Only in light of the president’s dogged commitment to this delusion does Putin’s reckless and brazen gambit in the Middle East make sense. 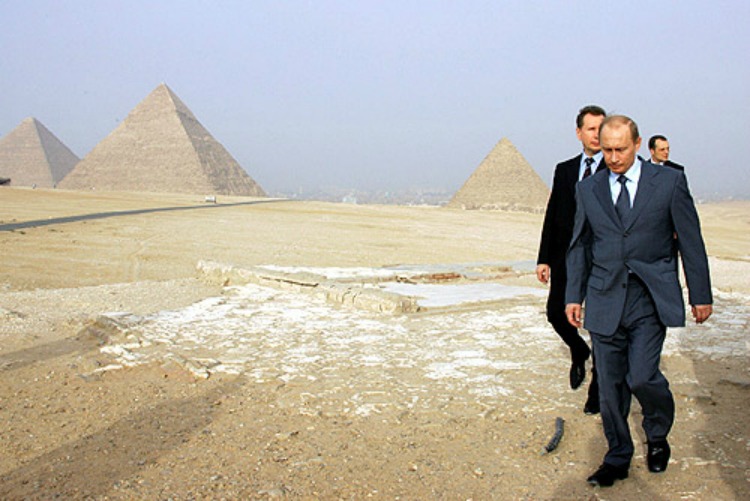