Nearly two decades ago, Vladimir Putin made his intentions plain when he mused that “the demise of the Soviet Union was the greatest geopolitical catastrophe” of the 20th century. In the years since, a staggering number of Russians have come to agree with him, particularly those who are too young to have any real living memory of life in the USSR. They should have been more careful about what they wished for. Moscow’s campaign to reconstitute the Soviet empire in Europe has delivered Russia into a state of repression and economic malaise unseen since the hammer and sickle flew over the Kremlin.

Amid its quest to reclaim “great power” status, Russia has been disconnected from the global economy. Moscow is now staring down the barrel of imminent default on its debts, but that is an academic concern compared with the hardships imposed on average Russians. The regime has responded to the freezing of its assets in Western banks by limiting access to hard foreign currency. Because it has become so difficult to process a transaction inside Russia, analysts estimate that barter will soon make a comeback as the preferred means of transacting for goods and services. In the old days, a box of lightbulbs could secure your child a placement at the Academy of Sciences. Today, Russians will have to be satisfied exchanging Chinese knockoff Gucci handbags for the basics.

The flight of Western businesses and finance from Russia has thrust the nation into a time before perestroika. The West is moving to cut Russia off from the World Bank and International Monetary Fund, a move that would make securing loans for capital investments in private ventures nigh impossible. Even the iconic American brands that opened the Soviet Union to Western commerce—Levi’s jeans, Pepsi Cola, and McDonald’s—are all gone. Putin has responded to this exodus by threatening to appropriate and nationalize the abandoned commercial property owned by Western interests. It’s unclear what Russians would do with this confiscated booty, but such a move would increase the risk associated with investing in Russia long after the crisis in Ukraine is over.

The Ruble is fast becoming valueless, but that will soon be the only tender available to Russians. The pain of this burden may be mitigated only by the disappearance of anything worth buying. The availability of consumer and luxury goods, produce and cooking oil, and even staples like rice are now severely limited. The Russian parliament is introducing initiatives designed to freeze prices for essentials such as food and medicine, severing the Russian economy from the marketplace. Reports from Russia indicate that food rationing has already begun, and crowds forming outside ATMs and grocery stores evoke terrible images of Soviet citizens queuing for black bread.

Reliable reporting from inside Russia is increasingly hard to come by, though, because the economy isn’t the only thing that has reverted to proper Soviet form. The information environment in Russia has become a dystopian nightmare almost overnight. As the costs of his war began to bite, Putin moved quickly to crush the last few independent media outlets in Russia. Foreign social-media venues, too, have been banned—including wildly popular platforms such as Instagram parent company Meta, which has been deemed an “extremist organization.” Dissent against the official Kremlin narrative is now criminal; even calling the war in Ukraine a “war” is a prosecutable offense. The few videos still trickling out of Russia indicate that police are now stopping pedestrians on the street and searching their cell phones for evidence of subversive thought.

The information landscape inside Russia is so corrupted that Western analysts are now forced to practice the old art of Kremlinology. Regional observers have been reduced to scrutinizing Kremlin-approved photographs of regime events to glean insights into dynamics within Putin’s inner circle. Either that, or they’re carefully studying Russian talk shows to discern the regime’s thinking on a range of issues. The media environment is so degraded that no less a figure than the spokesman for the Ministry of Defense seems perfectly comfortable appearing on television to allege that the U.S. is weaponizing Ukrainian birds to “distribute biological weapons.” Such fantastical claims can only face public scrutiny if public scrutiny is a legal and compelling feature of civil society.

Amid all this, Putin seems quite pleased with himself. The Russian president’s disconnection from reality is near total. “The Soviet Union always lived under sanctions and succeeded,” the hidebound autocrat asserted this week. If Putin considers the Soviet Union’s history of violence, repression, economic stagnation, and self-dissolution a success, it’s hard to imagine that he can conceive of failure. Indeed, from his perspective, the invasion of Ukraine and all its attendant hardships is a success.

Sure, Moscow hasn’t secured any of its strategic objectives in Ukraine, and Russia is sure to emerge from this conflict an isolated and diminished global power wholly dependent on rogue states for its survival. But Putin has the visuals he wanted. Today, the flag of the Soviet Union once again adorns tanks rolling into Europe, and the 1945 victory banner flies over Ukraine. The sound of dissent arising from the streets is muted amid the terrified screams of the brutalized and oppressed. The market has been tamed, and the Russian people have been rendered placid and governable once more. This is the “greatness” Russians supposedly longed for. Now they have it. 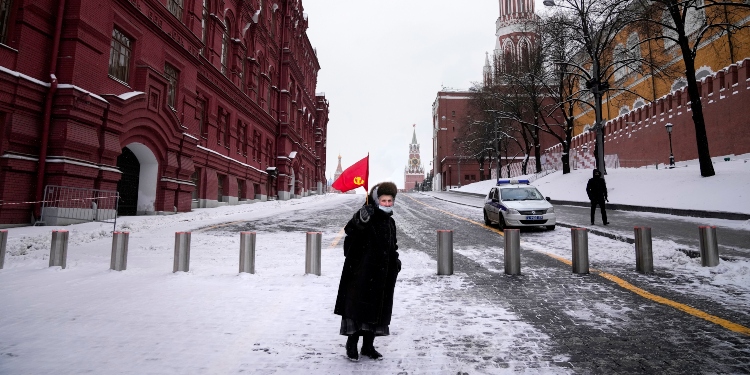