As Russian forces retreat from their failed drive to capture Kyiv, Ukrainian officials and Western reporters are witnesses to horror after horror.

Journalists are confronted with mass graves, the execution-style murder of civilians, and the booby-trapping of bodies left to rot in the streets. Little is known about what’s happening behind Russian lines, but accounts of the mass “evacuation” of Ukrainians to Russia is lent credibility by videos featuring the “evacuees” heaping praise on Moscow and insinuating that Ukraine is responsible for the bombing of its own hospitals and civilian shelters. Combined with evidence that the Russian campaign has taken to using banned munitions and unguided ordnance to bomb, starve, and freeze whole cities into submission, it’s hard to avoid the conclusion that Russia is executing crimes against humanity.

Moscow’s strategic ineptitude along with mounting proof that Russia is committing systematic atrocities inside Ukraine should by now have led any self-respecting Western analyst to abandon the temptation to compare this barbarity to their favorite frame of reference: the Iraq War. It seems, however, that they just can’t help themselves.

As recently as March 29, former Foreign Affairs editor Gideon Rose likened the strategic debacle Russia engineered for itself to the campaign mounted by coalition forces in 2003. “Defeat or stalemate on the battlefield is a necessary condition for Russian withdrawal,” he wrote, “but as Americans have learned, it can take a long time for a great power to go through the stages of grief and accept such an outcome.”

Even today, the story goes, American elites still stubbornly refuse to accept that they’ve been thoroughly beaten in Iraq. But who could blame them? After all, U.S. forces remain on the ground in Iraq at the invitation of a friendly government in control of the whole of its sovereign territory. Vladimir Putin could only hope to fail in Ukraine with such aplomb.

This exercise in throat clearing can only be understood as a gesture of deference to the quasi-religious conviction that the Iraq War was a strategic blunder for the West. That conviction is being shaken by events in Ukraine, or we wouldn’t be forced to endure so many tortured efforts to liken that campaign with Russia’s spectacular blunder.

Writing in the New York Times, the essayist Tanner Greer denounces the Iraq War as a perfunctory aside in an otherwise rational analysis of Putin’s miscalculations. The Bush administration alone “blundered its way into catastrophe two decades ago” when it succumbed to emotion and motivated reasoning in the wake of the 9/11 attacks. Greer is right to warn against allowing moral outrage to motivate policymakers. But today, the West’s “catastrophe” in Iraq has produced a stable, nascent democracy in the heart of the Middle East that no longer threatens Western security. That’s more than you could say for Saddam Hussein’s Iraq, and a lasting victory of that sort in Ukraine is now wholly out of Putin’s reach.

More than most, Oxford University professor Andrew Hammond exposed the blindness of devotees to the Iraq War-as-disaster narrative. He says that from the sanctions imposed on Hussein’s regime to the West’s occupation, the U.S. is particularly guilty of “torture on a widespread scale.” He contends that the West’s abundant commitment to Ukraine’s independence has been accompanied by an “equally voluminous outpouring of supremacist talk that only reminds the rest of the world of western hypocrisy.” By trying to contrast itself with Russia’s conduct, “the West convinces itself that it’s good once more.”

To the extent that crimes were committed by American service personnel or contractors in Iraq, we know about them because they were investigated by independent media outlets and confirmed by prosecutors, and their perpetrators were punished in accordance with the law. That’s more than can or will be said of Russia’s conduct in Ukraine, but that worldview-shattering caveat is left to be articulated only by those capable of holding two competing thoughts in their heads simultaneously.

As the Spectator’s Andrew Bacevich demonstrated in a March 2 article, the Iraq War analogy was deployed well before anyone could have rightly known the salience of such comparisons. The columnist rightly notes that Russia’s actions in Ukraine have exposed the falsity of the idea that the world is governed by liberal “norms.” Those “norms” were a byproduct of America’s preponderant military power alone. And yet, “the United States…has routinely demonstrated a willingness to write its own norms while employing violence on a scale far exceeding anything that Russia has done or is likely to do,” Bacevich continued. “As for the calamitous results of the U.S. invasions of Afghanistan and Iraq, the impact of Russia’s incursion into Ukraine rates as trivial by comparison.”

Okay, but how could he have known so early in the war how bad it would go for Russia? Perhaps by engaging with Ukrainians, for one. Or maybe by consuming any of the declassified pre-war intelligence forecasting planned war crimes and the mass mobilization of the Ukrainian people to resist Moscow’s designs. If your only living memory of a popular insurgency is the one that materialized in Anbar Province, you could be forgiven for dismissing as inconceivable the scale of the resistance Russia is encountering from Ukrainian regular forces and citizens alike. It must be satisfying to project that failure of imagination onto everyone else.

If Vladimir Putin was presiding over a debacle akin to the West’s alleged misadventure in Iraq, his troops would today be entering their second week in total control of Ukraine’s capital city. Three weeks from now, he’d be declaring the end of combat operations in Ukraine. The occupation would face a restive populace, particularly in areas populated by ethnic groups that benefited most under the old regime, but the insurgents would be outnumbered by a population that was either ambivalent toward or outright supportive of the new status quo. And in 20 years’ time, despite many growing pains and external attempts to destabilize the country, Putin could count on a stable and secure government in Kyiv that no longer opposed Moscow’s interests.

If Putin is still betting on that outcome, the Russian autocrat is as deluded about the Iraq War as so many of its detractors seem to be. 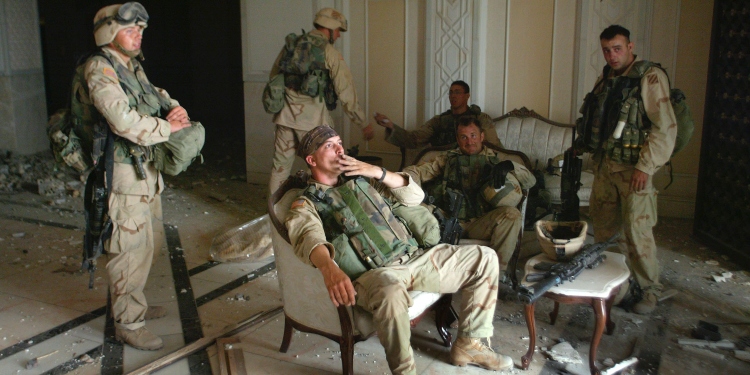