Donald Trump’s most avid supporters are truly concerned. The president and his administration, they frequently contend, are being sabotaged.

The saboteurs vary, depending on the issue vexing the populist wing of the GOP that day. The list of those undermining this presidency is ballooning: “globalists,” “neocons,” former Obama administration officials, John McCain, and, of course, Democrats. It doesn’t appear to have occurred to those nursing a palpable sense of betrayal that alleging a conspiracy of wreckers concedes that Trump’s first 100 days in office were, to say the least, subpar.

The President of the United States is not without agency, and it is patronizing to rob him of it in the attempt to excuse his failures. Yet, Trump fans do have a kernel of a point. The president is being undermined from within, albeit without malicious intent. If Trump’s populist/nationalist fans are looking for a culprit, they need look no further than the nearest mirror. More specifically, they can cast blame for Trump’s predicament on their champion in the West Wing: Steve Bannon.

Regardless of the subjective merits of the various policy proposals that landed with a thud during Trump’s first months in office, those failures are often attributable to the work of the people who make up “The Bannon Wing” in the White House.

An executive order banning travel into the United States from seven majority-Muslim nations, issued just eight days after Trump was inaugurated, almost exploded on the launch pad. It resulted in 24 hours of disastrous press during which American citizens were detained by law enforcement, children and the elderly were harassed at airports, and foreign nationals who had risked their lives helping American soldiers were turned back to war zones. In all this, grassroots Democrats discovered an organizing principle. That executive order, reportedly crafted by Bannon and his erstwhile ally (and former aide to Jeff Sessions), Stephen Miller, was stayed in the courts before the White House dropped it. A revised version of that order hasn’t fared much better and currently resides in legal limbo.

By all accounts, Bannon was no fan of the GOP’s failed first attempt to repeal and replace ObamaCare—he was in good company among conservative Republicans. But he also knew that the failure of this first attempt at a major legislative success would reflect poorly on the administration he served. And so the former Breitbart News chief was dispatched to Capitol Hill to cajole recalcitrant conservatives in the Freedom Caucus into supporting the flawed legislation. “Guys, look: This is not a discussion,” Bannon was quoted as saying by Axios’s Mike Allen. “This is not a debate. You have no choice but to vote for this bill.” This condescension did not go over well with a group of legislators who are used to being strong-armed by Republicans with more clout than Bannon.

That bill’s failure is surely attributable only to the bill itself. It is, however, an open question as to whether Bannon truly regretted its demise. According to New York Magazine, sources in the White House said Bannon privately undermined the bill, which he allegedly said was “written by the insurance industry.”

“He’s maniacally focused on these trade issues,” Bannon said of Trump in an interview with the New York Times last week. He explained that the Trump White House would soon revive a push to compel American firms to purchase U.S. products and hire U.S. workers. That impulse likely led to the inclusion of a provision in Trump’s executive order approving the construction of the Keystone XL pipeline. The provision mandates that “all new pipelines, as well as retrofitted, repaired or expanded pipelines” use American steel “to the maximum extent possible.” Trump even told a joint session of Congress that “new American pipelines be made with American steel.” There was just one problem: American firms no longer produce nearly enough of the kind of steel necessary for that kind of project. In retreat, the White House explained that Keystone and pipelines like it are not really “new,” and so the order does not pertain to them.

The nationalist wing of the GOP also stumbled into problem this week when a federal judge blocked yet another presidential executive order, this time targeting so-called “sanctuary cities.” The court ruled that the order, which blocked the disbursement of federal funding unless targeted jurisdictions complied with federal immigration officials, violated the separation of powers. “The Constitution vests the spending powers in Congress, not the President, so the Order cannot constitutionally place new conditions on federal funds,” read Judge William Orrick’s decision. In other words, only Congress can place conditions on the distribution of federal funds.

This executive order and those like it may be re-written to survive judicial scrutiny, or another judge could find that Orrick’s argument lacks merit. In any case, the effort to pursue the nationalist wing’s policy preferences has called into question this White House’s competence. Fortunately for the courts, they’ve been temporarily spared a review of the latest Bannon project: withdrawing from the North American Free Trade Agreement (NAFTA).

On Wednesday, administration officials told reporters that another Bannon-devised executive order withdrawing the U.S. from NAFTA could be revealed as early as next week. Such an order, which would inevitably be subject to an increasingly familiar and uncertain review process in the courts, was immediately met with protests from congressional Republicans and the governments of America’s northern and southern neighbors. Following two calls with the president and prime minister of Mexico and Canada respectively, Trump promised he would only “renegotiate Nafta rather than terminate.”

Was this merely a negotiating tactic? Is Trump communicating to his nationalist supporters that he hasn’t abandoned them entirely? Maybe. But if Trump is truly committed to renegotiating NAFTA, the pro-trade Republicans with which he is also surrounded may soon convince the president that North America’s free-trade zone was already updated amid negotiations over the Trans-Pacific Partnership. This ready-made “win” on trade might soon prove irresistible.

“Bannon is Trump’s tie to his base,” The Hill’s Kristin Tate wrote. “Trump needs Bannon, the nerve center of his ideological brain trust.” The president doesn’t appear to agree. “I like Steve, but you have to remember he was not involved in my campaign until very late,” Trump told the New York Post following Bannon’s ouster from the National Security Council’s Principal’s  Committee. So long as Bannon and the “political movement” Tate says he “embodies” continue to herd this administration into cul-de-sacs from which they are forced to retreat sheepishly, the president’s patience will one day run out. If Trump fans truly cared about the success of this administration, they’d welcome that prospect. 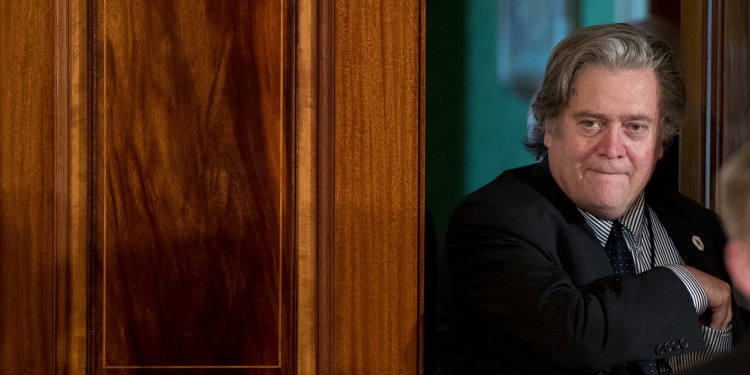