For committed conservatives, this election cycle has been a cascade of horrors culminating in one terrible but inescapable conclusion: their philosophy isn’t popular, even among those who call themselves conservatives.

To those on the right who vote for conservative policy – supply side economics and originalist constitutionalism at home and a robust, unambiguous defense of American interests abroad – this shouldn’t come as news. The conservative pitch to the electorate has never been trendy. It promises voters nothing but the fruits of their own labor and to keep government out of their way. Some reform-minded conservatives, aware of the unappealing nature of bootstrap-ism, have identified in Donald Trump’s ascension a confirmation of their own preconceptions about the problematic brand of conservatism.

Many a scholarly political commentator has observed that the GOP does not have and continues to lack a comprehensive appeal to the displaced working-class voter without a college degree. They’ll concede that Democrats really don’t either, but at least they promise this demographic the beneficence of the public sector. The stresses associated with being shunned by Democrats and ignored by Republicans has set the white working-class pressure cooker to boil. Something was bound to give eventually, and the Trump surge is that give.

Maybe this is true, or, at least, half-true. It might also be the case that a number of reformist conservatives who have long offered this critique of the GOP are imposing their priors on a distinctly amorphous phenomenon. Talk to any Trump voter, and they will tell you that they support him for his policy positions. Surely, they believe that is the case, but his policy positions evolve radically from one day to the next, and today’s position often contradicts yesterday’s. They’ll contend they support taking a firmer line on international trade to restore manufacturing at home, but those same voters who want to see a restoration in domestic manufacturing don’t want to pay the price hike in consumer products associated with tariffs, quotas, and a few glorious trade wars. They contend that they oppose “amnesty,” but ignore that their candidate supports the reintroduction of deported immigrants and has defended his use of foreign (even illegal) labor to do the work Americans won’t. To identify a coherent philosophy in Trump’s candidacy is to be extremely charitable and selective.

“There you go,” the Trump-excusing pundit erupts. “Condescending toward his voters again, like so many coastal elites. This is just the kind of dismissive and snobbish contempt that led the GOP to believe Trump would collapse. You just don’t get it.”

That last bit is especially irksome. That assertion, “you just don’t get it,” presumes there is some unfathomably complex meaning in the anger of the electorate. It’s not hard to grasp, nor is it unwarranted. American voters on the mid-to-lower ends of the education and income spectrums have seen their position deteriorate over the last two decades. Some of that is due to forces beyond anyone’s control; globalization, economic integration, the leveling out of wages as borders cease to be barriers to trade, econ 101. Some of it, however, is due to the effects of U.S. policy, which has prioritized economic growth and the service and information sectors over protectionism and manufacturing for decades. Periods of political and economic flux produce winners and losers, and the last eight years of contraction and stagnation have yielded an army of the aggrieved.

For anyone who has interacted with a seedy pro-Trump element online, it isn’t merely the prospect of a twilight of the elites that shocks and terrifies. There is a distinctly ethnocentric element to Trump’s support. By the way, it’s one with which he is perfectly familiar and doesn’t regard as a liability, as exposed by his conspicuous refusal to denounce former Ku Klux Klan leader David Duke or his insistence that he’d have to judiciously vet white supremacist organizations before renouncing their support. But most average Trump supporters are by no means representative of these denizens of the fever swamps who hide behind anonymous online social-media profiles. The majority of his supporters are like most Americans; polite, tolerant, hard working, resentful of the direction in which their country is headed, and fearful for their children’s future. These people do not deserve to be condescended to, but they do deserve an honest appraisal of things. They’re not getting that from elites who stoke their allegedly “righteous anger,” which in truth many of them hope will retroactively validate their own long-held beliefs about the GOP’s failings.

Inchoate and directionless hatred is not productive; it’s self-defeating. Stewing resentment isn’t righteous; it’s self-indulgent. Self-pity isn’t constructive; it’s paralyzing. What makes conservatism such an unappealing philosophy when the alternative is the promise of largess confiscated from the faceless well-to-do is that it rejects the idea that one’s own lot is not of their making. It is a philosophy that rejects blame shifting when confronted with adversity. This is, at root, why Trump’s rise is a rejection of conservatism. For those who aren’t imposing upon him their hopes and are instead listening to what he’s proposed, his platform is not a positive one. He promises nothing so much as a cathartic release for people who want to see the pain they’ve experienced for so long meted out to others. This is a toxic philosophy and one that will only heighten public resentment when the relief their Savior has promised fails to materialize.

If conservatism’s lot is the wilderness, it will not be the first time. If, however, the conservative movement were to determine that it must appeal to the angry and displaced and, in so doing, must shed its attachment to individualism and classical liberalism, it will be a defunct belief structure. Voters and the conditions that compel them to cast their ballots change, but the foundational assumptions of conservatism do not. Courage is standing before the mobilized and seething mob and telling them that they are, if not wrong, acting in ways that are counterproductive. Sadly, the conservative movement hasn’t recently been characterized by much courage. 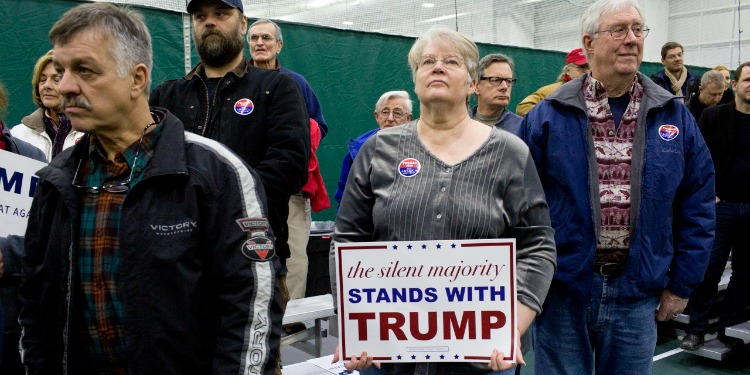