If you can’t be persuasive, be interesting. If you’re neither persuasive nor interesting, try to be funny. And if all of that fails, just be provocative; at least your audience will remember you. For Democrats, all else has failed. They’ve giving up on being compelling, coherent, or even just entertaining. In a desperate, spastic flail to capture your attention, Democrats have settled on a tactic: shock.

Democrats have internalized a caricature of the GOP as a group of aggressive vulgarians, one that they are mimicking in exaggerated fashion with the expectation that they will be rewarded at the polls. Toward that end, Democrats in Congress forged new precedents in obstructing the will of the executive branch, including a doomed filibuster of a Cabinet nominee. Democrats have nurtured their base’s darkest impulses in this effort by indulging, among other conspiracy theories, the notion that Donald Trump is an illegitimately elected president. Most pathetic, the Democratic Party seems to be pantomiming Donald Trump by imitating his most boorish behavior if only to get a rise out of anyone who happens to be paying attention.

A New York Magazine profile of obvious 2020 hopeful Kirsten Gillibrand featured the esteemed gentlewoman from New York unleashing cascade of profanity upon her interlocutor. Her interview included “one ‘f***,’ two ‘f***ings,’ one ‘bulls***,’” and a variety of other lesser but equally crude expletives, according to Politico’s Alex Caton. At a public event, while sitting across from several former speechwriters for Barack Obama, California Senator Kamala Harris (another likely 2020 candidate) castigated Representative Raul Labrador for claiming that Americans do not die for want of health insurance. “What the f*** is that?” she remarked. Her audience roared and ate it up.

Republicans “don’t give a s*** about people,” barked newly elected Democratic National Committee Chairman Tom Perez in an attack on the GOP’s approach to health-care reform. Perez employed similarly salty language to attack the Trump White House’s spending proposals. “They call it a skinny budget,” he said. “I call it a sh***y budget.” Representative Beto O’Rourke can often be seen weaving the occasional “s***” into stump speeches as he prepares to challenge Senator Ted Cruz. “Mr. President: If there was a wiretap at Trump Tower, that means a fed judge found probable cause of crime which means you are in deep s***,” tweeted Representative Ted Lieu, whose garment-rending online persona has attracted a devoted following of hysterical liberals.

Once is sui generis. Twice is a coincidence. Forty-seven times is a campaign. Democrats are quite clearly doing their best to not just generate ink but to speak above the din of opportunistically panic-stricken liberals. These are not the first Democrats to appeal to crass profanity in a contrived effort to burnish their populist credentials. As Howard Fineman chronicled for Newsweek in 1991, former Iowa Senator Tom Harkin tried to position himself as “the angry man at the end of the bar” by denouncing the “bulls***” of the Reagan-Bush era’s economic record. Harkin miscalculated. When virtually all major media outlets were regulated for decency, almost no one could broadcast those remarks. The proliferation of media outlets outside the FCC’s jurisdiction has changed the Democratic Party’s calculation.

It’s not just the Democratic Party’s political professionals who are rebranding themselves provocateurs to meet the measure of the populist moment. The liberal activist class is gearing up to make their case to the public by harassing lawmakers and scaring voters to death. Politico reported on Tuesday that Democratic protesters are preparing to lay down in the streets, ship the ashes of the dead to GOP lawmakers who voted to repeal ObamaCare, and to stage mock funerals for the unwitting constituents of Republican congressmen and women. “We can’t win based on the merit of our ideas,” confessed the proprietor of a liberal super PAC, “but rather on the way in which we deliver that message.” Some might call that an admission against interest.

That is, however, a more honest assessment of the Democratic Party’s predicament. In the electorally unenviable position they are in and lacking a positive agenda, Democrats can only oppose. When that message of blanket opposition gets stale, break the emergency glass; get vulgar, project anger, and, above all, be uncompromising. Democrats would probably cite apocalyptic Republican rhetoric in the early years of the Obama administration as precedent, and they’d not be entirely wrong. The Democratic Party’s shock jock persona is, however, their own invention.

During the 2016 primaries, Trump-skeptical conservatives fretted over the possibility that, were the populist real-estate mogul from Manhattan to win the GOP nomination, much less the presidency, Americans would become inured to his loutish persona. In the process, Trump would de-stigmatize rudeness and profanity, generate a more ill-mannered civic society, and accelerate the general coarsening of the culture. They were right. They just didn’t know that it would be the Democrats, not the GOP, who would first rush to follow in Donald Trump’s footsteps. 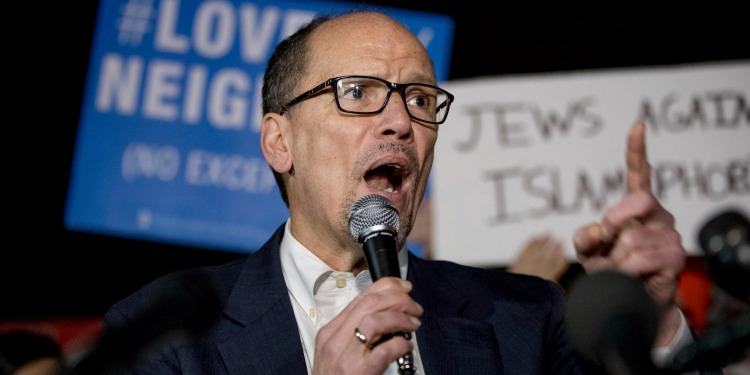