On May 11, 1996, a McDonnell Douglas DC-9 took off from Miami International Airport bound for Atlanta. A little over one hour into the flight, an improperly stored oxygen generator exploded in the airplane’s cargo hold. Seconds later, a fire broke out in the passenger cabin and the plane began rapidly losing electrical power. At this point, a fateful decision was made to open the cockpit and, as the plane banked hard toward the nearest airport to make an emergency landing, the flight crew became incapacitated by smoke. All 110 people on board ValuJet Airlines Flight 592 died when the plane crashed into the Florida Everglades.

Although it was perhaps unfair, the carrier took the blame for this incident. The brand “ValuJet” had always been “vaguely unsettling,” according to TIME magazine, in part because it evoked in the minds of consumers corner-cutting measures that only reduced the cost of flying at higher risk to passengers. Within a year, “ValuJet” was gone. The carrier bought out the smaller competitor AirTran Airways, assumed its name, and resumed normal business operations. But the carrier’s fleet continued to suffer malfunctions associated with “an array” of “maintenance problems.” The problem was the product, not the brand. In 2010, Southwest bought out the airline, and the troubled carrier had ceased all operations by 2014.

I was reminded of this story by a spasm of outrage on the progressive left over the term “woke.” Amid the dawning realization among Democratic political professionals that the uncompromising, absolutist, and illiberal brand of social-justice activism overtaking their party is an electoral drag, the party’s youngish activists are trying to anathematize the word that describes this phenomenon. But the problem is the product, not the brand.

“What went wrong is this stupid wokeness,” said Democratic strategist James Carville when asked why Democrats lost winnable races in places like Virginia, New Jersey, Minneapolis, Buffalo, and Seattle. Everything from the movement’s race essentialism to its hostility toward law enforcement is a proven political loser. The party’s activist class, Carville suggested, “need to go to a woke detox center or something.”

To this, one of the more preeminent high priestesses of this quasi-religious ideology, Rep. Alexandria Ocasio-Cortez, objected. “Wokeness,” she said, “is a term almost exclusively used by older people these days.” Moreover, the only people “seriously using the word ‘woke’” are opponents of the philosophy. From there, a campaign of language policing sputtered to life. “If you’re not black and started using ‘woke’ pejoratively sometime post-2018 or so,” Slate’s Joel Anderson wrote, “I think it’s fair to consider it a racial slur.” Pundits gathered to debate the word’s suddenly incomprehensible meaning. At the very least, the word had become decidedly unhip, according to the online language-learning platform Preply. Its survey found that Baby Boomers are the “most likely generation” to use the word, which is the fourth-most-hated slang term they tested.

Much in the way that the constellation of academic concepts encapsulated in the discipline “critical race theory” suddenly became a way to express coded “dog whistle” racism, the race is on to intimidate anyone who would use this once ubiquitous and celebrated badge of progressive enthusiasm as an insult.

Though he was raging against the new reality progressives are gradually coming to acknowledge, New York Times columnist Charles Blow has it right. “‘Woke’ is now almost exclusively used by those who seek to deride it, those who chafe at the activism from which it sprang,” he writes. “Opponents to the idea are seeking to render it toxic.” Indeed. And they are succeeding.

The left’s outrage is a product of their recognition that “wokeness” is a failing brand. It conjures in the minds of its opponents and skeptics a new “enlightened” posture toward racial dynamics that sees people not as individuals but as products of their environments and the accidents of their birth. It has become associated with hostility toward the blind conduct of justice; everything from high evidentiary standards for criminal convictions to the right to confront your accuser in court are contemptible artifacts of the “white man’s culture.” It is hostile toward free expression, racial integration, and intuitive truths such as the idea that men and women are biologically distinct, and race is a fluid construct—not a static feature that sets people on a predetermined course in life.

An ideologically diverse coalition has risen up against this ideology with the explicit intention of anathematizing “woke” and all its sundry tenets. The progressive backlash against a word of their own design is evidence that these efforts are bearing fruit. A nascent rebranding campaign is now underway. But whatever comes of that brainstorming session, this ideology’s oxygen generators are still improperly stowed. It will continue to malfunction on the tarmac. The product social-justice enthusiasts are pushing will still conflict with the principles and freedoms that underwrite the American experiment no matter what you call it. Slapping a new coat of paint on a defective vehicle won’t make the thing fly. 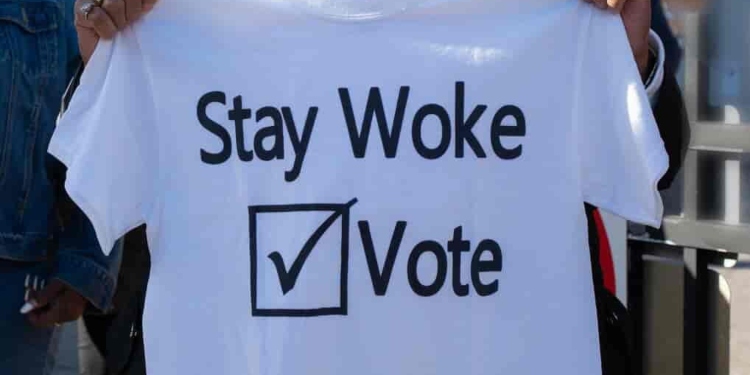