President Barack Obama warned the nation in September of 2013 that, if the United States did not pursue military action against Bashar al-Assad, it could soon become easier for terrorist organizations to obtain and use chemical weapons. He was right.

“If we fail to act, the Assad regime will see no reason to stop using chemical weapons,” Barack Obama said in a prime-time address to the nation. “As the ban against these weapons erodes, other tyrants will have no reason to think twice about acquiring poison gas, and using them. Over time, our troops would again face the prospect of chemical warfare on the battlefield. And it could be easier for terrorist organizations to obtain these weapons, and to use them to attack civilians.”

Of course, America did fail to act. The rest is tragic history, and the grim future that the president foretold in his prime time address has only just begun to come to pass. According to a TIME Magazine analysis of police reports, an Iraqi police position just south of the city of Kirkuk was shelled in early May by ISIS fighters using what is now believed to have been chemical munitions.

This isn’t the first ISIS attack using chemical arms believed to have been taken from Assad’s stockpiles. In March, the Associated Press revealed that ISIS staged a two-stage chemical attack in Northern Iraq that wounded over 600. “The US-led coalition said the chemicals Isis has used so far include chlorine and a low-grade sulfur mustard,” the AP reported. ISIS reportedly deployed mustard gas against Syrian government soldiers in April. In fact, ISIS has been liberally deploying chemical agents confiscated from Syrian army positions since at least August of 2015.

The president was correct to warn of the consequences of inaction, as they have come to pass. His more ominous admonitions have yet to manifest, but they probably will. The erosion of the international norm prohibiting the battlefield use of weapons of mass destruction (particularly one as common as chemical weapons) is uniquely threatening to American armed forces, which are deployed globally and are the equivalent of the world’s first responders. American men and women in uniform are already deployed to battlefields characterized by chemical warfare in Iraq and Syria. These are unlikely to be the last nightmarish killing fields to which American soldiers will be sent.

“This is not a world we should accept,” Obama said. It was a shame that he never meant it. That is a world as it now is, and it is a world that we have accepted.

This was just one of the many ill-considered statements in what historians may look back upon as the most muddled, contradictory, and self-defeating of the Obama presidency.

This was a speech in which the president touted the necessity of strikes for a “just” cause, particularly one as obvious as retaliation against a dictator who had used chemical weapons to execute genocidal attacks on civilians. This was a speech in which the president made the case that, the failure to contain the spiraling civil war in Syria would inevitably result in the conflict spreading to neighboring nations like Iraq, Jordan, and Turkey. And yet, despite the president’s willingness to buck public opinion in order to deploy U.S. forces into combat and training missions all over the world, this was a speech in which Obama deferred to a skeptical Congress. Even if only to authorize airstrikes on a narrow set of regime targets, the president requested war powers, and only because he was reasonably certain he would not get them.

That wasn’t the president’s only failsafe that would prevent him from finally making good on his August 2012 “red line” for action in Syria. This was a speech in which Obama revealed that Russian President Vladimir Putin had agreed to help broker a temporary resolution of the conflict between the Russian client in Damascus and the West. Assad would surrender his chemical weapons stockpiles in order to avoid further military action. In hindsight, this approach was misguided. Assad did not surrender his stockpiles of chemical weapons, and military action over the skies of Syria was merely postponed. Assad’s regime, however, was spared the vengeance of the Western powers – he continues to slaughter his people even today.

In leaning on Putin to broker peace over the skies of Syria, Obama demonstrated Washington’s reliance on the Kremlin to serve as a diplomatic lever not merely in Syria but in talks with Iran over its nuclear program. It is likely that this reassurance emboldened Putin and convinced him that few consequences would follow his invasion and annexation of Ukrainian territory just six months later. Almost precisely two years after Obama’s address, it was Russian forces that were aggressively intervening in the Syrian civil war to secure Assad’s position.

“Others have asked whether it’s worth acting if we don’t take out Assad. As some members of Congress have said, there’s no point in simply doing a ‘pinprick’ strike in Syria,” Obama said. “Let me make something clear: The United States military doesn’t do pinpricks.” In this overly dramatic rebuke, the president was responding both to members of Congress and his own Cabinet. Amid the administration’s failed effort to drum up support in London for a coalition strike on Assad, it was his own secretary of state who suggested the forthcoming military action would barely be noticed. “That is exactly what we are talking about doing, unbelievably small, limited kind of effort,” Secretary John Kerry said during a joint press conference with Britain’s foreign secretary.

That admission followed a New York Times revelation that the Pentagon’s target list included fewer than 50 regime sites. “One U.S. official who has been briefed on the options on Syria said he believed the White House would seek a level of intensity ‘just muscular enough not to get mocked,’” read a report in the Los Angeles Times. In his rebuke, was the president correcting Republicans, Democrats, America’s British allies, or the members of his own Cabinet? Perhaps the answer is all of the above.

“What kind of world will we live in if the United States of America sees a dictator brazenly violate international law with poison gas, and we choose to look the other way?” asked the president. He closed the speech by asking the country to summon up the resolve to punish Assad while simultaneously justifying his predetermination to stay his hand. It was the most confused and irresolute speech given by a sitting American president in living memory. It was, however, not without its share of pertinent warnings. The horrors the country would invite if America declined to act are upon us. How many more will follow? 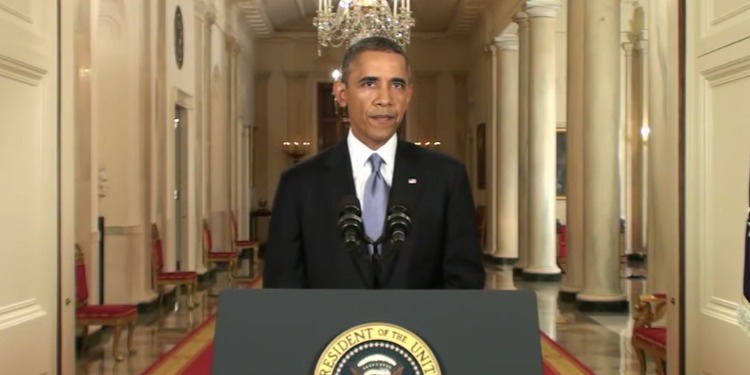