In the Western world, a pernicious idea has gained some popularity. Western liberalism of the sort forged in the Enlightenment, the faddish notion goes, is a spent force. Liberalism and its products (like the American Constitution) render the societies beholden to them soft. They are unable to compete against nations that subscribe to more muscular belief systems. Moreover, liberal ideals contribute to the atomization of society, unmooring its constituents from anything durable. Liberalism’s time, some insist, has come and gone.

Tell that to the Ukrainians. They have suffered mightily for two decades in the pursuit of nothing more than self-determination and economic independence.

Ukrainians took to the streets in January 2005 following the suspicious and disputed election of the Kremlin’s man in Kyiv, Viktor Yanukovych, who stood athwart economic integration with the European Union. The government that the “Orange Revolution” produced sought but never met the conditions necessary to achieve integration into Western institutions, and Yanukovych eventually ascended to power legitimately. But Ukraine’s desire to join the community of European nations did not abate.

Yanukovych, whose appeal was more pronounced in Ukraine’s once openly pro-Russian eastern oblasts, set out to make his country into a “neutral state.” Just days before a painstakingly negotiated free trade and association agreement with the EU was set to become law, Yanukovych scuttled the deal citing pressure from Moscow. Again, Ukrainians took to the streets. In February 2014, heavy-handed attempts to disperse pro-EU demonstrations transformed the unrest into open revolution, and Yanukovych fled the country for exile in Russia. Now, with Russia engaged in an outright war of regime change against Ukraine, Moscow’s thuddingly unimaginative solution to the crisis is reportedly to bring Yanukovych back from exile to serve as Putin’s puppet once more.

No one should have any illusions about Ukraine. A fledgling democracy with endemic corruption, its liberal impulses are often tempered by the constraints of its culture and history. The aspirations of the Ukrainian people are, however, perfectly clear to anyone willing to believe their own eyes. Those aspirations are being crushed with reckless force by a revisionist power that is as committed to illiberalism as any government on earth.

The Russian state has used the opportunity provided by the war in Ukraine to re-Sovietize the information landscape. Moscow has killed off the last few remaining independent media outlets and criminalized not just dissent but rhetorical accuracy. Its 1993 constitution isn’t worth the paper it’s printed on. Vladimir Putin’s will is the final arbiter of events inside the Federation. Putin appears to view the Westphalian conception of statehood as outmoded, preferring ethnic categories to the artificiality of borders. The Kremlin is so obsessed with sentimentalized historical notions of what Ukraine was that it cannot abide what Ukraine objectively is. This—not the romantic, agrarian, pre-modern covenant that exists only in the minds of Western dilettantes—is what illiberalism looks like in practice.

The fight for a free Ukraine rages on, but the battle to preserve the liberal character of Hong Kong from Chinese totalitarianism is definitively lost. There, the struggle for the essential fundaments of liberalism was even more explicit.

In its quest to smother the spirit of freedom in Hong Kong, China pulled out all the stops. The People’s Republic flagrantly abrogated the Sino-British Joint Declaration guaranteeing Hong Kong’s status. It criminalized political activism and free thought under the guise of fighting “separatism, subversion, terrorism, and collusion with foreign countries.” It brutally subdued tens of thousands of Hong Kong residents who dared protest their subjugation. China did these things because it, similar to Russia, is invested in a romanticized idea of greater China, in which borders are defined by shared ethnic and cultural heritage.

The valiant citizens of this besieged city who resisted the Chinese onslaught did so explicitly in defense of classical liberal ideals. They carried American and colonial-era British flags. They sang the American national anthem. They held aloft signs demanding the very civil liberties codified in the Bill of Rights. They rejected the notion that their shared culture, language, and geography—their tribe—should define them. Instead, they hoped to be governed by their creed: liberty.

Liberty is an idea in bad odor among a narrow but influential set of thinkers whose livelihoods are enabled by liberty itself. The West’s chief competitors for global dominance, Russia and China, are busily rebuilding a geopolitical order that has left liberalism behind. They’re doing so by force because they cannot otherwise secure the influence they hope to wield. We should all take a good, long look at the true champions of a post-liberal world. They’re on the march. 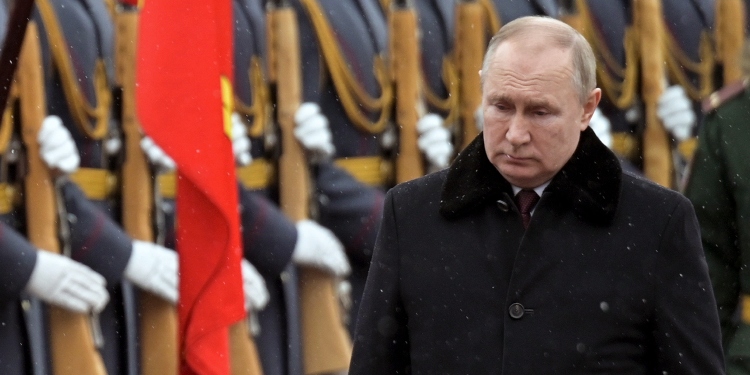