With the first votes in the pivotal Iowa caucuses and New Hampshire primary less than one month away and Donald Trump still perched at the top of national and early state polls (save a handful of surveys in Iowa), establishmentarian Republicans are starting to panic. Worse, according to some Beltway-based GOP operatives, is the prospect that Senator Ted Cruz is Trump’s most potent competitor. From the view of those Republicans who do not consider themselves insurgents, they are losing control over the nominating process. The candidate most palatable to this wing of the Republican Party, Marco Rubio, seems not to have lived up to his promise. Despite sky-high favorability ratings across all segments of the party’s voter base and that candidate’s undeniable communicative abilities, Rubio seems unable to break out from his low double-digit position in the polls. In stark contrast with the anxiety displayed by his influential supporters, Team Rubio seems imperturbable. They’ve played the long game throughout 2015, and they remain outwardly confident in the tactics they’ve determined will help Rubio emerge as the last moderate candidate standing.

In Iowa and New Hampshire, the Republican race is pretty well frozen. Save for Ben Carson’s implosion and Ted Cruz’s precipitous rise in polls of Iowan caucus-goers, Donald Trump remains a stable force in both states. Rubio’s appeal, too, remains generally steady. According to the Real Clear Politics polling averages, the Florida senator is gaining modestly in Iowa where he now polls in third place. In New Hampshire, a state that is traditionally more favorable toward non-evangelical candidates, Rubio polls in a distant second place behind Trump.

From Rubio’s vantage point, this is a fine position to occupy for the presumed “establishment” favorite. The senator’s January strategy is conventional, but one he reasonably believes will help him emerge as the only viable alternative to Trump or Cruz. It consists of relying heavily on an overwhelming television advertising salvo combined with a critical mass of endorsements from party elders and sitting conservative legislators. The blitz is already on. To counter a slew of anti-Rubio messages on Iowa television and radio, the candidate’s campaign and allies are ready to flood the zone with over 7,000 ads scheduled to air between now and February 1. According to the Des Moines Register, fully one-third of all pre-caucus ads will originate with Rubio’s campaign or the pro-Rubio PAC Conservative Solutions. Moreover, Rubio has also been amassing the support of key conservative legislators, the most recent of whom include Representatives Jason Chaffetz and Trey Gowdy. With Donald Trump and Ted Cruz generally viewed unfavorably by a majority of the federal legislature, Rubio’s team is wise to expect more endorsements to follow.

Presuming that Ted Cruz emerges victorious from the Iowa caucuses, a feat managed by every Bob Vander Plaats endorsed candidate since 2008, Rubio expects to come in a respectable third or even fourth place. Rubio’s likely accurate assumption is that the rest of the field of moderate candidates will trail his Iowa showing substantially – perhaps even by double-digits. That would precipitate substantial movement in another frozen race: New Hampshire’s.

There, a perfect moderate lane pileup has created what should be very unstable conditions. According to the last three polls of the Granite State, Jeb Bush, John Kasich, Chris Christie, and Rubio all poll within an average of four points of one another. Combined, their vote could tie or even overcome Donald Trump, who polls consistently in the low 30s since November. If the race were to remain static, however, all the moderate candidates would split the state’s establishmentarian vote and yield a victory for Trump. But Team Rubio believes that the race will not remain static. They foresee the moderate vote coalescing behind Rubio, catapulting him into South Carolina and beyond.

They have a point; this equilibrium is unlikely to hold until primary day on February 9. A combination of saturation-level advertisements, two debates, and the results in Iowa will likely move votes. According to two recent surveys of both early states, large pluralities of voters are going to make up their minds about which candidate they plan on supporting late in the process – even as late as a few hours before their ballots are cast. What’s more, those candidates without the ability to translate a New Hampshire win into a national campaign (read: Kasich and Christie) are essentially spoilers. They are asking New Hampshire voters to cast protest ballots, and voters are less likely to cast a vote they ultimately believe will not matter. Rubio intends to be the logical choice for conservative voters who decline to back Cruz or Trump.

If this path is successful, Team Rubio believes they can translate it into momentum ahead of the delegate-heavy states that vote in the early spring and make their way to the convention in Cleveland the de facto or even the outright nominee. The problem with this strategy is that it is loaded with presumptions about how the race will play out, and any one cog in this Rube Goldberg device could fail when it is needed most.

For all the Beltway GOP’s earned frustration the Texas senator, a condition he courted from almost since the minute he began his campaign for U.S. Senate, a Trump nomination would be a nightmare for GOP office-seekers farther down the ballot. If the race winnowed down to one between the celebrity candidate and the self-interested Texan, Republicans would conclude that they are marginally better off with Cruz at the top of the ticket.

And that Solomonic choice is coming sooner than Rubio’s team would perhaps prefer. While they are banking that a few third and second place finishes in February can position their candidate well ahead of the March primaries, the damage that will be done to Rubio’s brand if he fails to win at least one of the February contests will be palpable.

For his composed unflappability, Rubio has been signaling that he hears the concerns of conservative voters and is adjusting his messaging in response. The candidate who once put his name to an immigration reform plan has since begun denouncing the infinitely malleable concept of “amnesty.” The Florida senator recently wrapped his arms around convening a Constitutional Convention of States; an idea that is more popular within the conservative grassroots and among media personalities than it is outside the activist class. Recently, he has deployed what the Washington Post called a “darker tone” on the stump. “People are angry. They are upset. They are frustrated,” Rubio told an Iowa rally. “We need someone who can articulate that anger and frustration effectively.”

A tea party senator who bucked the GOP and defeated a sitting governor to muscle his way into the Senate, Marco Rubio is as conservative as anyone in the field. The junior Florida senator doesn’t deserve the label “establishment,” but it’s one he’s been saddled with since his prospective nomination is an acceptable outcome for the party’s elected officials and donors. That says more about the evolution of the party than it does about Rubio, but primary races hinge on the narcissism of small differences. Rubio’s pathway to the nomination, while somewhat complicated, is not difficult to envision. If he cannot clear his lane, however, it will not be long into March before the party’s elites begin the process of coming to terms with Ted Cruz as the last viable Trump alternative. 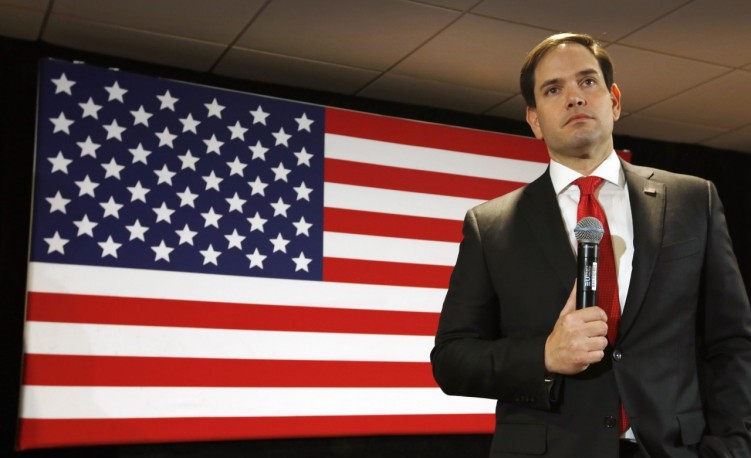