White nationalism is identity politics. Indeed, it is identity politics in its most primordial form. The leaders of the violent white supremacists in Virginia this past weekend may preach confidence-building and self-actualization but, like so many identity-first movements, they and their followers are steeped in historical grievance—because that grievance conveys authority. In their minds, that sense of oppression entitles them to compensation for the indignities they or their forbearers endured. There are now social incentives in place to claim victimization, and such claims have proliferated as a result. This phenomenon is almost universal to identity politics m movements, and the alt-right is no exception.

Holding court among a set of inexplicably present reporters at his home in Virginia on Monday, the white nationalist agitator Richard Spencer pled his case. “I have never [before] felt like the government or police were against me,” he whined. Licking his wounds from the hostile response by police to the violent protests in Charlottesville, Spencer and his white nationalist ilk have taken to insisting they were not afforded the protections due them as American citizens.

As Politico Magazine’s Ben Schreckinger wrote, the Charlottesville rally organizer Jason Kessler was attacked by counter-protesters and prevented from addressing the press at an after-event. Though police intervened on his behalf, Kessler contended that they should have been more proactive. “I blame the rank-and-file cops for being cowards who obey unlawful orders,” the alt-right activist Pax Dickinson told Schreckinger.

This kind of crippling self-pity didn’t sprout up among the alt-right overnight. “In a 2000 article, the sociologist Mitch Berbrier examined dozens of white supremacist media appearances and publications and discovered a pattern of carefully crafted victim ideology,” The Atlantic’s Olga Khazan wrote. “Victimhood, it seemed, is how the groups assured themselves they weren’t being racist—the excuse being that, hey, they’re suffering too.”

The white supremacist myth holds that America is no longer a safe place for members of the majority race. Though racial progress in America is measured in fits and starts, and the tempo of change is by no means constant, the privileges provided to whites and robbed of minorities in the name of racism are, in fact, constantly diminishing. Violent white supremacists who look around and see a country that is largely hostile toward them are correct.

This country does not look kindly upon white nationalism. In policy terms, despite having a sympathetic figure in the White House, even the alt-right is virtually impotent. Why do you think they’ve taken to the streets?

It is the height of irony, then, that traditionally marginalized groups have actually been mimicking the woeful white nationalist’s sense of helplessness, which has been a mainstay since Reconstruction. Identity-based political movements once devoted to the pursuit of dignity and empowerment are increasingly dedicated only to maintaining their own galvanizing sense of grievance.

As the author and essayist Bruce Bawer (who has a wonderful memoir in the current issue of COMMENTARY) observes in the introduction to his book The Victims’ Revolution: The Rise of Identity Studies and the Closing of the Liberal Mind, the formerly unchallenged liberal idea of a shared American identity has become anathema to the left. By focusing on the phenomenon of identity studies on college campuses, he observed in microcosm the “preoccupation with the historical grievances of certain groups” is a menace to that ideal. It was, in essence, a fixation on victimization and the currency acquired by those with a legitimate claim to it. The alt-right may look upon this with derision, failing to recognize themselves in their adversaries.

The white nationalist right and the identity-obsessed left speak different languages but use the same vocabulary. To a great extent, both perceive themselves to be the victims of a system that is biased against them at an institutional level. Both believe that the other is wildly exaggerating and, in fact, that the system is tilted in their favor. In this narrow sense, one group is a funhouse mirror reflection of the other. This observation will doubtless elicit howls of bitter protest from both groups as a wildly unfair assessment of their respective movements. So be it. 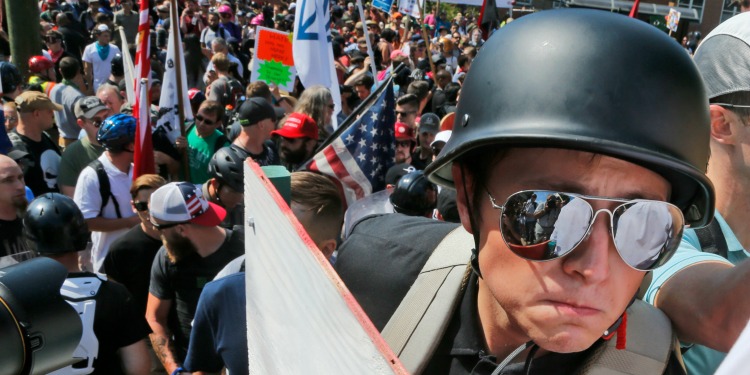