While researching a subject on Monday, I clicked on a link to an opinion piece hosted on CNN’s website. This news outlet is one of many media venues that serves up most of its offerings with an ancillary embedded video that is  supposed to augment the reader’s experience. The video—which no one wanted to see in the first place—plays automatically, startling the reader with an unexpected aural bombardment. On this occasion, though, the intrusive video proved useful.

The clip featured President Joe Biden delivering a solemn address to the nation on Memorial Day. And though I lunged for the pause button, I was still privy to the first five seconds of the selected clip in which the president said the following: “You know, America’s been forged in the basil and the fires of war.” Go listen to the clip yourself and check my work.

Now, my first thought was that this was just another verbal flub to which Biden is prone, and he clearly wanted to say “battles.” But my second thought was less charitable: How had this not been brought to my attention for over a week? How is it that the industries built around cultural and political commentary failed to dwell on the objective hilarity of the “basil” of war? On a conceptual level alone, the potential for herb-and-spice-related puns is off the charts. Where are our caustic satirists, who spent the last four years mining every last ounce of humor out of the seemingly endless reservoir of comedy provided by our last president?

This fodder for professional joke writers must have required some effort to ignore, not that they aren’t already invested in protecting Biden’s image. In March, author and columnist Richard Zoglin wrote with sympathy about the obstacles comedy writers encounter amid their efforts to satirize the “impregnable” Joe Biden. “The voice is too bland and devoid of obvious quirks, and beyond the occasional “C’mon, man,” he wrote, “his conversational manner too muted and self-effacing, to give the parodists much to work with.” New York Times reporter Adam Nagourney agreed: “It’s hard to parody Biden. He’s not polarizing, and people tend to find him likable,” he wrote. “His ticks aren’t that interesting.”

That wasn’t true at the time, and it most certainly isn’t true now. And yet, the conspicuous reluctance persists.

Perhaps this reticence to acknowledge the humor value in our current moment is born of genuine humanity—a humanity Biden’s allies encourage by hurling an endless volley of brushback pitches at Biden’s critics with the aim of branding anyone who makes note of his regular verbal miscues “ableist” or “agist.” Or maybe our greatest comic minds cannot see what’s so funny about giving the wrong sort of people something to laugh at; something that detracts from the mystique of this president and, thus, undermines the progressive project. In either case, the job description has taken a backseat to a mission of more importance than a harmless laugh.

Though this suffices as an explanation (if not an excuse) for the gentle coddling to which America’s comic minds have treated Joe Biden, fate has handed our material-starved humorists a reprieve in the form of Vice President Kamala Harris.

In a recent interview with MSNBC’s Lester Holt, Harris was pressed to explain why she has yet to visit the U.S.-Mexico border nearly three months after the president tapped her to lead the administration’s efforts to stem the ongoing migration crisis. What followed was a comedy writer’s dream.

“You haven’t been to the border,” Holt said, restating the premise of his clearly unnerving question.

“And I haven’t been to Europe!” Harris laughed nervously. “And I mean—I don’t understand the point that you’re making.”

Now, comedic professionals are surely capable of rationalizing their way out of the tough spot this White House has once again put them in. Gently poking fun at Harris for being a player in a scene that could not have been scripted any better risks one being called “racist” or “sexist” by partisan Democrats who rightly fear the subversive power of satire. It threatens to undermine the cult of personality the “Biden-Harris administration” has tried to erect around the maladroit vice president. But that’s not just an abrogation of a professional duty. It cedes the field to amateurs who are less willing to subordinate the mechanical physical responses humor produces to an intellectual exercise in partisan cheerleading. And if amateurs are the only purveyors of what comedy consumers want, that’s where audiences will go. 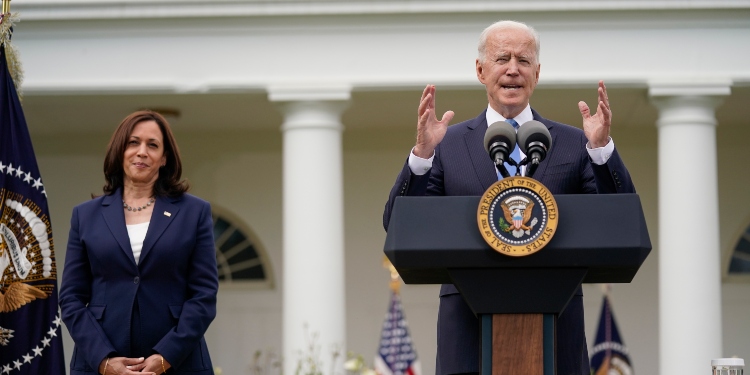