Why is Joe Biden’s White House pretending that the urgent national-security crisis in Afghanistan is not, in fact, an urgent national-security crisis? Why did Joe Biden spend a week, during which the Afghan government fell and  untold thousands of Americans were stranded behind enemy lines, determined to finish out his vacation in Camp David? Why did he devote precious moments this week to delivering a speech on COVID booster shots and touting his efforts to work with House Democrats toward advancing his “Build Back Better” agenda? Why? Because the White House thinks that you don’t care about American interests, soldiers, and allies anymore. The administration thinks your patriotism is entirely transactional. So long as your comforts are uninterrupted, you won’t care about the disaster unfolding overseas.

“President Joe Biden is brushing off criticism of his administration’s chaotic Afghanistan withdrawal because he and his aides believe the political fallout at home will be limited,” Reuters reported on Friday, citing “White House allies and administration officials.” These officials base this rationale on “internal and public polling” indicating that the American public supports pulling out of Afghanistan, whatever the cost. They assume that voters don’t care how that objective is secured.

The Reuters report dovetails with an item published on Friday in The Atlantic. “The administration is hoping that grisly images of desperate Afghans clinging to a C-17 fade, replaced by collective relief that no more Americans will die in a murky, brutal war that spanned two decades and four presidencies,” White House correspondent Peter Nicholas wrote. According to the “people close to Biden” with whom this reporter spoke, the Afghan crisis will be a distant—perhaps even pleasant—memory by the 2022 midterm elections, much less the 2024 presidential race. Indeed, the insiders Nicholas spoke with framed the Afghanistan crisis as another myopic fixation of the Washington bubble—one that average voters outside the Beltway will subordinate to pocketbook issues and the ongoing pandemic.

We can only pray that these too-clever political strategists are wrong.

The bet they’re making is predicated on the assumption that you are hopelessly jaded and callous. The Biden White House is guessing that you don’t really care about credible reports involving the beating and detaining of American citizens by the Taliban, who we have entrusted with the preservation of our interests and security in Afghanistan. They’re hoping you won’t mind it when the tens of thousands of Afghans who aided our counterterrorism efforts overseas are left behind to face a gruesome fate. And they’re presuming that, even if that gets worse (which it almost certainly will), your parochialism will overcome your instinctual revulsion at the horrible images you are about to be forced to witness.

The Biden White House is hoping you won’t care about the metastasizing terrorist threats that are sure to incubate in a Taliban-run Afghanistan (an assessment that even Democrats do not question). They’re operating under the assumption that the loss of reliable intelligence from Afghanistan won’t matter, and we can continue to deter and disrupt terrorist operations from the Persian Gulf.

They’re hoping that you won’t mind the loss of American influence among ally and adversary alike. Sure, there might be slight disruptions to global commerce as China reasserts its influence in the Pacific, but you’ll absorb the higher price of consumer goods if it would mean defending our partners against subjugation.

They’re sure that the Atlantic Alliance’s deteriorating cohesion won’t have any impact on how you vote, even if that deterioration leads Moscow to test its freedom to reconquer territory in Europe or force Americans to confront the prospect of a military conflict with Russia over something so piddling as the independence of the Baltic states. They’re hoping you don’t care about global security; only your own.

In short, the Biden White House is making a big bet: It’s betting that America is finished as a global superpower and that you will welcome our decline. We’re about to learn something about this country. We’re going to learn whether the Biden administration’s gamble is correct—that you are willing to slough off the burdens associated with being a beacon of global freedom and a pillar of geopolitical stability. They’re assuming that you are so cynical and so wedded to the amenities our untested global power has provided us that you won’t tolerate any interruption to them. They think you’re beyond hope.

Let’s pray that we can still prove them wrong. 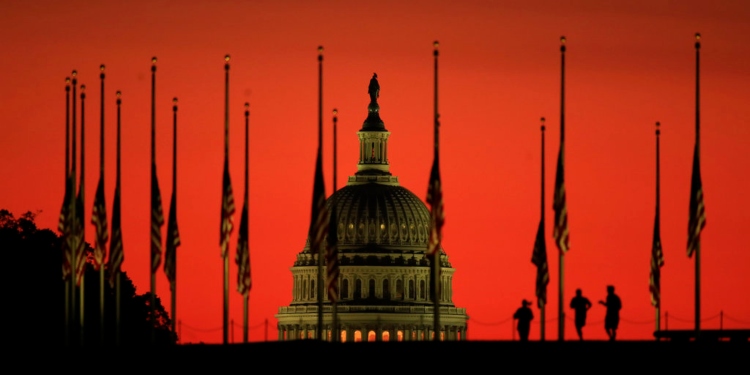