It’s been a rough decade for organized labor.

Over half the states in the Union have passed Right to Work laws in some form, which allow workers in unionized industries and shops to decline or resign membership and avoid paying dues into organizations to which they don’t belong. The trend against the practices employed by organized labor culminated in the 2018 Supreme Court decision in Janus v. AFSCME, which found, on constitutional grounds, that public-sector unions could not compel non-members to finance political causes they do not support. Private-sector unionization has been in decline since 1983, but it hit rock bottom in 2019 when just over 6 percent of the workforce belonged to a union. The public-sector unions AFSCME and SEIU have seen their agency-fee payers decline by 98 and 94 percent, respectively, despite stable membership.

In combination with the rise of sharing services and the unconventional employment opportunities they present, these trends have driven organized-labor activists quite mad. Moreover, the phenomenon explains why no one in the Biden administration can say the word “job” in a positive context without qualifying it with the word “union” first. And these pressures are the only logical explanation for why this White House courts a political backlash by insisting that conjectural, non-existent unionized jobs should replace real, ongoing employment opportunities. After all, as Joe Biden’s climate envoy John Kerry said, “What President Biden wants to do is make sure that those folks have better choices,” as opposed to the suboptimal choices they’ve made for themselves.

With the ailing unions in mind, the bleeding edge of progressive neurosis, the state of California, embarked on a mission to save the public from its best interests. In 2019, the state passed AB5, a law designed to remedy the supposed inequities and abuses imposed on us by the so-called “gig economy.” The law was hailed by progressive reformers as a “victory for workers” because it imposed traditional employment practices on firms with an alternative model. The practical effect—indeed, the desired effect—of the law was, however, to make freelance labor less attractive. And the results were fairly catastrophic.

Independent writers, graphic designers, photographers, and creative-content producers suddenly found themselves out of work. Self-employed journalists lost their venues and their beats, compelling publications to hire out-of-state reporters to cover hyperlocal issues. Performing-arts groups, including the Tahoe Music Festival and Island City Opera, all but ceased operations. Those were just the unintended consequences. The law’s intended targets were the ridesharing firms Uber and Lift, which had been chewing into livery union dues for years. They were only spared by the citizens of California, who secured a proposition on the ballot in 2020 defining “app-based transportation” drivers as independent contractors—a measure that passed by a margin of nearly 3 million votes.

California’s lawmakers have been trying to “fix” this terminally flawed bill ever since it passed, but that’s of no consequence to the social engineers who make up the Democratic majority in the House of Representatives. This week, the House once again passed a labor-reform law crafted in 2020 that seems to have been modeled on AB5, and its effects would be just as disastrous if it were to become law.

The Protect the Right to Organize (PRO) Act would impose the so-called “ABC Test” on all employers. It reserves independent-contractor status only for those doing work that they control, and that they are incorporated to perform, and that falls outside the scope of a contracting firm’s normal business. Advocates insist they’re just trying to extend National Labor Relations Act protections to all workers, but the law would effectively impose AB5’s restrictions on independent contractors and eliminate a freelancer’s competitive advantage across state lines.

“The PRO Act would allow unions to override such laws and collect dues from those who opt-out, in order to cover the cost of collective bargaining and administration of the contract,” National Public Radio reported. This wouldn’t likely overcome the Supreme Court’s ruling in Janus, which found that public-sector unions were infringing upon the rights afforded Americans by the First Amendment. But it would supersede Right to Work laws and compel non-members to contribute to unions and the Democratic Party organs they support with those funds.

The PRO Act would prohibit employers from trying to influence unionization elections, which often takes the form of mandatory company-sponsored meetings at which firms lobby against organizing. But employees would be allowed to cast unionization ballots remotely and outside their places of employment, allowing activists to influence those same elections in ways employers legally cannot.

The bill would allow union organizers who fail to reach an agreement between labor and management on a first contract to appeal to arbitration and mediation after just 90 days. The PRO Act all but overrides a 2018 Supreme Court decision in Epic Systems Corp. v. Lewis, which allowed employers to seek individual arbitration agreements, collectivizing otherwise disparate labor disputes and, as one study put it, forcing companies to “defend against broad litigation from an expanded pool of ‘employees.’”

Ultimately, the decline of organized labor in the United States was an organic phenomenon. It was the outgrowth of new technologies, increased geographic and career mobility, and the passing into history of a time when many people spent their entire lives employed by a single firm. It was a byproduct of progress, and progressives couldn’t resent it more. In their effort to roll back the clock and make their union donors healthy again, Democratic activists in Congress would impose California’s folly on us all. 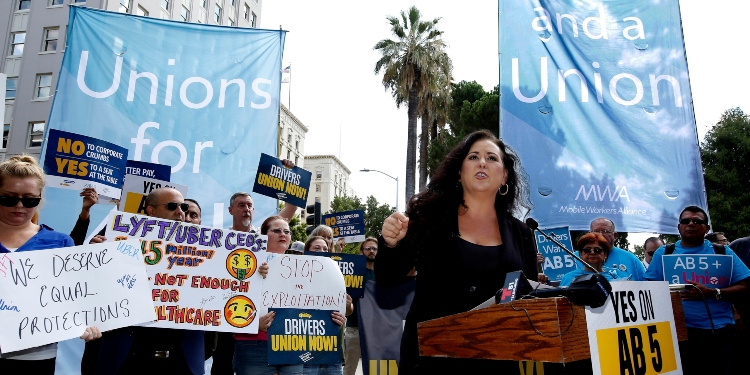