Upon initial inspection, Bernie Sanders’ near monolithic appeal to America’s youngest voters is perplexing. Why would the first generation of the 21st Century gravitate toward a living relic of the 20th Century who has made it his objective to rehabilitate the very worst idea of the 19th Century? Some say that it is a lamentable aspect of the modern age that history is poorly taught, and its lessons must be eternally relearned. The appeal of Bernie Sanders-style socialism may, however, have as many roots in the simple absence of a degree of prudence and wisdom, qualities that cannot be conferred in a classroom.

A number of surveys have demonstrated that younger voters under the age of 30 have maintained an infatuation with the ideal of socialism. “In fact, millennials are the only age cohort in which more are favorable toward socialism than unfavorable,” wrote The Federalist’s Joy Pullmann and the Cato Institute’s Emily Ekins. They present a compelling litany of reasons that seek to explain why the socialist project fails to repel the Millennial generation as it does their elders. The end of the Cold War, the deferred costs of education, historical whitewashing, a culture that rewards participation rather than achievements, and simple ignorance, they contend, have rehabilitated the collectivist idea. This is all fair, but a factor that they fail to note and which cannot be divorced from the appeal of socialism is the romance inherent in any dramatic social upheaval.

Chicago Tribune reporter Ron Grossman performed a service with a recent confessional in which he revealed that his youthful attachment to Marxist ideology never truly abated. “Perhaps it is impractical. But it’s enchanting,” he noted in an effort to explain the present political moment. “And socialism has gone from a dirty word to the virtual lapel button of a grandfatherly senator who packs them in like a rock star.” In confessing his own attachment to the exciting allure of collectivist governance (as opposed to its efficacy), he exposes the socialist’s fatal conceit.

Grossman indulges in Marxian fantasy of historical inevitability. He contends that the middle class is shrinking and, as a result, socialism’s good name is being restored. The Middle Class is shrinking, but this is not altogether a lamentable condition. “[I]t’s important to note that the middle class is shrinking not just because more people are poor but also because more people are rich,” observed FiveThirtyEight’s Ben Casselman, citing Pew Research Center data. He noted that the data supporting what Pew dubbed “the hollowing out of the middle-class” reveals that most demographic groups have seen their income status rise since 1971, with the exception of Hispanics – a predominantly immigrant group that has inflated disproportionately in this period.

The vaunted working class that so frustratingly refused to develop a revolutionary consciousness in the early 20th Century is today just as irritatingly married to the promise of capitalism. The solution to this problem for socialists is today the same as it was in 1905: these obdurate fools who vote against their best interests require a “vanguard” to lead them toward the salvation with which they appear so disinterested. According to Grossman, this revolutionary spear point of the socialist movement will be a class of entitled undergraduates who have been robbed of the “enhanced earnings they were promised when they went to college.”

It is a historical accident that the ideals of socialism enumerated by Engels and popularized by Marx are linked to the drama of revolutionary sentiment as they were birthed in the tumultuous year of 1848. It was in this year that a wave of popular revolutionary sentiment swept the European continent and, through some clever public relations work, was coopted and linked to the idea of revolutionary progressivism. This brand of radical social reorganization was not the work of Marx or Engels alone. Before progressivism was popular, there was Robert Owen.

Born in 1771, Owen suffered the same messianic complex that so often afflicts revolutionary socialists. He was, however, by no means initially anti-capitalist. The Welsh-born industrialist made a name for himself as a mill owner in Scotland, where he not only produced goods but produced a new way of life. The employees who lived on his property were accrued the benefits of a variety of reforms that were, in the early 19th Century, quite radical; the abolition of child labor, an eight-hour work day, and other social reforms. He also imposed on his employees a variety of codes of personal conduct, to which they were expected to conform or be punished.

Owen was a believer in a philosophy that has characterized so many revolutionary movements and which ultimately led to their downfall. Owen was an environmental determinist. He believed that mankind could be remade and his worst impulses abolished forever if he were raised in a sufficiently regimented society. Unlike the American Revolution, the product of which was a system that recognized the basest elements of human nature and sought to constrain it through a series checks on power, Owen’s philosophy was that of the French Revolutionary. It is the idea that mankind can be remade into a creature capable of realizing utopia.

Owen took his vision to Indiana where he pursued a radical new experiment in social organization. In 1824, he purchased an existing settlement and founded the town of New Harmony. This was a truly socialistic society in which private property itself was done away with. The fate that befell New Harmony is a familiar one. The idealists who were attracted to this communal society were intellectuals and experts, and not the workers whose lots he had so hoped to better. Productivity collapsed. Industries that had once thrived under Johann Georg Rapp – a German philosopher and leader of a religious sect called Harmonists who initially founded the settlement – withered or collapsed entirely. Within two years, and following a substantial amount of instability and tumult, the experiment failed. To account for this disaster, Owen did what all revolutionary socialists have done ever since in order to exculpate themselves for failure: he blamed the ignoble character of the participants in his great experiment.

Owen’s son was better able to diagnose the problem with New Harmony and, in so doing, identified the key failure of socialism. “All cooperative schemes which provide equal remuneration to the skilled and industrious and the ignorant and idle must work their own downfall,” he wrote, “for by this unjust plan, they must of necessity eliminate the valuable members and retain only the improvident, unskilled, and vicious.”

Who are Bernie Sanders’ supporters? While they are growing in number by the day as Hillary Clinton’s campaign limps toward the finish line, their demographic profile is relatively consistent. They are predominantly male, white, younger, have at least some college education, and reside in the middle of the income spectrum (making between $30 and $74,000 per year, according to Pew’s latest survey). This is a demographic profile that would be familiar to any of the utopian socialists who struggled with popularizing their vision over the course of the last 200 years. They are imbued with the imprudent self-assuredness that leads them to believe themselves capable enough to drag the unthinking masses into a better future, whether they want it or not.

Surely there are unique historical factors that have led to the rehabilitation of socialism in the United States, but there are also timeless traits of human character that have created this circumstance, too. There will always be those who are convinced of their own intellectual and moral superiority; who lack the wisdom to be cognizant of their own limitations. Perhaps no amount of education can ever change that. 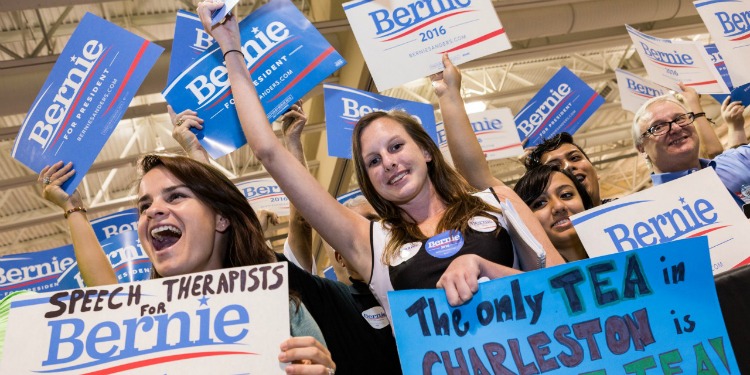