The Post’s comprehensive investigation uncovered a series of discrepancies in how the world measures greenhouse gas emissions by country, which led the paper to conclude that the data environmental crusaders are relying on “to save the world” is woefully inaccurate.

For example, according to its reports to the United Nations, Malaysia’s trees somehow manage to clear far more carbon from the atmosphere than the trees in neighboring Indonesia. Vietnamese refrigerators are shockingly efficient to the point that they release almost no fluorinated gasses, surpassing even the most technologically advanced models in the West. The soil in the Central African Republic can somehow absorb so much carbon that it offsets almost all the emissions produced by the Russian Federation. And so on.

It’s not just the developing world, which has managed to secure for itself what the Post discovered was “wide latitude” when it comes to its own reporting standards, that is a source of frustration. Big countries like China and Russia don’t even bother to produce accurate numbers around their methane emissions or join global frameworks designed to limit their production. Even democratic polities such as Australia and the E.U. are guilty of selective reporting, and big nations (including the U.S.) take advantage of an unmeasurable guestimate that allows them to deduct their landmasses from net carbon emissions. The result of both “incomplete reporting” and “apparently willful mistakes” in the data has led researchers into a state of apoplexy.

This can only come as a shock to anyone who doesn’t understand the dynamics of organizations that are global in scope, most of which rapidly become a cartel in service to the interests of the majority of its members: smaller, non-democratic states. Moreover, the tone of surprise on the part of this report’s authors is only possible if you were inclined to summarily dismiss conservative critiques of the Paris Climate Accords.

“Climate negotiators have known for decades that this data-gathering process is flawed,” the Post’s dispatch read, “but instead they have focused on persuading global leaders to engage in serious talks and take real steps to rein in emissions.” As climate researcher Philippe Ciais put it, “If the baseline is underreported, the percentage of emission reductions that you get will be flawed.” The self-reporting requirements in the Paris agreement are, according to atmospheric scientist Ray Weiss, “like the parties going on diets without ever having to weigh themselves.” In short, Ciais concluded, “everything becomes a bit of a fantasy.”

None of this should be surprising. When the Accord was reached in 2015, we knew that no member country had to commit to meaningful greenhouse-gas emissions reductions, much less accurate reporting requirements. We knew each nation’s pledge was voluntary, and their promises were met with almost no scrutiny. We knew that the Accord would provide political cover for developing nations to extract political concessions and wealth transfers from the developed world because there were no teeth associated with violating these self-set commitments. The best you could say of the Paris Agreement was that it received a larger buy-in from the developing world than its predecessor, the Copenhagen Agreement, but that came at the expense of the Accord’s efficacy.

Not that this will compel any of the Accord’s supporters to reexamine their priors. When the Trump administration announced its intention to withdraw from the Accords in 2017, the response from the political commentariat was downright hysterical. It was a “traitorous act of war” by the president. This was “the day the United States resigned as the leader of the free world.” It marked the triumph of “a different brand of American ideology.” Some enterprising neurotics even invented the category of “environmental racism” to condemn the Trump administration’s actions.

But Paris was just one of several hundred overlapping and often competing climate agreements that contributed to what the UN Environment Programme termed “treaty congestion.” And none of it has been very effective. After all, four years after the Accords were established, only two signatory nations had met their own self-set objectives: industrial powerhouses Morocco and Gambia. That is, if you can believe their stats.

Though it runs the risk of “pouncing,” anyone who looked skeptically upon the Paris climate agreement deserves a victory lap. Few were willing to buck the motivated consensus around what American Compass executive director Oren Cass wrote in these pages was essentially a “stapling exercise.” In the end, the world will have to satisfy itself with what Stanford University Professor Rob Jackson admitted was only “the sense that, at least the countries are providing something and participating and thinking about it.”

If thinking and talking about climate change was the international community’s chief objective, the world is wildly outperforming expectations. 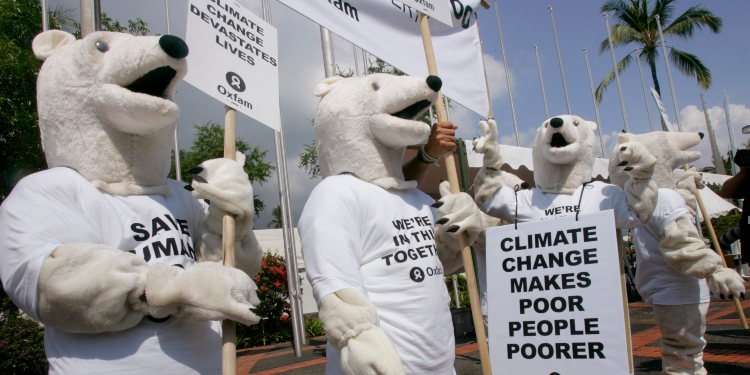