These are boom times for the busybodies.

If the lives of others are of paramount concern to you, the pandemic is a font of opportunity. For example, it is resolved that intoxicants like marijuana and alcohol are bad. Therefore, it is incumbent upon states in this, a time of crisis, to prohibit their sale. Now is the time to implement progressive agenda items by fiat. At least, that which is for our benefit but we, in our ignorance, have not adopted democratically. We should also do away with inconveniences like cars on urban streets. Why not? After all, with the state empowered to enforce prohibitions on so much conduct that was previously considered a dispensation of liberty, there is no better time to shoot for the moon.

For Americans who chafe under the restrictions that have either been legally imposed on them or are being enforced by social stigma, this is all far too presumptuous. Those dissenting voices are joined by at least one surprising ally: First Things editor R. R. Reno.

Reno loosed a series of thoughts on Twitter on Tuesday night mourning the “paralyzing safetyism” to which policymakers have deferred. “By the way, the WWII vets did not wear masks,” he wrote. “They’re men, not cowards. Masks=enforced cowardice.” He continued: “Now we know who want to cower in place. By all means, rage against those who want to live.”

The pandemic and its associated lockdowns have produced much scarcity, but few commodities are in as short supply as humility and sympathy. As a primal scream, Reno’s frustration toward mask-wearing—something no one enjoys but many believe to be necessary—is understandable. Moreover, it should be understood. Commiseration does not imply agreement.

And yet, of all the soft tyrannies of the lockdown, Reno has chosen the oddest of targets to rail against. Masking requirements, to the extent that they are compulsory, have largely been implemented by private individuals and institutions under the assumption that they support a social benefit: namely, the promotion of public health with the aim of creating conditions that would lead to the easing of restrictions on commerce and social gatherings. In sum, “the common good.”

At the very least, masking supports the “common good” as defined by those with the authority to dictate the definition of such a thing to us. That revelation goes a long way toward providing real-world substantiation of the argument against much of what the editors of First Things spent the last 12 months advocating.

It was just over a year ago that this intellectual journal published a manifesto, “Against the Dead Consensus.” That document inveighed against “tyrannical liberalism,” “economic libertarianism,” and “intoxicating new liberties” in favor of a communitarian vision backed by the coercive power of the state.

Many of the magazine’s editors and contributors have spent the intervening months casting aspersions on a variety of freedoms, which they deride as the self-adorned chains of permissiveness and venality. Freedoms of religion and “the value of free speech” may be curtailed in the name of social cohesion. Cutting back on these misbegotten virtues of an open society is supposedly necessary to resolving the various “crises” eroding our civic and cultural life. Liberalism’s central value proposition is “to ensure that no one is coerced,” but, the manifesto’s author’s wonder, is coercion really so undesirable?

Most on the right who took issue with the manifesto and its adherents’ subsequent affirmations focused not on the conventional social conservatism it espoused but on  enforcement mechanisms. The regime these authors envisioned would be empowered to destroy the only institutions standing between First Things and the abyss. The manifesto’s cosigners seemed to believe that they would be writing the rules for the new society they envisioned, but they would have also sacrificed the very provisions that provide for their ideological and religious protection. The practical application of their theory would sanction those with their hands already on the levers of power to impose their values on the public. After all, the crisis demands it. And there is always a crisis.

A movement that is composed of as many thoughtful individuals as is national conservatism should have the intellectual honesty to look around its newly truncated environment and reflect. The conditions Reno so resents are those that were determined to be, by both diktat and consensus, for the common good.

That policymakers appear to have no regard for those who find these conditions intolerable—soul-crushing, immiserating, and economically suicidal—is a function of the public’s presently authoritarian spirit. Those who protest against these restrictions are a rump–a dismissible faction of malcontents occupying the “wrong side” of the issue. It is only classical liberalism that lends these protesters any authority at all to, for example, petition their government for redress against actions like the shuttering of religious services and, on more than one occasion, win the argument.

In closing, Reno argued for a more individualized and tolerant lockdown strategy. “There are those who are terrified, and those who are not,” he observed. “Where do you stand? Terror or a more reasonable position? Will you visit our mother? If so, the mask is a PC gesture. If not, you are a moral monster.” In short, given how little we truly know about this disease, perhaps we should be more charitable toward those who seek to forge their own paths through this crisis. Mighty liberal of him. 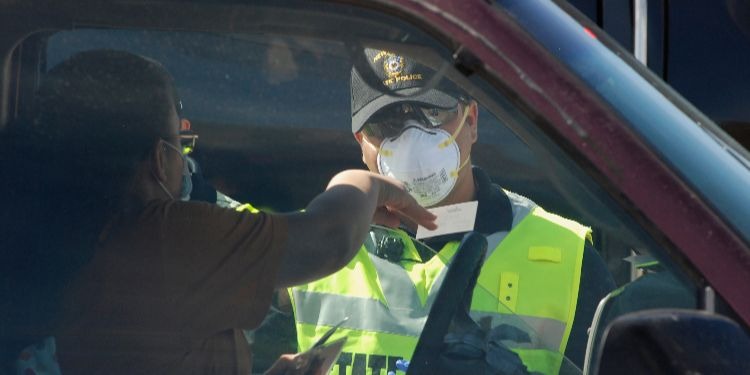