It’s late summer of 1998. Boy bands and Furbies are all the rage. Americans are being bombarded with unsolicited information about Brad and Jennifer’s nascent romance. And the nation is consumed by an entirely dishonest debate over the virtues of lying.

“Is it ever right to lie?” Philosophy professor Robert Solomon pondered in a syndicated op-ed. “Are all lies wrong? Or does deception serve such important functions as protecting us from harm, especially emotional harm?” In an infamous New York Times op-ed, author and JFK adviser Arthur Schlesinger Jr. answered in the affirmative to the latter question, especially as it relates to sexual peccadillos. “You lie to protect yourself, your spouse, your lover, your children,” he wrote. “Gentlemen always lie about their sex lives. Only a cad will tell the truth about his sexual affairs.” The question before the nation, the vanguard of Bill Clinton’s media praetorians insisted, wasn’t whether Bill Clinton lied in a deposition but whether he did so to serve some nobler end.

It’s no coincidence it was the 42nd president’s former communications director, George Stephanopoulos, who distilled the scandal around the White House down to its most Clintonian essence. “If he’s lied, he should tell all now, apologize, and hope for the best,” Stephanopoulos wrote. “If he’s shaded the truth, it’s time to amend the record.” Thus, the debate around Clinton’s conduct was pulled from the Olympian heights of Kantian ethics back down to the grubby earth, where it belonged. The matter before America, in Stephanopoulos’s formulation, wasn’t whether Bill Clinton lied under oath. It’s whether he lied adroitly.

Much like your old AOL account and Nokia phone, this debate is adorably quaint today. What we used to consider proficient lying is a rare sight. When judging the performance of political professionals tasked with defending the indefensible, we used to gauge their acumen by how closely they adhered to the truth. Lying with aplomb involved lawyerly evasions, selective omissions, and careful emphasis—what we used to call “spin.” Bald-faced mendacities that any layman could disprove were considered, if not disqualifying, embarrassingly gauche. Today, “spin” is increasingly a thing of the past. Egregious untruths are an accepted feature of political discourse, so long as the lies are told boldly and without the slightest indication that the liar suffers from any pangs of conscience.

Though they did not pioneer the tactic, the Trump administration’s senior communications professionals refined its practice. “This was the largest audience to ever witness an inauguration—period—both in person and around the globe,” former Press Sec. Sean Spicer insisted. This claim is easily debunked not just by readily available consumer data but the evidence of your own eyes. But it was the Atlantic’s Megan Garber who articulated why what Kellyanne Conway deemed “alternative facts” so offended the political class: It “isn’t merely their volume; it’s also their ineptitude,” she wrote. “The lies are lazy.”

The political class is no longer so offended by the lazy lie, it seems. Indeed, the lazy lie has become best practice.

“Prices have been essentially flat in our country these last two months,” White House Press Sec. Karine Jean-Pierre insisted on Monday in the wake of a report that found nothing of the sort. August’s consumer price index found food costs jumping by nearly a full percentage point in a single month. With the exception of gasoline, energy costs continued to rise. Shelter costs are up, as is the price of medical care, insurance, and education. Even a literal interpretation of the report’s topline finding that prices rose by 0.1 percent in August—a figure that would have been much higher but for the rapid decline in gas prices—doesn’t support Jean-Pierre’s claim, the caveat “essentially” notwithstanding.

This isn’t the sort of clever prevarication political media rewards, particularly since it was deployed to justify a pre-planned party on the White House lawn intended to celebrate the legislation the Democrats insist is anti-inflationary. Media’s initial impulse to tout how the report indicated that “inflation slowed for a second straight month” was soon replaced by casual contempt. “Biden celebrates ‘Inflation Reduction Act’ as food, rent prices climb,” Reuters reported later that day. After all, if the White House won’t play by the rules, why should the press?

“The border is secure,” Vice President Kamala Harris dissembled during a weekend appearance on NBC’s “Meet the Press.” If there’s an immigration problem in this country, she added, it is only that Congress has failed to establish a pathway to citizenship for the nation’s illegal immigrant population. When pressed to restate her unbelievable claim, Harris again insisted “we have a secure border,” adding the caveat “in that that is a priority for any nation.” So, notionally at least, the border is secure insofar as nations tend to secure their borders.

No one needs to peruse Customs and Border Protection’s statistics on illegal border crossings to identify the vice president’s deception, though that’s easy enough to do. One need only be privy to the images of migrants crossing over America’s unsecured borders by the hundreds, in places where overwhelmed border-patrol officers can do little more than corral them into temporary shelters. Again, the maladroitness of the lie seemed to occasion as much frustration as the lie itself. “We have this administration—now including the vice president of the United States—lying to the American people,” said one incensed former CBP official in an interview published by CBS News.

The press is not above mercilessly fact-checking even Joe Biden when his misstatements are egregious enough to warrant the scrutiny. The New York Times took a scalpel to Biden’s factually deficient April 2021 address to the nation, in which he contended that he inherited no vaccination plan from the former president and that Covid had killed more Americans than all the wars the nation fought over the last century. During America’s bugout from Afghanistan, just about every major media outlet in the country savaged the president’s cravenly self-serving efforts to convince the public not to believe their lying eyes.

But that’s the low-hanging fruit. The press is willing to legitimize the administration’s tendentiousness when the lies are clever enough and, therefore, provide the president’s supporters with the chance to demonstrate their own cleverness. It’s a safe bet, for example, that the conventional definition of a recession as two consecutive quarters of negative GDP growth will make a return when it’s convenient. In that instance, the White House wasn’t lying; it was presenting to the public a highly curated version of the facts. Indeed so curated that the omissions may well constitute deception. But no one was telling untruths. They were merely spinning. 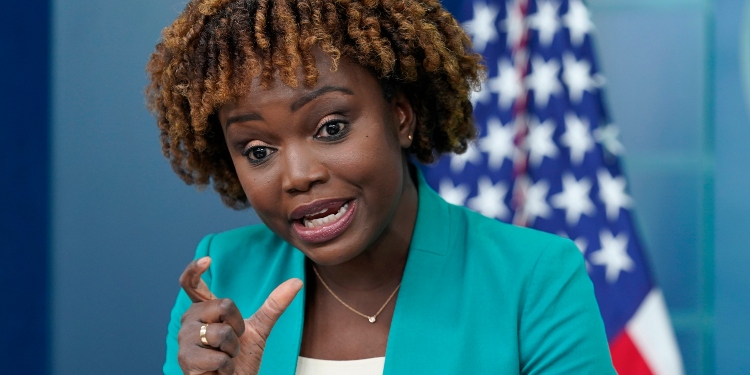