We are told, often bitterly and with a palpable hint of exasperation, that today’s “Democratic Socialists” are gentler than their name might lead you to believe. They are, they insist, cast more in the mold of Europe’s social democrats than the apparatchiks in tunic suits who haunt conservatives’ imaginations. Perhaps the leftmost reaches of the Democratic Party wouldn’t have to keep drawing this distinction if it was evident in anything other than rhetoric. When forced to choose between “democratic” and “socialist,” they opt decisively for the latter.

After years of privation, hardship, and popular—often violent—struggle against an illegitimate regime, the situation in Venezuela is coming to a head. A successor has emerged, making the powerful and corrupted military the ultimate arbiter of events, which are still very much in the balance. In a coordinated effort with most of the Western hemisphere, the United States endorsed the legitimately elected National Assembly leader Juan Guaidó’s interim claim to the presidency over the dubious one clung to by socialist despot Nicolas Maduro. To hear the “Democratic Socialists” tell it, the United States has orchestrated a “coup.”

“The United States has a long history of inappropriately intervening in Latin American countries,” said the Democratic Socialist’s patriarch, Bernie Sanders, in a statement, “we must not go down that road again.”

Contradicting Democratic Senator Dick Durbin, who commended President Donald Trump’s decision to back Juan Guaidó, Rep. Ro Khanna insisted that “the US should not anoint the leader of the opposition in Venezuela during an internal, polarized conflict.” Moreover, it should “end sanctions” against the Venezuelan regime. While we cannot assume that re-tweets constitute an endorsement, it’s unlikely that Rep. Alexandria Ocasio-Cortez was simply bookmarking her colleague’s pronouncement.

Though not an avowed Democratic Socialist herself, Rep. Ilhan Omar’s campaign staffers sure seemed to think she is a member of the club. It’s easy to see why. “A U.S.-backed coup in Venezuela is not a solution to the dire issues they face,” reads Omar’s tweet from Thursday night. “Trump’s efforts to install a far-right opposition will only incite violence and further destabilize the region.” Guaidó’s “far-right” affinities must be news to him and the social-democratic party he leads.

A statement from the elected leadership of the Democratic Socialists of America reads like an effort to mimic the hysterical tone familiar to students of Soviet diplomacy. If the nostalgia wasn’t already thick enough, the DSA alleges that U.S. sanctions on Caracas are intended to “make the economy scream”—a phrase attributed not to Trump but Richard Nixon in his effort to squeeze the Allende government in Chile. This “U.S. driven coup is totally unacceptable,” the statement continues, “and just the latest in a long history of U.S.-backed coups in the region showing blatant contempt not just for democracy but national sovereignty.”

The only people showing “contempt” for democracy are these self-described democrats. They hope to rest their case for Maduro on the notion that he is Venezuela’s legal president and Guaidó is not, but that is a flimsy claim.

Maduro and his predecessor, Hugo Chavez, spent over a decade throttling the country’s democratic institutions when they threatened their power. In 2015, when the opposition won two-thirds of the seats in the National Assembly, Maduro simply created a new legislature and packed it with loyalists. When the Assembly balked, Maduro had Venezuela’s rubber-stamp Supreme Court strip the Assembly of its powers—a move that led most of the region to break off relations with the rogue regime.

In 2017, 8 million Venezuelans turned out in an unofficial referendum to overwhelmingly reject changes to the constitution to codify Maduro’s power grab, but they were approved anyway in a fraudulent plebiscite disputed by opposition figures and observers alike. When they weren’t barred from the polls, Venezuela’s opposition boycotted a May 2018 presidential election that was rushed and declared neither “fair” nor “equitable” by foreign observers. By contrast, Guaidó’s provisional claim to the presidency is supported by three articles of the Venezuelan constitution, and the legitimacy of his election is uncontested.

The idea that U.S. sanctions on regime officials exacerbate a humanitarian crisis is dubious. Poverty and starvation in Venezuela are rampant. Basic goods are rationed, where they can be found at all. Venezuelans suffer from preventable diseases. Access to regular power and clean water is a luxury—one enjoyed only by the well-connected. Crime is a way of life for those unfortunate enough not to have fled this open-air prison. Narcotics trafficking is so rampant that even Maduro’s vice president is a well-known drug kingpin. The idea that international sanctions on these criminals are somehow responsible for Venezuela’s dystopian condition is both intellectually dishonest and morally bankrupt.

We are left to conclude that the Democratic Socialists who have joined hand with rogue states like Russia, China, Cuba, Iran, Nicaragua, and Bolivia have made a simple calculation: They like Maduro. And why shouldn’t they? He is the successor to a regime that exemplified socialism. The Chavistas nationalized vast swaths of the Venezuelan economy, expropriated and redistributed wealth and land, and seized foreign-owned property and assets.

The spectacular poverty endured by this once wealthy state must be the result of sanctions on regime officials, the kleptocratic bureaucracy, or collapsing oil prices (though no other petrostate has suffered so acutely). The violence routinely meted out by this besieged regime must be fabricated. It simply cannot be that a system that fails the same way every time has failed again in precisely the same fashion yet once more. Too much pride is at stake.

You’re going to hear a lot about how these self-described socialists aren’t really defending self-described socialism in Venezuela. To do so would discredit the enterprise. So, they will scramble for more familiar terrain. America’s imperialist policies are to blame for Venezuela’s plight. So, too, are the corrupt mandarins who squeezed the lifeblood out of the Bolivarian experiment. Anything to confuse and deflect. But it is the world’s socialists, not its democrats, who are standing athwart the desire of Venezuelans to live free. And they will be to blame if those hopes are crushed. 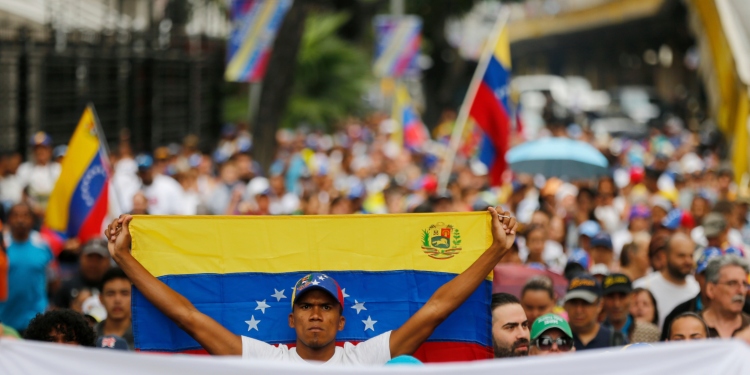