For a while, it looked as if Amy Coney Barrett’s nomination to the Supreme Court might end up as a net advantage for Democrats.

On September 26, the day Donald Trump formally nominated Barrett to the high court, a Morning Consult/Politico survey found that support for her confirmation languished in the low 30s. Only seven-in-ten Republicans favored her confirmation outright. In the days that followed, a variety of polls showed that a large plurality or even a majority of voters opposed Republicans’ efforts to violate the standard they set for themselves in 2016 and confirm Barrett before Election Day. And both Barrett’s confirmation and the event that preceded it, the death of Justice Ruth Bader Ginsburg, helped Democrats and Democrat-aligned independent organizations raise tens of millions of dollars.

And then Democrats blew it.

Unlike devoted and unpersuadable partisans, voters do not see the Supreme Court as just another stage on which the drama of electoral politics plays itself out. And the more the public got a closer look at Barrett, the more they warmed to her.

After a two-week media blitz, that same Morning Consult/Politico survey found support for Barrett’s confirmation jumping from 37 to 48 percent, with much of the movement in her direction coming from Democratic respondents. On October 8, just days before her confirmation hearings began and with a narrow plurality still opposed to her ascension to the high court, a CNN/SSRS poll revealed that Barrett’s favorability ratings were surprisingly high. Other pollsters found something similar; support for or opposition to Barrett’s confirmation had achieved roughly stable parity, but Barrett herself was well-liked.

The knowledge that Barrett was a generally likable figure surely informed Democratic messaging. As confirmation hearings approached, the party’s leading lights made a conspicuous effort to avoid the kinds of personal attacks on her character and background that transformed Brett Kavanaugh’s hearings into a spectacle. Shockingly, the hearings themselves were devoted almost exclusively to the kind of substance relevant to a judgeship.

Voters were treated to deliberations on law and precedent, originalism and how it conflicts with judicial philosophies that consider disparate impact and congressional intent, and her jurisprudential thinking on a host of thorny matters that have and will yet come before the courts.

There was none of the base implication that characterized Barrett’s 2017 confirmation hearings to the 7th Circuit. And when a few Democrats attempted the sort of slander that thrills the activist class on Twitter—for example, voicing the allegations that Barrett was just another tentacle of the vast conspiracy of right-wing podcast advertisers or that she had tacitly revealed her homophobia by using the phrase “sexual preference”—it landed with a laughable thud.

Democrats had effectively ceded the confirmation hearings to Republicans because the terrain they intended to fight over had expanded well beyond the Dirksen Senate Office Building. Democrats argued that what Republicans were doing was “not constitutional,” according to Joe Biden (which is total nonsense). They called the Senate GOP’s constitutional prerogative to confirm presidential nominees “court-packing” (again, more nonsense), and they pledged to retaliate in kind when they had the chance by transforming the impartial judicial branch into a rubber stamp that would exist only to ratify Democratic initiatives.

Rather than fight Barrett directly, Democrats opted for an indirect attack on various tangential targets that are only obviously relevant to this Supreme Court nomination if you’re a plugged-in political junkie. In the process, Democrats lost the plot, as did the voting public. And Democrats sacrificed their initial advantages.

According to the latest New York Times/Sienna survey, the messaging war Democrats waged over the last three weeks has been definitively lost. The survey found that, while only a narrow plurality supports Barrett’s nomination, a near-majority of voters disagree with Democrats who have argued that no one should be confirmed before Election Day. Forty-seven percent back a Senate vote on Barrett “before the election,” while only 39 percent are opposed. As for the dictionary definition of “court-packing,” e.g., the Democratic threat to “increase the size of the Supreme Court to include more than nine justices,” nearly six-in-ten likely voters are opposed—including nearly 30 percent of Democrats and 65 percent of self-described independents.

The Times poll hasn’t crawled out on a limb either. A Gallup survey released on Tuesday found that a majority, 51 percent, believe Barrett should be confirmed even despite record levels of Democratic opposition to her nomination. This follows another Gallup poll, which showed that a plurality of respondents thought the Court was ideologically balanced—not “packed” with conservative ideologues, as some Democrats insisted. And that perception contributed to Gallup’s observation that the Supreme Court is presently seen in a largely favorable light by partisans from both sides of the aisle. Not since 2000 has the Court been less politically polarizing than it is today.

These trends suggest that the Democratic strategy, to the extent there was one, was an abject failure. They failed to transform Barrett into a toxic figure. They failed to show why she should not be confirmed. They failed to convince the public that Republicans played dirty pool by confirming Trump’s nominees to the bench. They failed to persuade voters that their punitive court-packing plan was warranted retaliation. The Democrats didn’t just lose the fight over Barrett’s nomination; they introduced into the national political dialogue a handful of new issues on which they are also losing.

The utter hash Democrats have made of their effort to derail Amy Coney Barrett’s nomination to the Supreme Court is no small feat. It bodes particularly ill for the era of competent progressive politics that the Democratic Party’s ardent fans fully expect to dawn next January. 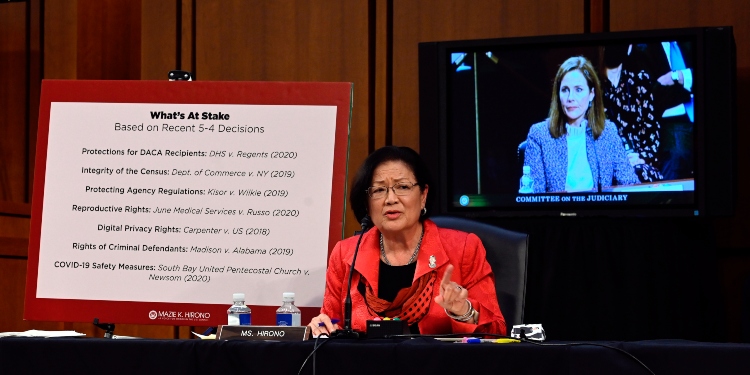