The Democratic National Convention is over, and Democrats did not leave much to voters’ imaginations.

The party faithful were likely enlivened by the speakers who sketched out a transformative vision for the future of the country. Less ideological voters will probably appreciate the not-exactly-subtle efforts to contrast Joe Biden’s character and comportment with Donald Trump’s. The party smartly shaped much of its pitch around the pandemic, which will likely be the election’s most salient issue and one that does not favor the incumbent president.

And yet, there were many glaring thematic omissions throughout this nominating convention. The ones that Republicans are most likely to exploit when the focus turns to the GOP next week are rising crime rates, lawlessness in American cities, and the Democratic Party’s tacit acceptance of those intolerable conditions.

The relevance of crime and violence as an electoral matter is apparent in the polls. A Harvard CAPS/Harris poll from late July found 77 percent of respondents expressing concern over rising crime rates in American cities with a plurality (46 percent) saying they were distressed by incidents of criminality in their own communities. The Pew Research Center found that voters rank “violent crime” as a primary 2020 election issue just below the pandemic, with six-in-ten voters saying the matter is “very important” to their vote.

This isn’t merely a matter of perception. Between May and June, homicides in 20 U.S. cities increased by a staggering 37 percent. Aggravated assaults increased by 35 percent, and robberies are up by 27 percent. These statistics are reinforced by the bloody images of riotous mob violence to which Americans are privy now on an almost daily basis. The rioting that overtook so many major American cities in early June slipped from the headlines and no longer leads the evening news broadcasts, but the violence never ended. The images of marauding hordes vandalizing landmarks, looting storefronts, and assaulting passers-by have been with us all summer, and they’re not going away. These visuals are hard to ignore, and the only people who seem intent on ignoring them are prominent Democratic politicians.

All this has occurred as Democrat-led municipalities across the country have opted to constrain their police forces, dissolve key enforcement units, or divest them of resources. What’s so curious about the Democratic National Convention’s conspicuous silence on this issue, though, is that Joe Biden does not appear to support any of this. He has called for and campaigned on a promise of additional funding for local police forces, not less. Biden’s vice-presidential nominee, Kamala Harris, acquired a reputation as a tough-on-crime prosecutor (to the point of being persecutory). If these were obstacles to appealing to progressive voters during the primary, they are assets in a general election dominated by voters for whom “law and order” aren’t dirty words.

The only explanation for why Democrats have ceded the issue of violent crime to Republicans is that they have no idea how to navigate this moment. The contradictions presented by an activist class demanding less law enforcement while circumstances all around suggest what’s needed is more policing are just too paralyzing. But make no mistake; Republicans will exploit this oversight next week. Indeed, it’s a veritable lifeline for Donald Trump and the GOP. Democrats had better hope that voters are prepared to subordinate concerns over their own physical safety to the issues of public health, economic malaise, and Donald Trump’s defects of character. If they’re not, this lapse will be looked upon as political malpractice of the highest order.

“As president, I will make you a promise,” Joe Biden said while accepting his party’s nomination. “I will defend us from every attack, seen and unseen, always, without exception, every time.” That’s a tall order, but maybe he’ll fulfill this promise in the Oval Office. As a candidate, though, this pledge has already been broken. 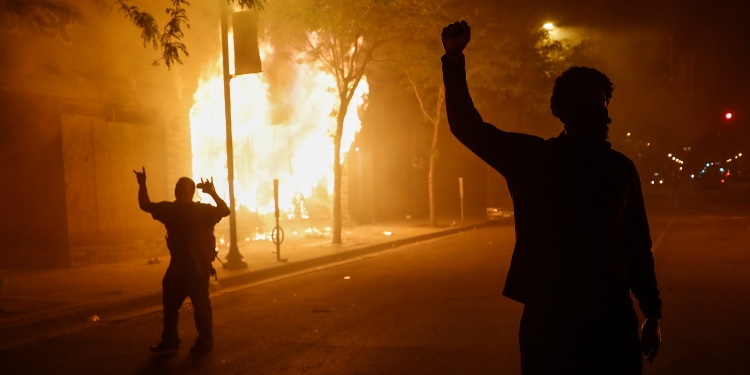