There is something about presidential-election years that drives partisans toward a self-destructive fantasy. In the three years before an election, partisans loyal to the party that lost last time make genuine efforts to understand what went wrong, to reach an understanding with the victors, and to compromise in pursuit of limited and incremental gains. And then, in year four, all that goes out the window. It is replaced with a tantalizing but illusory temptation: Why expend any effort seeking a covenant with the other guys when they can just be destroyed?

This fantasy is apparent in a debate raging within the very narrow band of the American political spectrum in which Trump-skeptical conservatives reside. Can the Trumpified GOP be reformed, or should it be razed to the ground? It is an entertaining but, ultimately, irrelevant deliberation. At the risk of spoiling the fun, neither party will be destroyed by this election. If history is any guide, one party will encounter a setback from which it will recover in relatively short order. The only outstanding question is the form the chastened party will take.

It is a source of wonder to watch as the pro-Trump faction of the right hands their 2016 mantra “burn it all down” over to the right’s committed anti-Trump partisans. Though it is undoubtedly a trite and emotional demand, this visceral rallying cry masks some serious concerns about the longevity and moral propriety of the GOP as it is constituted.

In 2016, those who sought to “burn it all down” were happy to trade the GOP’s electoral viability for a party that was more ideologically consistent. For them, a Republican Party that campaigned on liberty, job security, and humility abroad but leaned into military adventurism, trade liberalism, and economic dependence in power wasn’t worth saving. These are valid concerns.

Likewise, those who believe that the GOP is indelibly tainted today are not without their own salient arguments. Most notable among them, their belief that a Republican Party is no longer a governing enterprise. It exists only to promote the president and his cantankerous pretensions. That is a sweeping claim, but it isn’t entirely unsupported. Just look to Congressman Matt Gaetz.

Rep. Gaetz is a showman. He is a fixture on cable news, where he is always good for a sound bite or two. He shows up in Congress wearing a gas mask to protest facial covering requirements necessitated by the ongoing pandemic. He disrupts hearings—even those in secure meeting rooms—for the benefit of the cameras. When asked by Buzzfeed in 2018 whether he was worried that his theatrics might be “gaining notoriety rather than star power,” Gaetz replied, “What’s the difference?” The congressman was so proud of this response that he posted the article to his official House.gov website.

Gaetz’s ability to behave in ways that are guaranteed to irritate his opponents was on display again this week. On Monday, the congressman joined former Trump adviser (and recent beneficiary of a presidential commutation) Roger Stone to endorse the activist Laura Loomer’s bid for a seat in the House of Representatives.

The decision to look past six more viable Republican candidates seeking to face Rep. Lois Frankel—a Democrat who ran unopposed in 2018 in her Democrat-leaning South Florida district—makes little political sense. What’s more, Loomer’s history of graceless agitation, reckless activism, and flagrant racial antagonism should render her a toxic entity. This is sound politics only if politics is defined as a daily effort to “own the libs.” But even that’s unsatisfying. Loomer doesn’t own anyone but herself.

Loomer rose to prominence after she rushed the Shakespeare in the Park stage in New York City’s Central Park during a production of “Julius Caesar,” a production in which the eponymous antagonist bore a deliberate resemblance to Donald Trump, demanding that we “stop the normalization of political violence against the right!” Shortly thereafter, she became a correspondent for the conspiracy theory website InfoWars, and she quickly settled into the role. In that role, Loomer accused the survivors of the Parkland school shooting who spoke out in favor of more restrictive gun laws of being puppets for special interests.

Loomer was banned from addressing the Conservative Political Action Conference (CPAC) in 2019, but only after she was banished from social-media platforms like Twitter and Facebook. Her exile from Twitter was the result of her repeated attacks on Rep. Ilhan Omar—a subject of much deserved criticism. But Loomer focused exclusively on denouncing Omar’s religious affiliation, violating the website’s terms of service. To protest her persecution, Loomer handcuffed herself to the front door of Twitter’s New York headquarters while wearing a yellow Star of David adorned with the phrase, “Jude” in German Fraktur.

Indeed, Loomer has a conspicuous habit of attacking Muslims in the crassest of terms. “Muslims are out in full force at the scene of the NYC #ISIS attack today rubbing it in everyone’s face. Aimlessly walking around in hijabs,” she wrote after an ISIS-linked attacker struck and killed eight New Yorkers with a car. “There’s no such thing as a moderate Muslim,” she added. “They’re ALL the same.” In a clarifying statement to the Forward, Loomer explained, “I don’t like Islam, they don’t have to like the Jews.”

There can be no doubt that Loomer’s value, and what attracted her to Gaetz, is her willingness to provoke and aggravate. That is currency in the Trump era, and it’s been a source of frustration for more establishmentarian Republicans for some time. A generational divide has formed on the right, with a younger set of activists abandoning inspiration and convincing argumentation in favor of provocation for its own sake. Much depends on the president’s electoral fortunes but, if there is a post-Trump moment for the GOP, the reckoning will be over Trump’s prickly affectation and those who aspire to emulate it. It will not be over policy—even in the age of Trump, the GOP campaigned on populist poetry and governed in technocratic prose—it will be over style.

We know on which side of that debate Matt Gaetz will fall. It remains to be seen whether his party will fall with him. 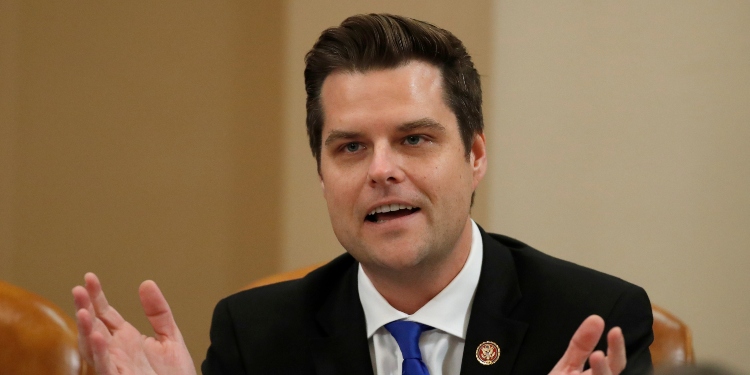