Wednesday night’s vice-presidential debate was a window to a time before Donald Trump. It was a display of what we used to call “politics,” an artful dance in which both candidates displayed an unrivaled capacity for evasion and duplicity while preserving a patina of decorum. For some, however, this dynamic made for an unsatisfying experience.

Council on Foreign Relations President Richard Haas wrote that the Commission on Presidential Debates “is unable to set conditions that make for a serious debate.” He recommended that moderators “follow up on non-answers.” But a non-answer is an answer. Dodges and equivocations can tell you a lot about a campaign’s strategy, what it perceives as its strengths and weaknesses, and what the candidates think the polls are showing. In that sense, both Mike Pence and Kamala Harris showed their hands.

For example, Mike Pence did not want to talk about climate change. What he did want to talk about, and what his opponent hoped to avoid, was the Green New Deal and fracking. The administration has a record worth touting when it comes to overall emissions reductions, which is attributable to private-sector innovation and the ubiquity of domestically produced natural gas. The deftness of this strategy is evident not just in polls that suggest the Green New Deal is a political liability for Democrats but in Harris’s efforts to defuse the charge that her campaign supports a bill she co-sponsored in the Senate, endorsed in the primary, and (according to their campaign’s website) serves as the “framework” for Joe Biden’s climate plan.

Mike Pence didn’t want to talk about preexisting conditions. At least, he didn’t want to talk about the Trump campaign’s plan for preserving Obamacare’s coverage requirements if the administration’s latest legal challenge to the Affordable Care Act succeeds. “I hope we have a chance to talk about healthcare,” Pence said during his opportunity to talk about healthcare (an opportunity he used to emphasize his objections to the Green New Deal). Instead, he pivoted to the “taxpayer funding of abortion” and the need to confirm Supreme Court nominee Amy Coney Barrett. That’s a tortured interpretation of what constitutes the topic of healthcare, but it reflects the GOP’s advantages. The former has never been popular, and the latter is increasingly acceptable to the voting public.

Mike Pence really didn’t want to talk about Donald Trump’s repeated refusal to entertain without qualification the prospect of a peaceful transfer of power if he loses in November. The terrain to which he retreated—the FBI’s deeply flawed investigation of the president’s 2016 campaign, which served as the predicate on which Trump was eventually impeached—was striking if only because you haven’t heard a Democrat say the word “impeachment” since February. If Trump’s indictment was a net advantage for Democrats, Republicans wouldn’t be the only people discussing it.

Though numerous, Pence’s prevarications were easily eclipsed by Kamala Harris’s tendency to answer questions she was never asked.

Harris assured Americans that she was eager to discuss Joe Biden’s plan for containing the coronavirus outbreak. Pence insisted that the Biden plan, which involves “advancing testing, creating new PPE, developing a vaccine,” is exactly what the Trump White House has pursued. That oversimplification, Harris bristled, needed to be cleared up. But when given the chance, Harris merely reiterated the case she had already made against Trump’s handling of the crisis. Given how difficult it is to find a poll that doesn’t show the president less than 20-points underwater when it comes to his management of this pandemic, that evasiveness is savvy.

Harris also assured the country that she would, at long last, be truly forthright about where she stands on court-packing. “Let’s talk about packing the court then,” Harris said after Pence repeatedly accused her of failing to make her position clear. But she did not make her position clear. Instead, she appeared to contend that filling existing vacancies on the federal bench with “purely ideological” judges constitutes court-packing (it doesn’t). For good measure, Harris noted that Trump had not nominated any black judges to appellate courts. These non-sequiturs lay bare an inconvenient fact for the aggrieved progressive wing of the Democratic Party: Court-packing is unpopular.

But the ground to which Harris retreated most often, which highlights what may be her party’s insurmountable advantage in this campaign, was Joe Biden himself.

Harris would not be drawn into an argument with Pence over Barack Obama’s record on terrorism and national security. She would not allow herself to be instigated by the charge that human-rights activist Kayla Mueller, who was murdered by ISIS, would be alive today if Trump had been president in 2015. She wouldn’t even defend her own record as a politician and a prosecutor. What she would talk about was “Joe”—his upbringing, his record, his views, his folksy but ridiculously simplistic narratives (No, the conduct of foreign policy is not just about “relationships”). Biden is by no means beloved, but his favorability ratings are the envy of Donald Trump.

What was not said during last night’s debate was as enlightening as what was. And judging from these candidates’ prevarications, we can surmise that the Trump campaign enjoys some advantages over Joe Biden on issues. But the Biden campaign’s chief advantage is the acceptability of their candidate. And that might be all that matters in the end. 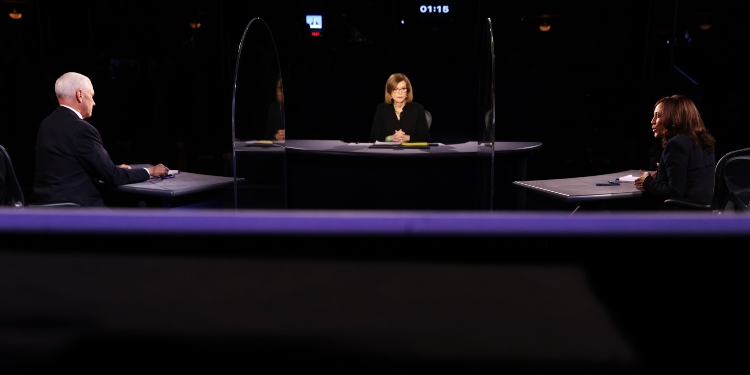