On Wednesday morning, American officials indicated that they believe Russia will launch a full-scale invasion of Ukraine within the next 48 hours. Given the impressive accuracy of the intelligence that Western governments declassified in the run-up to Moscow’s recognition of the so-called “breakaway” republics in Ukraine and Russia’s subsequent incursion into Ukrainian territory, it’s a warning we should take quite seriously. The repercussions of such a seismic event for the European security architecture and the American-led post-Cold War order could be immense.

But not everyone is bothered or even displeased by this growing threat to Western primacy in Europe. Some well-known voices have questioned the legitimacy of the Atlantic Alliance’s efforts to make Russia suffer consequences for its revanchist attack on its neighbor. These voices, the loudest of whom are on the political right, have assumed a posture that blows right past non-interventionism or even pacifism. They’ve increasingly settled on the notion that Moscow has been provoked and its actions are justified. At the very least, the Americans who oppose Putin’s advances on neighboring European territory are somehow acting in bad faith. The sophistry in which they are engaged, however, seems tailored to appeal only to the narrowest sliver of the American political spectrum.

“It might be worth asking ourselves, since it is getting serious, what is this really about? Why do I hate Putin so much?” Fox News Channel host Tucker Carlson recently pondered. “Has Putin ever called me a racist? Has he threatened to get me fired for disagreeing with him? Has he shipped every middle-class job in my town to Russia?” he continued. “Is he teaching my children to embrace racial discrimination? Is he making fentanyl? Is he trying to snuff out Christianity? Does he eat dogs?”

The non-sequitur aside (we do not know for a fact that Putin doesn’t eat dogs), the thrust of Carlson’s argument is clear: Americans should concern themselves more with their domestic political opponents and cultural conflict than with the threat posed by hostile actors abroad who aim to harm American strategic interests. That’s extraordinarily parochial and short-sighted, but it’s a point of view worthy of at least a barstool.

It’s not at all obvious, however, who the audience for this sort of thing is. It’s certainly not the rank-and-file Republican voter, who you would think would make up the core of this program’s viewership.

A CBS News/YouGov survey conducted in early February—when a potential Russian invasion of Ukraine was merely hypothetical—found that, among Republicans, most (55 percent) wanted to see the U.S. “stay out” of “negotiations around Ukraine and Russia.” That quasi-isolationist view, however, does not extend to support for Putin’s position. Among self-described GOP voters, 41 percent backed Ukraine in the current conflict while just 9 percent supported Russia. Moreover, fully 59 percent of Republicans and nearly two-thirds of Trump voters said Joe Biden was being “too friendly” toward Moscow.

This finding is consistent with the polling of Republicans over the course of the Biden presidency. “Do you think Russia poses a military threat to the United States, or not?” Quinnipiac University pollsters asked in a poll from last week. Sixty-three percent of Republicans said yes—roughly on par with the 60 percent of Democrats and 64 percent of independents who said the same.

A Pew Research Center survey published in late January found that a majority of Republicans see Russia’s military buildup as either a “minor” or “major threat” to U.S. interests. Thirty-nine percent of Republicans called Putin an “enemy” of the U.S. while another 50 percent describe the Russian autocrat as a “competitor.”

This dovetails with another CBS/YouGov survey from June 2021 showing that 62 percent of Republicans see Putin as either “unfriendly” or “an enemy.” Fifty-nine percent of those Republicans described Joe Biden as “too friendly” toward Moscow, while a whopping two-thirds of GOP voters say the president “should take a tough stand” against the Kremlin.

Republican voters have been consistent when it comes to Russia. So why is the conservative commentariat twisting  into knots to ingratiate themselves with such a small percentage of the Republican voting base? If you’re taking your cues from the far-too-online right, you might be convinced that the average GOP voter is invested in Putin’s adventurism.

The Conservative Political Action Conference feeds into that sentiment when it books someone like former Congresswoman Tulsi Gabbard to address the confab’s attendees. The organization that hosts this conference gave the progressive lawmaker a lifetime conservative voting record of just 7.6 out of 100 points, so her conservatism is not the draw. Her primary credentials seem to be her willingness to shill for the Kremlin; a directive that led the former lawmaker to leap to Bashar al-Assad’s defense when he was engaged in war crimes and to disparage Ukraine’s Volodymyr Zelensky as a burgeoning autocrat.

Likewise, if you’re basing your opinions on the pronouncements of influential figures like Turning Point USA’s executive director, Charlie Kirk, you might believe, as he does, that it “feels as if Putin is going into places that want him.” After all, the conflict over Ukraine “is a family dispute that we shouldn’t get in the midst of, that’s for certain.” That’s an opinion that cannot survive first contact with a real, live Ukrainian—or, for that matter, a Russian. “Even as Russians tend to say Russians and Ukrainians are one people, a majority of Russians (54%) say they should be two countries,” read the findings of a recent CNN-sponsored poll. “Ukrainians overwhelmingly feel Russia and Ukraine should be two separate countries, with 85% saying so.” Even a cursory review of Putin’s de facto declaration of war against Ukraine suggests this is not an opinion the Kremlin shares.

A recent statement produced by Ohio-based U.S. Senate candidate J.D. Vance is illustrative of the nationalist right’s conundrum. He wrote derisively of the “obsession with Ukraine from our idiot leaders,” which “serves no function except to distract us from our actual problems.” The impetus for this statement was the fact that two of Vance’s competitors for the GOP nomination, Jane Timken and Mike Gibbons, both expressed support for Ukraine’s right to sovereignty and self-defense. If Vance’s moribund polling is any indication, it’s Vance who has misread the moment. Even Vance’s chief competitor in the populist lane, former state treasurer Josh Mandel, has advocated policies expressly designed to deter Russian aggression while casting the current crisis as a product of “weakness out of the Biden White House.”

Either those on the nationalist right know something about the Republican mind that polls cannot capture, or they are talking only to a small clique that is utterly unrepresentative of the American right. Most objective metrics suggest it’s the latter. 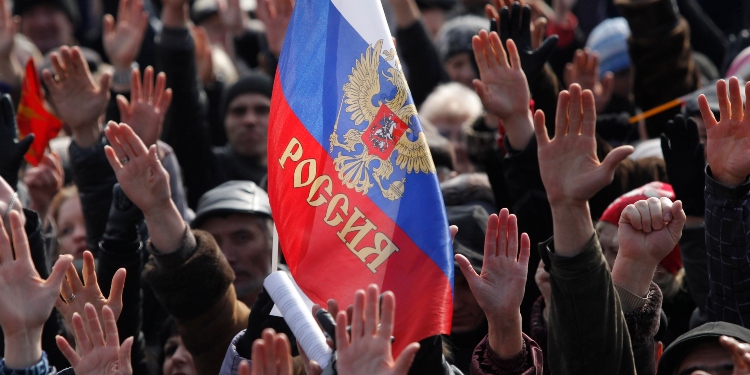