By the close of the business day on Friday, the political story on the nation’s front burner was a surprising decline in African-American turnout. According to early vote totals in some key swing states, Hillary Clinton was going to fail to reassemble a core element of Barack Obama’s winning coalition of voters. With Donald Trump’s enthusiasm surging and Republicans finally “coming home” behind their unconventional nominee, Clinton’s allies were sounding the alarms. Then, on Friday night, a funny thing happened. The sleeping giant that is the nation’s registered but often-unenthusiastic Latino vote awoke.

An unexpected surge in the Latino vote was most vividly illustrated in Nevada’s Clark County. By 8 p.m. on Friday, over 50,000 people had voted. With in-person polling places mobbed, the state extended voting hours to 10 p.m. The scenes at a polling place in a Las Vegas Cardenas Market were especially remarkable. By the end of the night, over 57,000 people had voted. These were not Republicans. On Friday alone, nearly 30,000 Democrats had cast early ballots in Clark County compared to just over 15,400 Republicans.

The news for the GOP wasn’t any better in Florida. From the Republican perspective, polls of the Sunshine State’s Latino voters were already dismal. A bipartisan survey conducted for Univision found Trump trailing Clinton by a dramatic 30-point margin. Even among historically GOP-voting Cuban-Americans, Trump enjoyed only the support of a modest plurality.

When the early votes started rolling in, the participation among Florida’s Hispanic voters shocked those who had modeled the state’s electorate. On Thursday alone, wrote Florida-based political strategist Steve Schale, “82.5 percent of Hispanic early voters were considered low propensity voters.” At least 200,000 more Hispanics had voted on Friday than at the same point four years prior. “Florida electorate poised to be more diverse than our poll, or most of our September panelists,” observed the New York Times’ Nate Cohn, who helped conduct a Times/Siena College survey of the state. As of Sunday, 32 percent of Hispanic early voters had not voted at all in 2012.

That is, in short, the sum of all Republican fears. The GOP had long known that the nation’s Hispanic voters did not participate in elections at rates commensurate with their registration levels, but it would be a nightmare for the Republican Party if they ever did. In 2012, Latino participation declined despite Democratic efforts to transform Mitt “self-deportation” Romney into a monster. All it took to turn this potential political force into a kinetic one was a Republican presidential nominee who equated Mexican migrants with rapists, insisted a judge of Mexican-heritage could not be objective, and made radical mass deportations the centerpiece of his campaign for the presidency. Who could have guessed it?

This was always the flaw in the theory that Republican could win a presidential popular vote by doubling down on their party’s appeal to white voters. Donald Trump ran a campaign of irredentist populism. He promised to turn the clock back on the industrial age and inflamed demographic anxieties among whites in formerly tight-knit, monochromatic communities. The result of this approach has been a surge in enthusiasm for Trump among non-college educated whites. It also appears to have had an equal and opposite reaction in the form of an enlivened base of previously apathetic Hispanic voters.

The true fear for Republicans is that 2016 becomes a realignment election for these Hispanic voters in a way that 1964 was for African-Americans. The black vote, once a solidly Republican constituency, had been drifting toward Democrats for decades preceding the 1964 election. It was, however, black voters’ antipathy toward Barry Goldwater that made that year at a turning point. A generation of Latinos, too, could look back on 2016 as the moment in which their political orientation was cast in cement.

When asked in October if a surging Hispanic vote may be enough to push Clinton across the finish line before Trump, former Arizona Governor Jan Brewer snidely dismissed the possibility. “Nah,” she insisted. “They don’t get out and vote. They don’t vote.” Brewer was whistling past the Republicans’ graveyard. The Latino apocalypse the GOP had known was coming for over a decade could be upon them. If so, it may take a generation before the Republican Party can recover. 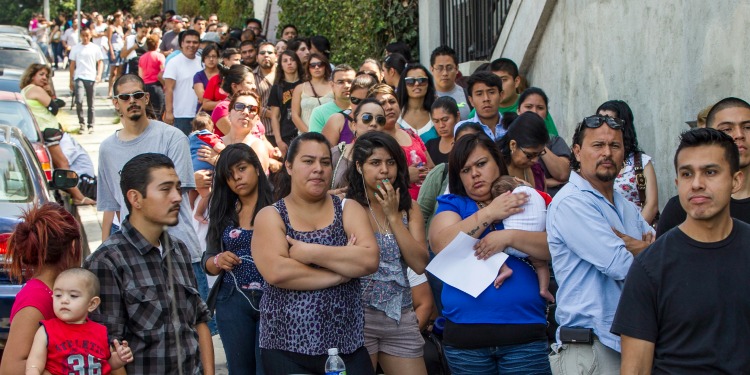