“Donald Trump is a businessman”—that is what more than a few of the Republican National Convention’s featured speakers reminded us, often only to explain why his conduct departs from the comportment expected of a president. And it is true that the president is a self-styled practitioner of the art of salesmanship, which is perhaps why so much of the GOP’s nominating convention sacrificed consistency in favor of telling you whatever they thought you wanted to hear.

Throughout the RNC, conservative philosophy and the president’s actual record proved no obstacle to the development of an advantageous narrative. If there was a guiding principle on display, it was to make the sale. Whatever that takes. Even if what it takes is insultingly contradictory.

For example, maybe they could interest you in the fact that Donald Trump shut down the American economy over the COVID-19 pandemic? “I watched him take the strongest, most inclusive economy in a lifetime, the lowest unemployment in a half century and the highest wage increase for working families in decades, and close it down to save American lives,” Ivanka Trump insisted. If you don’t remember Trump’s anguished decision to lock down the country to arrest the spread of coronavirus, it’s only because that never happened.

Not only does the president lack the authority to “close” American commercial and social life, Trump vehemently resisted the kind of stringent lockdowns that were imposed on much of the country over the spring and early summer. The president and his administration have, in fact, been highly critical of those policies, and have pledged to resist their re-imposition in the event of a “second wave” in the fall. Moreover, if lockdowns are a valuable response to the pandemic, you wouldn’t know that from the number of RNC speakers warning you that Democrats would “lock you in your home” until “you become dependent on the government.”

Okay, if that doesn’t work for you, perhaps they can turn you onto the idea that Trump is the first president in a generation to avoid prosecuting any new foreign wars? Several Republican speakers reminded us of this accomplishment. While it depends on how you define both “new” and “wars,” this assertion is at least defensible. And yet some of the president’s adulators were also quick to tout the president’s aggressive efforts to deter Iran.

While the RNC lineup chose to frame the strike that neutralized Iranian Revolutionary Guards Corps Commander Qasem Soleimani as a counterterrorism operation (indeed, that was its most salient legal justification), the operation was the culmination of a series of kinetic actions the president began taking against the Islamic Republic shortly after the president took office.

In 2017, the United States executed strikes on Iran’s ally, Syria’s Bashar al-Assad, in retaliation for his repeated use of chemical weapons against civilian populations. That same year, U.S. forces adopted a more hostile posture toward Iran-backed militias inside Syria. “It didn’t start off about Iran,” one coalition military official confessed, “but it’s becoming that way.” By 2018, Iran-backed proxy forces began ramping up operations targeting Americans and their allies in the region. And the following year, Iranian-backed militias and regular forces mounted a multidirectional assault on Western interests. Commercial vessels were boarded and seized. A U.S. drone was shot down over international waters. A Saudi petroleum processing facility was incapacitated by an Iranian drone strike. And Americans in Iraq were killed and wounded by Iran-backed proxies. The operation that killed Soleimani was, in fact, the only one of a series of retaliatory strikes that targeted Iranian targets in the region.

The president might have only reluctantly responded to Iran’s provocations, but respond he did. And the president’s backers are proud of that record. But so, too, are they swollen with satisfaction over the president’s pacifism. Trump can be both dove and hawk in the same hour—in the same speech!—if that is what it takes to get you on his side.

If none of this is grabbing you by the lapels, maybe you’re less interested in Trump and more concerned about Joe Biden. Well, try this one on for size:

Biden, we are told, is an enthusiastic warden of the American jail system. “Biden led the charge on a crime bill that put millions of Black Americans behind bars,” said Sen. Tim Scott of the 1994 crime bill. This supposedly offers a contrast favorable for Trump, who signed a GOP-backed criminal justice reform bill into law in 2018.

But that contrast conflicts with the president’s desire to present himself as a champion of law and order—at least, when compared with the permissiveness of modern Democrats. So, as Republicans like Vice President Mike Pence and Eric Trump averred, Biden is also a blinkered ideologue who would, if he got the chance, “defund and disrespect our law enforcement.”

All this incoherence is irritating, but it may not be tactically inept. Two contradictory political principles can and often do reside comfortably within the same head. The GOP’s embrace of strategic incoherence is just the latest twist in the 2020 campaign. 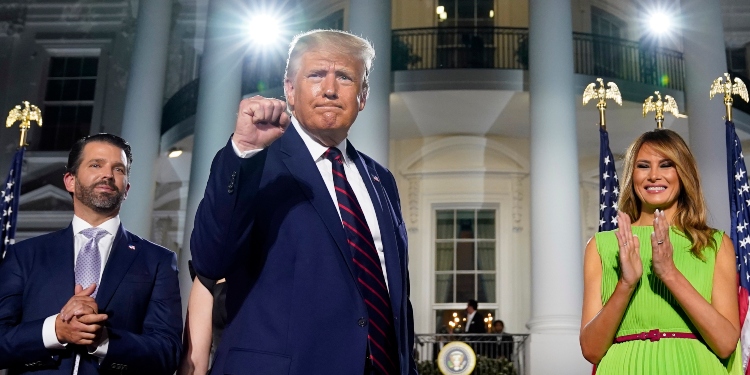