“Look, there’s so much of this virus that we think we understand, that we think we can predict, that’s just a little beyond our explanation,” Joe Biden’s COVID-response adviser Andy Slavitt recently confessed. “This is a virus that continues to surprise us.”

That’s some welcome contrition from Slavitt, but it’s also belated to the point of uselessness. The president’s COVID counselor spent the better part of the last year insisting from a position of authority that the virus was, in fact, behaving in fairly predictable ways. And he had implied that the nation’s Republican governors, by and large, were ignoring those patterns while their Democratic counterparts prudently deferred to empiricism.

The tables have since turned in some fairly remarkable ways. Slavitt was among the many highly visible critics of Republican pandemic policy to repeat the claim that “Florida Gov. DeSantis misled the public on COVID crisis” by concealing relevant data and spreading misinformation. That charge against DeSantis was never as substantiated as as is the present case against a figure he portrayed as a hero of the pandemic, New York Gov. Andrew Cuomo. The idea that “Cuomo killed people in nursing homes” through the pursuit of careless policies was, in Slavitt’s estimation, a ghoulish “right-wing meme.” Now, it’s the allegation of the state’s attorney general.

New York Attorney General Letitia James’s January report alleging that Albany’s “guidance requiring the admission of COVID-19 patients into nursing homes” that put long-term care facility residents “at increased risk of harm” was not a shock to anyone who had followed the governor’s conduct closely. In the weeks since, the FBI and the U.S. attorney in Brooklyn have begun doing some probing of their own into Cuomo—specifically, the allegation that his administration hid the data relating to nursing-home deaths out of fear of political or even legal consequences relating from his conduct.

The bottom seems to have fallen out among Cuomo’s defenders in New York politics. The press is replete with stories about how Cuomo’s thuggish personal conduct—which is also not news to anyone who did not commit themselves to myth-making—has become intolerable. An effort is now underway in the legislative chambers that Democrats control to strip the governor of the emergency powers granted to him during the pandemic.

This is quite a fall for a figure the press lauded as prescient about the impact of the coronavirus outbreak and heroic in his response to it. The “Love Gov,” as he was nauseatingly deemed, was the subject of hagiographical portraiture even when it was obvious that his policies would produce avoidable deaths. Cuomo graced the cover of Rolling Stone magazine. He was hailed in the media as “America’s governor.” His daily briefings, which the New York Times praised as “articulate, consistent and often tinged with empathy,” earned the governor an Emmy Award.

If Cuomo’s star has fallen with unexpectedly precipitous speed given the treatment he received only months ago, his fortunes haven’t declined with nearly the speed of another COVID hero: California’s Gov. Gavin Newsom.

To the extent that Andrew Cuomo’s approach to pandemic management in early 2020 merited any skepticism, Slavitt claimed that it was only because New York lagged California by six days before imposing the draconian restrictions on public movement that persist to some degree even today. Slavitt’s assessment was echoed in a ProPublica investigation, and the results seemed to speak for themselves. “As of May 15, there were nearly 350,000 COVID-19 cases in New York and more than 27,500 deaths, nearly a third of the nation’s total,” a May 2020 investigation read. “The corresponding numbers in California: just under 75,000 cases and slightly more than 3,000 deaths.”

Newsom leaned into his anointed status as a hero of the pandemic. He routinely referred to California as a “nation-state.” “We need to coordinate and organize our nation-state status,” Newsome averred, to harness the power of “the state of California as a nation-state.” The cumulative effect of his rhetoric was to present himself as a shadow president in contrast with the occupant of the Oval Office—a status social media reinforced by deeming him “#PresidentNewsom.”

The Los Angeles Times editorial board professed its gratitude that providence had delivered Newsom unto them at this auspicious moment in the state’s history. Elsewhere in its pages, author and columnist Virginia Heffernan delivered one of the pandemic’s more obsequious displays of devotion to both governors for just not being Trump. With an appreciation of “unminced words” and “hard truths,” “Americans can turn to their governors — with Cuomo and Newsom in the lead — to speak the truth, mandate the shutdowns, contradict what passes for pandemic policy under Trump.”

But in the months that followed, California’s pandemic didn’t follow a predictable trajectory. The state lurched from lockdown to reopening and back to lockdown. The state began to hemorrhage residents, then critical industries began to follow their leads into states with friendlier business climates and less onerous restrictions on social and economic life. Suddenly, a once quixotic GOP effort to recall the governor began gaining signatures and public support. The governor’s job-approval ratings have steadily declined and are now underwater, and California’s Democrats are “suddenly waking up to a nightmarish reality” that Newsom’s governorship could very well be cut short.

It should be apparent to all who are capable of dispassionate self-examination that the cults of personality that sprang up around both Cuomo and Newsom were pale reflections of the cult of personality around Donald Trump. And to the extent that these crazes served any purpose, it was to paper over our leaders’ manifest personality flaws, the incompetence of their governing styles, and the discomfiting fact that no one had their hands around the pandemic. In the end, the rise and fall of these tragic protagonists says more about us than them, and what it says is humiliating. 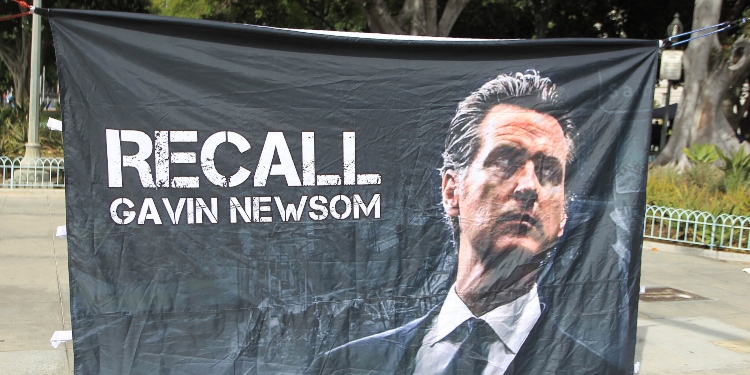