Four months ago, Florida Gov. Ron DeSantis committed a prosecutable offense. At least, that’s what his more hysterical critics snarled as they processed their inchoate frustration with the governor’s shuttling of displaced migrants to the rarified atmosphere of Martha’s Vineyard. His alleged crime pales in comparison to Texas Gov. Greg Abbott’s, who sent thousands of migrants north from the border towns where they congregate to cities in the Northeast and Midwest. The humanitarian crisis these governors disaggregated exposed them to ill-defined legal consequences, their critics insisted. Well, these Republicans are in good company. Colorado’s Democratic Gov. Jarred Polis may soon join them both in the dock.

“We were notified yesterday that the governor of Colorado is now stating that they are going to be sending migrants to places like New York and Chicago,” New York City Mayor Eric Adams told reporters on Tuesday, making a splash Polis might have hoped to avoid. “This is just unfair for local governments to have to take on this national obligation,” Adams complained, adding that he was only informed of that this effort was underway the night before.

When contacted by Politico, Polis’s administration defended itself. Denver is only assisting asylum seekers in their efforts to reach their final destinations inside the United States, and they’ve been doing so for weeks. It’s a logical and justified response to an influx of migrants, which has overwhelmed public services and forced Colorado’s capital city to declare a state of emergency. Moreover, the program is fully financed by legitimately allocated funds, and professionals are overseeing the needs of the migrants themselves. Polis insisted that it’s “terrible” that “people are being used as political props” by some unnamed scoundrels. By contrast, he insisted, “what we are doing here is just honoring our values by treating people with dignity and respect.”

How Polis’s migrant distribution program differs appreciably from those authored by Abbott and DeSantis is, however, a mystery.

Pundits, prognosticators, and even politicians like California’s Gavin Newsom—who, it must be said, has developed an unhealthy obsession with the social contract in both Florida and Texas—speculated that the Republican-led migrant distribution programs constituted human trafficking (“literally,” in Hillary Clinton’s estimation). To be specific, “kidnapping or potential Racketeer Influenced and Corrupt Organization (RICO) charges,” according to Newsom’s office.

This risible allegation overlooks the unlawful coercion or incarceration necessary to establish a prosecutable offense, which is surely a deliberate oversight. The notion that Abbott’s and DeSantis’s actions constitute racketeering suggests the mass indictment of much of their respective state governments is forthcoming, though you’d have a hard time proving to a grand jury that the Texas Division of Emergency Management is the functional equivalent of a caporegime. Finally, the notion that taxpayer funds are dedicated to providing willful migrants with expense-free trips to their destination of choice in the American interior is betrayed by the fact that both states specifically appropriated funding for these activities.

The most you can say in defense of those who have condemned these programs is that they’re right to call this a “stunt.” That’s exactly what it is, and it’s mighty effective. With this relatively cheap gesture, something the beneficiaries of which seem to be overwhelmingly grateful, critics of Joe Biden’s border politics convinced the Democratic mayors of some of America’s largest cities to make their arguments for them. Verbatim.

As an iconoclastic Democratic governor who isn’t afraid to buck his party’s consensus, Polis is getting ahead of a trend. His participation in this exercise illustrates not only the efficacy of the busing program as political theater but also the degree to which the border is becoming a political liability for national Democrats. In committing to finally see the border for himself nearly two years into his presidential tenure, Joe Biden ratified Polis’s political instincts.

The states are America’s laboratories. Florida and Texas experimented, and it was a success. The success is being replicated. It took a flashy spectacle to do it, but without abusing taxpayers’ trust, violating any statute, or inflicting any undue hardship on migrants themselves, Abbott and DeSantis innovated a clever and effective way to draw Democrats’ attention to the border. Polis has now ratified the wisdom of their experiment. All that’s left is for these Republicans’ overwrought critics to apply the criminal standard to Colorado’s outlaw regime. Don’t hold your breath. 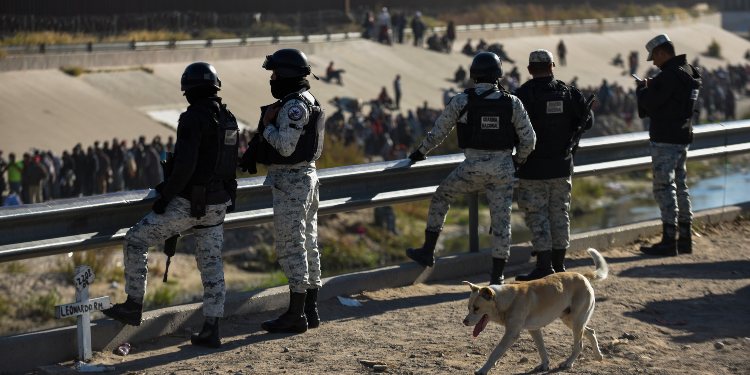