This weekend, a cluster of throwback white supremacists got at least something they were looking for: publicity. As for the rest of their demands, the assembly of malcontents calling itself the “alt-right” has been far less successful. The apparent impotence of this band of resurgent racists appears to elude some observers.

“You will not replace us. You will not destroy us,” shouted the assemblage of white nationalists who gathered in Virginia to protest the planned removal of a statue of Confederate General Robert E. Lee. Clad in matching pleated khakis, adorned with identical haircuts, and wielding lit torches, their effort to invoke Nazi imagery lacked a certain subtlety. Despite the fact that this protest lasted all of ten minutes, a thousand headlines bloomed. It could only have been the group’s efforts to mimic the threatening imagery of early 20th-century fascist movements that resulted in its publicity. It certainly isn’t a measure of the alt-right’s efficacy.

The alt-rightniks are part of a broader group that has been expressing a sense of betrayal with Donald Trump almost as soon as he won the presidency. They were demoralized when Trump renounced them in late December. They were embittered by his conservative Cabinet choices and his admission that Russia was behind attacks on America’s electoral integrity. They resented Trump for dismissing Mike Flynn, for embracing Paul Ryan’s agenda in Congress, and for giving up on funding for The Wall. They were positively apoplectic when Trump ordered strikes on Syrian targets following the gassing of civilians. “Did we win anything?” lamented Trump-backing author Ann Coulter. “I think all of the Trump true believers are petrified.”

Trump knew what he was doing in 2016 by coyly refusing to distance himself from the KKK and courting the alt-right’s most virulent elements. What those to whom Trump was ingratiating himself failed to account for was the country’s institutional predisposition toward anti-racism.

The antediluvian George Wallace impersonators were protesting a vote of the Charlottesville city council. In defiance of a blue-ribbon commission recommendation to keep this and other Confederate monuments in place, the council voted in February to remove the statue and rename the park in which it was situated. The vote was taken “in front of a massive crowd that spilled into the hallways and an overflow room and after the vote, the room mostly erupted in cheers.” A pending court case challenges the city’s right to relocate the monument, but this dubious objection faces a review in an increasingly left-leaning state’s circuit courts.

It is unlikely that statue will survive the currently unfolding shift in national consciousness. This month, two Reconstruction-era monuments to Confederate leaders were banished from New Orleans. The city plans to remove two more in coming days. The decision to topple these and other symbols of rebellion against the Union and of the slavery that insurrection was meant to preserve follow the gruesome 2015 murder of nine members of an African-American church in South Carolina. The gunman’s professed affinity for defunct racist regimes, ranging from the C.S.A. to Apartheid South Africa and the Republic of Rhodesia, prompted a national act of catharsis. Americans sought restitution for this crime by lashing out at the symbols the murderer venerated.

At South Carolina’s capital, the rebel battle flag was furled forever. Other cities and municipalities followed suit, including the former rebel capital of Montgomery, Alabama. Cities and states all over the Union began removing their Confederate monuments. Despite voting to retain their state flag, which contains a representation of the Confederate battle banner, Mississippi’s cities and universities are increasingly refusing to fly it. The drive to demonstrate fealty with the cause of anti-Confederate sentiment became so intense that even the professional golfer Bubba Watson said he would paint over the rebel flag that adorns the roof of the famous Dodge Charger from the television program The Dukes of Hazard.

With rare exceptions, the power structures in the United States are almost entirely aligned against the misanthropes who gathered by the light of their citronella tiki-torches to rage against modernity. They bitterly resent the increasing irrelevance of white nationalism in America and the demise of the kind of overt institutional racism from which they believe they might have benefited. The country has largely moved on, but they refuse to accept it.

So, too, do their opponents, who insist that racism in American legal and governmental institutions not only persists but is prevalent. Cosmetic measures like furling offensive flags and burying monuments to Confederate soldiers, some of whom would recoil at their own likenesses, hardly amount to retribution for the historic crimes of slavery and racism. America may never fully account for and eliminate the institutional racial discrimination of which it was once guilty. To contend, however, that there has been no progress is a sentiment at war with its surroundings.

The nagging fact remains that evidence of systemic racial repression in America endures. When, as the Department of Justice reported, the black residents of Ferguson, Missouri are targeted for excessive policing compared to their white counterparts, the problem persists. When America’s chief law enforcement official plans to reinstate mandatory minimum sentences for low-level non-violent drug offenders, which are so often found to disproportionately target minorities, the problem persists.

The nation is not perfect, and it never will be. It is, however, a more enlightened place than the alt-right thought in the wake of the Trump election. America’s institutional bias against racism has sidelined these creatures of another era. For some, however, noting the alt-right’s irrelevance would undermine their value as a useful foil. In that sense, the alt-right isn’t the only group that refuses to accept racial progress in America. 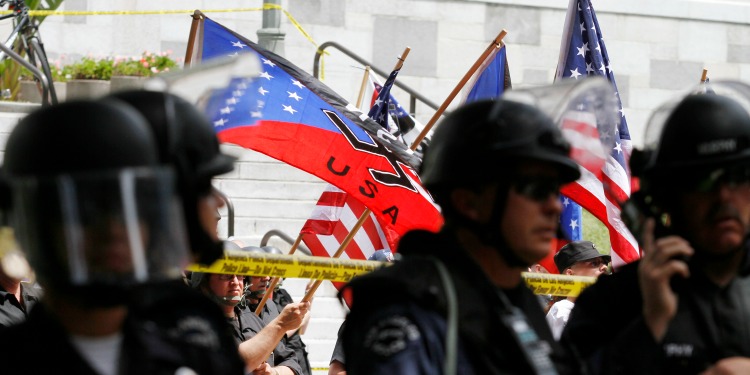