The Trump campaign is out of steam. The dozens of lawsuits the president’s legal team filed have been almost entirely withdrawn or dismissed. No court evaluating the campaign’s petitions has found evidence of the kind of fraud the president insists marred the 2020 vote. The public figures and electors tasked with ratifying November’s vote have resisted the pressures on them to overturn the public’s verdict. The “Kraken” turned out to be calamari.

But the president shows no interest in backing down. He continues to berate the Republican elected officials presiding over the certification of Joe Biden’s victory. Trump has not and will not concede the race, and he seems intent on flogging the allegation that his loss was illegitimate all the way into 2024. That is unprecedented. The usurpation that cynical Trump loyalists have attempted to execute over these last few weeks has no parallel. Yet, those who maintained confidence that this assault on the electoral process was doomed from the start did not base that assumption on faith alone. The process has been tested similarly and quite recently—in 2016, in fact. And although partisan roles were reversed, the idea that high-profile pressure alone could overturn the outcome of a duly constituted election was as fanciful then as it is today.

Last Friday, a Politico report itemizing the steps Joe Biden’s campaign has taken to ensure that the Electoral College affirmed the results of the November elections incorporated a valuable historical footnote: “The intensity of the threats Biden electors have faced so far, three days before they vote, pales in comparison with the 2016 lobbying effort,” the report read. What “lobbying effort” was that? Follow the trail back four years, and we’re reminded of the unrelenting public and private campaign to block Donald Trump’s ascension to the presidency.

In 2016, the plotters mapped out a harebrained scheme to compel enough electors to abdicate their roles and prevent either candidate from winning the 270 votes they needed to secure the White House, thus throwing the contest to the House of Representatives. Funny enough, that was Donald Trump’s plan in 2020, too.

Republican electors recalled receiving “thousands of emails a day” demanding that they abandon their duty to back Trump. Celebrities joined with advocacy groups dedicated to overturning the election’s results. An effort spearheaded by, among others, House Speaker Nancy Pelosi’s daughter, Christine Pelosi, to provide electors with a classified briefing on Russian interference in the 2016 election prior to the certification of the vote received the support of Hillary Clinton’s campaign chief. “Electors have a solemn responsibility under the Constitution and we support their efforts to have their questions addressed,” Clinton campaign chairman John Podesta wrote in December 2016. And though Democratic campaign attorneys lost most of their many efforts to challenge state-level vote counts, most of which were meritless and designed only to create the impression of unfairness (sound familiar?), Politico determined that they were “winning on optics.”

If this effort had only the tacit endorsement of some of the Democratic Party’s leading lights, it received unqualified support on many of the nation’s most prominent op-ed pages.

In the Washington Post, Harvard University law professor Lawrence Lessig insisted that it would violate “the fundamental principle of one person, one vote” if electors didn’t back Clinton. It would take just 37 Republicans “with the courage to perform their moral duty and protect the nation” to stave off the disaster of a Trump administration, observed Post columnist Kathleen Parker. “Please, be brave.” In the  New York Times, Columbia Law School professor David Pozen noted that there were few state-level legal obstacles and no constitutional impediments before would-be renegade electors. Moreover, given the candidate Americans backed at the polls, “the practice of sticking with the state’s top vote-getter loses moral force.” And even if Trump does emerge with the requisite votes to be inaugurated, the trauma of 2016 should become a torch forever borne by his opponents. Anger over the “tainted election” “shouldn’t be allowed to cool,” Times columnist Paul Krugman wrote.

This campaign was an ugly one. The “The #NotMyPresident Alliance,” an informal coalition of anti-Trump groups devoted to pressuring the Electoral College to elect a “more responsible candidate than Donald Trump,” distributed a spreadsheet listing the personal information of dozens of Republican electors with the aim of hectoring electors into submission. The group, of course, “rejected all acts of aggression and violence,” but the potential for such acts nevertheless existed. It was, therefore, by design that individual electors were singled out, some of whom faced harassment, received death threats, and required plainclothes state police protection. The activism became so intense that Republican secretaries of state issued statements decrying the “intimidation” they faced from anti-Trump forces.

If you don’t remember hearing much about all this at the time, that’s partly because the 2016 plot had about as many prospects for success as the 2020 plot. Ultimately, these tactics were far more successful than what pro-Trump forces have attempted in 2020. There were two faithless Republican electors in 2016—more than in any other presidential election since World War II. One GOP defector—Texas-based delegate Chris Suprun—briefly became a national celebrity. Yet these efforts produced none of the anxiety we’re witnessing from the press today.

Our very survival as a nation requires the losing political faction to acquiesce to legitimate defeat, wrote Times editorial board member Jesse Wegman. By failing that test, Republicans are no better than “the Russians or the Chinese.” The Trump campaign’s groundless lawsuits are both “shocking and horrifying,” the Atlantic’s David Graham noted. Worse, they had contributed to the widespread impression among Republicans that the election was illegitimate—a concern mirrored by their Democratic counterparts for much of the Trump presidency, though it was not met with similar consternation from the press. The Clinton camp’s 2016 agitation was such a non-event for much of the political press that even CNN’s Chris Cillizza presumed that most observers had never even followed an Electoral College vote before. And although it is a revealing admission, he’s probably right.

To the extent that the efforts to abrogate the outcome of the 2020 elections come straight from the White House, it does represent a new and possibly dangerous precedent. Though it’s hard to see who might follow this example. Adoring clown makeup and setting yourself on fire sets a precedent, too, but not one that those of sound mind would follow. That does not absolve the pro-Trump plotters of guilt, nor does it render the vandalism in which they’re engaged any less reckless. As with the plotters in 2016, the threat posed by Trump’s brand of agitation is its potential to radicalize individuals prone to radicalization. The threat is not, however, the potential usurpation of political power and the overruling of the voters’ will. 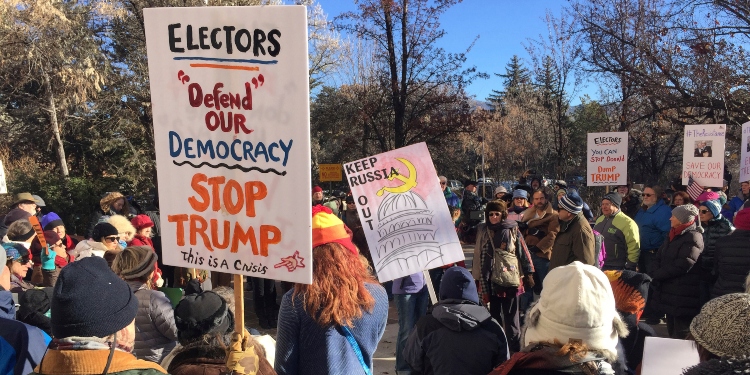