You’ve got to hand it to progressives. So assured are they that their policy prescriptions are ultimately for the best that they routinely demonstrate utter disregard for consistency or the consequences of disseminating untruths. Everything is fair game, so long as it advances their preferred agenda. Such was the brazen course taken by liberals in their pursuit of a “living wage,” e.g. a dramatic increase in state and federal minimum wages.

In the effort to create an issue on which the party could campaign in 2014, Democrats settled on hiking the minimum wage. For many of its advocates, this policy preference was the result of a noble desire to provide support for the less fortunate amid the lingering effects of the 2008 financial downturn. Good intentions have always inoculated the left against criticisms of the consequences of their policy preferences.

There was a cynical motive to this crusade on the part of liberals, too. The political imperative to blunt the GOP’s anticipated momentum heading into the midterm elections always trumped the negative economic effects of a minimum wage hike. Democrats professed to want to give the little guy a leg-up, and research that suggested a minimum wage hike would have the precise opposite effect for hundreds of thousands of little guys was dismissed.

In February of 2014, the non-partisan Congressional Budget Office released a study that found raising the minimum wage to $10.10 per hour by 2016 would hike earnings marginally for up to 16.5 million workers, but that would come at a cost. Approximately 500,000 lower-skilled workers would lose their jobs, and “the income of most workers who became jobless would fall substantially.” In early 2014, with the official unemployment rate stable at 6.7 percent, that did not seem to many like a tradeoff worth making.

Nonsense, the left declared. Not only was the tradeoff worth it, but there was also no tradeoff at all. That’s right; follow this logic. Think Progress’s Bryce Covert assured a nervous nation that, even if the CBO study was accurate, other research suggested that the increase in income for millions of lower-skilled workers would result in more spending, which in turn creates jobs. “There is also real world evidence that minimum wage increases don’t hurt jobs,” she wrote, citing the Center for American Progress. “After looking at the increases during times [of] 7 percent unemployment or more, the rate actually declined 52 percent of the time and in a few cases remained unchanged.”

Covert was hardly alone. The CBO’s assessment of the negative impact on employment was “fuzzy and unreliable,” while it probably underestimated the positive impacts of the minimum wage, declared National Memo’s Joe Conason. Even the president and the government he leads got in on the act. “There’s no solid evidence that a higher minimum wage costs jobs,” Barack Obama declared. Over at the Department of Labor, a web page dedicated to serving as a minimum wage “myth buster” soon appeared, which echoed the president’s sentiments. “Myth: Increasing the minimum wage will cause people to lose their jobs,” the Labor Department truth-seekers averred. “Not true.” They cited a letter to the president signed by 600 economists who insisted that a minimum wage hike had “little or no negative effect on the employment of minimum-wage workers.”

It was perhaps with these appeals to authority in mind that the nation’s most liberally governed states embarked on a brave journey into the unknown. This week, New York and California’s legislatures both approved minimum wage increases, not to the $10.10 per hour, for which President Barack Obama advocated and approved for federal contractors, but to $15 per hour. Despite both states having higher unemployment rates than the national average, their respective governors are expected to sign those measures. Their advocacy campaign successful and complete, the left is now shifting from denying that there will be any adverse effects on employment as a result of the minimum wage hike to admitting that those effects will materialize and lead to a kind of desirable economic Darwinism.

“The $15 minimum wage sweeping the nation might kill jobs — and that’s okay,” read the headline gracing Washington Post WonkBlog journalist’s Lydia DePillis’ report on the unsatisfactory outcomes of a massive increase in the state-level minimum wage. She quotes a variety of liberal economic policy activists who are now hedging their bets. “For its advocates, the question isn’t whether minimum wage hikes will kill jobs, but rather how to help people who end up unemployed when they do,” DePillis reported. That is, “when” they become financially dependent on the federal safety net; not “if.”

Even California Governor Jerry Brown admits that there will be pain associated with such a substantial minimum wage hike, but that he is obliged to accommodate the “principle” of mandatory wage growth commensurate with income levels that can support a family. This contention might be the most frustrating misconception about the minimum wage — it was never designed to be a single-source income sufficient to sustain a household. If that’s the most frustrating claim made by minimum wage activists, the most galling is the contention from some academics that the law’s losers deserve their lot.

“Why shouldn’t we in fact accept job loss?” asks New School economics and urban policy professor David Howell, who’s about to publish a white paper on the subject. “What’s so bad about getting rid of crappy jobs, forcing employers to upgrade, and having a serious program to compensate anyone who is in the slightest way harmed by that?” [emphasis added]

And you thought conservatives were heartless. At least the right demonstrates some regard for an individual’s own labor and values the stable neighborhoods that develop around a culture of productivity and industriousness.

DePillis’ report closes with a note of uncertainty. We’re in “uncharted waters” here; anything could happen. But the effects of dramatic minimum wage hikes on low margin businesses are almost always the same; fewer hours and less work for employees, reduced product or service quality, and, when all else fails, higher prices for consumers. “The thought process is that you’re going to put more money in people’s pockets,” said Albuquerque café owner Myra Ghattas in a recent L.A. Times report who is struggling to accommodate just a $1 hike in his state’s minimum wage. “In theory, that makes sense. But people end up getting hours cut, and they don’t actually make any more money.”

For larger firms that can afford to simply eliminate minimum wage positions by replacing them with a touch-screen self-service station, for example, the choice becomes a no-brainer. The self-styled most compassionate among us believe that the priority should be providing those who have their position eliminated as a result of this law with government benefits as soon as possible. While their solution to the problem they created mitigates some immediate suffering, it also robs the newly jobless of their sense of agency and pride. Families deteriorate, neighborhoods follow, and social cohesion worsens.

If there is one particular social benefit to these minimum wage laws, it would be that they have led liberals to let their veil slip. For too many on the left, the ends always justify the means, even if those means are willfully deceptive. The progressive project demands compromises from us all. 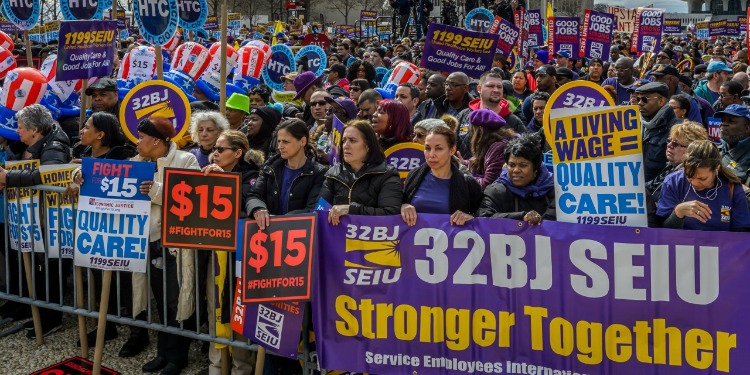