Along with sterilizing the landscape of the Democratic Party’s remaining moderates, the cleansing fire of the last election cycle has incinerated all of the left’s comfort blankets.

As reweighted exit polls have demonstrated to the shock of many political observers—myself included—Donald Trump improved on Republican performances among a variety of core Democratic blocs. Trump did better than Mitt Romney among Hispanics and African-Americans. College educated voters did not abandon the GOP as polls had predicted they would. A massive shift in the industrial Midwest among traditionally Democratic constituencies delivered states to Trump a GOP presidential candidate hadn’t won since 1984. To all this paradigm-destroying information, Democrats have responded by clinging to Hillary Clinton’s popular vote lead like flotsam in a shipwreck. True, her lead in the raw vote totals is substantial and growing, but that is an indictment of the Democratic Party’s failure in 2016 and not an excuse for it.

With ballots still being counted, Clinton’s lead over Trump may end up exceeding 2 million votes. At 63.6 million to 61.9 million votes, as of this writing, Clinton leads President-elect Donald Trump by over one full percentage point. That’s nothing to sneeze at. Both the Trump administration and Republicans should be mindful of the fact that this is only the fourth election in American history in which the victor in the Electoral College lost the popular vote. That understanding should temper their instinct to ride roughshod over their routed opposition.

As a balm to sooth the left’s wounded egos, the notion that a plurality of the nation’s voters did not support Trump is potent stuff. It is also, however, entirely insufficient as a source of legitimacy and only serves to postpone the Democratic Party’s reckoning with its electoral problems.

Democrats spent the last two weeks comforting themselves in the accurate notion that their party has won the popular vote in six of the last seven presidential elections. Yet they’ve only won the White House in four of those seven. This should lead to a level of introspection on the part of Democrats that they’ve not yet displayed. By especially narrow margins in places like Pennsylvania, Wisconsin, and Michigan, Donald Trump was able to pull off the most resounding Republican victory in the Electoral College in over 30 years. Those victories demonstrate that the votes available to Donald Trump—if not Republicans of a vanilla variety—are far better distributed than are reliable Democratic votes in primarily urban enclaves.

Rather than confront this set of unfortunate circumstances, Democrats have succumbed to fits. The Electoral College has become the enemy of the people. It has been branded anti-democratic and/or the product of racism and slavery. Two ranking Senate Democrats vented their frustrations on the electoral institution rather than their party’s disappointing nominee. Many on the left have resurrected a campaign to undermine the Electoral College, either through total elimination or by compelling states to implement laws that compel the state’s electors to vote for the national popular vote winner.

All this is sadly misguided. The Electoral College, itself the result of compromise by the Founders, isn’t going anywhere. The federal government is a creation of the sovereign states, not the other way around. The generally well-founded fear of majoritarian democracy displayed by men like Hamilton and Madison is evident in the compromise that led to the creation of the Electoral College—a character that has been diluted in the intervening centuries. Democrats who indulge in self-gratifying tantrums about the un-American nature of the outcome of the 2016 elections are demonstrating only how little of the American tradition they retained from primary schooling.

What the results of the 2016 presidential election should be communicating to Democrats is that they need a more efficient geographic allocation of their vote share, and that means recreating a more robust coalition of voters. In assessing the Obama White House’s decision to cede the white working class voter to the GOP, New York Times columnist Thomas Edsall astutely noted that the New Deal coalition of which they were a part maintained “economic coherence.” Democrats have fallen for their own mythology insofar as it is now the party of safety nets and benefits, but that was not the party of Roosevelt. That Democratic Party was a party of productivity, not dependency. It was a party of disparate cultural and intellectual traditions, not homogeneity.

The Democratic Party’s response to their failures in the Electoral College is equivalent to shooting the messenger. The party should adapt and adjust to again appeal to winning coalitions in the whole country, not force the country to accede to the will of California and New York. Trump and the Republican Party he leads may falter or overreach. Democrats could win back Congress and the White House again by default even if they didn’t change a thing. Given the contempt the party has shown toward the country’s institutions and the voters who elected the next president, however, they wouldn’t deserve the honor. 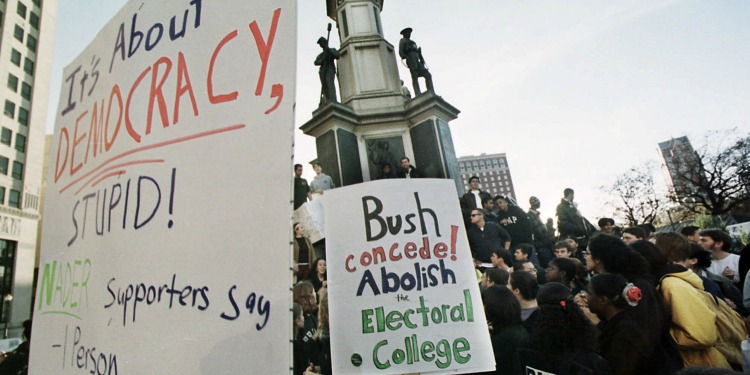