New York City was hardly immune from the violence that rocked cities around the country over the weekend, but, before Monday night, it was by no means the hardest hit. The day’s peaceful protests took on a more reptilian character by night, yes, and there was isolated looting. But public officials appeared to believe that a more hands-off approach would avoid exacerbating tensions further.

And yet, it was clear by Monday morning that this strategy was failing. The violence was intensifying around the country. An escalating number of arrests in the city—one in every seven, according to Deputy Commissioner for Intelligence and Counterterrorism John Miller—were not residents of New York. Miller added that intelligence indicated that unnamed groups were preparing a more organized threat to the city. These organizations were deploying sophisticated communications strategies and scouting tactics. They had organized shock forces and medics. They were readying weapons—rocks, bottles, and accelerants—that were hidden throughout the city.

They knew what was coming.

Reluctantly that afternoon, the mayor’s office in coordination with Governor Andrew Cuomo imposed an 11 p.m. curfew on the city, but any sentient observer knew this half measure would prove worse than useless. An effort to lock down the city three hours after sunset would arrive three hours too late. By that point, as the last several days of violence had shown, passions would have long passed the boiling point and the destruction would be well underway. And so it was that, when the sun went down on the evening of June 1, the city bore witness to violence and looting on a scale unseen in over a generation.

What had been a peaceful crowd minutes earlier devolved into bands of roaming marauders. Retail outlets in the center of midtown Manhattan were ransacked, even as formations of police stood idle mere feet away. Iconic landmarks like the flagship Macy’s in Herald Square, just one block from Penn Station, were besieged by unmolested rioters. Where police did respond, they flailed their batons wildly at looters in scenes reminiscent of the grainy technicolor anarchy that prevailed outside the 1968 Democratic National Convention.

“No cops anywhere,” the Daily Beast’s Rachel Olding reported. “People are speeding down the street in SUVs. Total lawlessness.” Indeed, she later added, organized bands of what appeared to be relatively well-heeled young people in expensive cars were everywhere, and they seemed to be coordinating their pillaging campaigns.

The acquiescent policing strategy that failed Sunday night had failed again on Monday. But though they vacillated between abject passivity and directionless aggression, it’s not clear that the NYPD had many other options available to them. At the height of Sunday night’s violence, Brooklyn’s district attorney Eric Gonzalez implored city residents to send “photos or videos of alleged police brutality.” New York City Mayor Bill de Blasio closed his eyes to the chaos. “This city is fully under control and overwhelmingly calm and peaceful,” he declared in defiance of the stark realities around him.

The night before, the mayor called for the badge of an officer who was caught on video brandishing his gun amid violent protests. Only did we later learn that the officer had done so in defense of his supervisor who minutes earlier had been struck with a brick. Where they did respond, police were assaulted with blunt instruments or targeted by speeding vehicles. There seem to be no fixed rules of engagement. The city’s police were clearly targeted by both the demonstrators and the city’s elected officials. What were they to do but disengage?

For his part, Gov. Cuomo admonished city officials, claiming “the NYPD and the Mayor did not do their job last night.” That’s doubtlessly true, but neither did the governor, who declined to follow the lead of other state governors and overrule New York City’s hapless mayor by deploying the National Guard to quell this violence.

At every level of government, New York’s elected officials have allowed themselves to wallow in a solipsistic conception of mass violence as a righteous expression of the popular will. They treat these acts of vandalism and brutality as abstractions—the noble defense of some principle that cannot be infringed upon lest you invite more violence. But the issues of police brutality, structural racism, and the reformation of the culture that pervades law enforcement are for now subsumed by the all-consuming threat of physical violence. Those weighty and pressing concerns have been devalued by the chief proponents of reform because they failed to see to the immediate safety of the voting public who must underwrite them.

America’s urban centers now face an existential crisis brought about by the twin horrors of the pandemic and mass street violence. Already, the various states of lockdown that pertain around the country have scattered their professional classes—disaggregating the American city’s commercial workforce. The combination of unnerving density, economic devastation, and civil unrest will accelerate the tax base’s flight to the suburbs—the engines that fuel America’s profligate and unerringly progressive cities.

There can be no doubt that, once this violence is subdued, the lockdowns that contributed to this crisis and are imposed only on America’s law-abiding citizens must end. Immediately. As one demonstrator told the New York Times, “No one’s afraid to lose their jobs because there are no jobs.” The proprietors of the firms that are under siege today must be allowed to return to their businesses, restore them, and, above all, protect their investments. No one else will do that for them.

But that’s tomorrow’s problem. Today, ending the violence in America’s cities is the primary goal, and a hands-off approach won’t get the job done. The city appeared to acknowledge its folly with the announcement on Tuesday morning that curfew would be extended for nearly a week, and it would begin at sundown. It remains to be seen whether New York’s elected officials can provide for the safety of the lawful with the same vigor they put in to doting over the lawless. 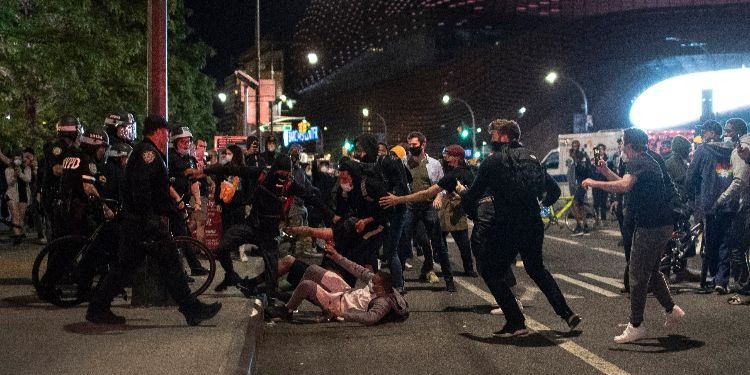