“This is a country on the verge of war,” Vox.com’s Ezra Klein declared. Indeed, to hear him tell it, the nation’s civil and political divisions are so pronounced, so intractable, you’d be forgiven for presuming that he believes insurrectionary violence is all but inevitable. And if you spend your days engaged in political combat with a narrow, self-selected band of committed partisans, it might feel that way—particularly against the backdrop of several ongoing national crises. But a survey of the national opinion landscape suggests the country is not nearly as divided as the arbiters of American political discourse say.

For example, the national debate that erupted with force and, in some areas, violence over whether the arrest-related killing of George Floyd was the product of systemic abuses isn’t really a debate at all. And the arguments made by the peaceful demonstrators who protest the apparent disparities in how policing tactics are applied to minorities aren’t especially controversial.

A Morning Consult survey released on Monday showed that a majority of American adults support the “ongoing protests in response to the death of George Floyd and others in the black community. That total includes a majority of Democrats and a substantial plurality of self-described independents. And while only 38 percent of Republicans shared that view, the same number—38 percent of Republicans—were opposed. That survey also found that a majority, including both black and white Americans, believe that “police violence against the public” is a more serious problem at the moment than “violence against the police.”

These results aren’t unique to this poll. A Monmouth University survey released on Tuesday found that a majority of Americans believe police officers are more likely to use force against a suspect of minority descent. That figure includes nearly all black respondents and a plurality (49 percent) of whites—a figure that has nearly doubled from 2016, when only 25 percent of white respondents agreed with this statement. This sentiment prevails even though most Americans (72 percent) have not experienced harassment by police, nor have their immediate family members.

A Yahoo News/YouGov poll conducted in the immediate wake of Floyd’s killing found that over six-in-ten American adults thought race was a major factor leading to his death. Nearly all Americans believed the officer involved in his death was either charged appropriately (42 percent) or should be charged with a more serious crime (47 percent).

The notion that America’s minorities face hurdles when dealing with authorities is a majority proposition.

What’s more, while Americans have a durably favorable view of police, they are not resistant to the concept of reforming that institution to address these perceived disparities. As the Washington Post’s David Byler demonstrated, public-opinion polling has shown for some time that substantial majorities favor legal reforms that would impose more restrictions on police conduct.

What kinds of reforms, exactly? YouGov’s poll tested a variety of tactical restrictions on police, most of which are popular but do not amount to systemic overhauls. To achieve that, every political faction’s ox must be gored. Democrats will have to submit to the reformation of public-sector unions like police unions, which negotiate contracts in the absence of an adversarial partner and have secured arbitration rights that often shield officers accused of abuse from consequences. Republicans will have to rethink the statutes that pertain to qualified immunity, which protects all but the most malicious or incompetent officers from prosecution. And everyone will have to concede that police are busy enforcing too many laws.

These proposals are all subjects of debate, but the lack of consensus around a particular reform is distinct from the notion peddled by dogmatists and agitators that America’s hidebound political culture is resistant to any reform at all.

Polling shows that Americans are committed to the perfection of the Union and the pursuit of ideal and uniform justice, but they are not for rioting, looting, and violence amid that pursuit. The Morning Consult survey found, when asked if they would support “calling in the U.S. military to supplement city police forces” to subdue violence in America’s urban centers, that 58 percent of respondents were either strongly or somewhat in support. That figure includes a majority of Democrats, independents, and Republicans. While there is an ethnic divide on the question (more whites and Hispanics support this proposition than African Americans), the partisan divide is far more muted.

Just as we were told by the talking class that the divisions over restrictions on social and economic activity amid an acute pandemic were tearing the nation apart, when in fact polling indicated that large majorities approved of those measures, we are now being informed that we’re tearing ourselves apart over issues that are actually characterized by broad consensuses. It would not be hard to find contrarians who disagree with these majorities, but that’s a healthy condition in a classically liberal republic like the United States.

Overall, America’s divisions aren’t nearly as stark as our opinion-makers perceive them to be. That is, of course, a good thing. 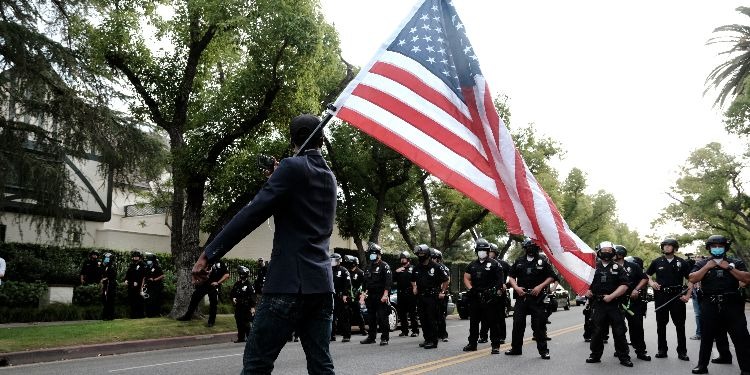