When he took the stage at his final presidential press briefing, the reporters in attendance couldn’t have known that Barack Obama’s opening statement would be a subtle indictment of political media’s behavior over the last eight years.

“I was sorely tempted to wear a tan suit today,” Obama began to the laughter of the assembled press corps. It was an inside joke but, for anyone who got the reference, not a flattering one. Obama was alluding to his August 2014 decision to wear a tan-colored leisure suit to a press briefing, prompting an insular cast of Beltway-based opinion-makers to indulge in some light-hearted mockery of the president’s style. NBC News reported that it was “the president’s outfit—not his words—that captured the attention of many viewers” (though they mostly cited reporters and opinion writers’ tweets).

This was a shame, too, because this was a consequential press conference. It was his first since pro-Russian “separatists” attacked and destroyed a civilian airliner over Ukraine using a Moscow-provided missile battery. It was also the first chance the press had to ask the commander-in-chief about ISIS’s blitz across Iraq, which was closing in on the crucial Mosul Dam.

No episode so distilled the kind of vapidity that typified political media in the Obama years—an insipidness that was too often rewarded by those in influential circles. The openly center-left press has begun to display some shame over this comportment, albeit without any introspection or self-awareness. “Please cancel the White House Correspondents Dinner,” begged Jacob Weisberg, the editor-in-chief of Slate Group. “Unseemly spectacle, totally at odds with the press holding administration accountable.” That may not be idle posturing, either. According to CNN media reporter Brian Stelter, “a top news exec, responsible for buying lots of tables, told me yesterday: ‘I think there’s a real chance the dinner won’t happen.’”

Weisberg is right. The White House Correspondents Dinner is an unbecoming display. Billed as a moment in which two oppositional institutions (media and the executive branch) blow off some steam, the WHCD has become a moment for reporters to luxuriate in the attention lavished upon celebrities. It is an opportunity for reporters to be seduced by the pageantry and glamour enjoyed by the president and those close to him. What was surely once ironically dubbed “nerd prom” has taken on a more literal dimension.

It is grimly poignant that some in political media only now see the ugliness of cavorting with a presidential administration and a cavalcade of celebrities when it’s a president they don’t like and celebrities in whom they have no interest. They were once quite protective of this institution. Former Politico reporter Patrick Gavin made a documentary about the annual spectacle—a film that he contends resulted in his ostracism by his fellow reporters.

This is not to say that the White House Correspondents Association does not play a valuable role, or that their confrontations with the Obama administration were not fully warranted displays of integrity. The institution has attacked this White House for failing to hold press conferences, for relying on in-house photographers over professional journalists, and for exceeding their authority by demanding changes to pool reports before they are disseminated. No doubt, the WHCA will be an important and vocal check on the Trump administration—they have already butted heads. But the most visible symbol of the WHCA is their lavish April dinner, and it is that display of compromising chumminess that is finally starting to seem like an imprudent luxury.

“You are not supposed to be sycophants; you are supposed to be skeptics,” Obama told reporters with just hours left in his administration. “My hope is that you will continue with the same tenacity that you showed us.” Obama’s urging preceded an exit interview in which the outgoing president somehow made no news.

When Barack Obama touted his sanctions against Russia and his administration’s work to repeal the Defense of Marriage Act, no one asked crucial follow-ups. For example, whether Donald Trump should do as Obama did and veto congressional-approved lethal aid to Ukraine or instruct his attorney general to simply stop defending laws with which he disagrees. It was a forgettable end to a friendly relationship between reporter and president that covered neither in glory.

As Politico’s Jack Shafer wrote, the prospect of a Trump presidency has infused new vigor into the sclerotic practice of political reporting in Washington. It is a sorry commentary on the reporting establishment that it takes a Republican president—and a uniquely hostile one, at that—to compel reporters to take that vaunted “adversarial relationship” seriously. If the culture of White House reporting does pursue its mission earnestly once again, though, it will only be for the good. America’s political ethos may just be, dare we say, great again. 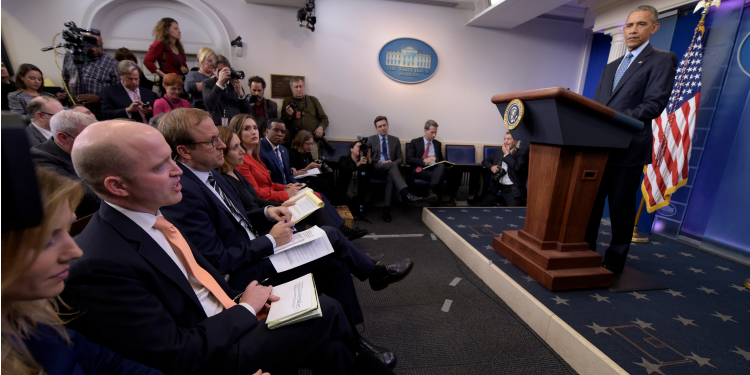