The United States of America does not make a fetish of voting. For the “vote or die” crowd, that’s a cause of great shame.

It seems like virtually every foreign election provides those already inclined to mock American political insularity with a chance to indulge their prejudice. One of their sources of self-gratification has been America’s relatively low rates of voter participation. They recently found a comforting foil in France, where 75 percent of eligible voters turned out on May 7 to elect Emmanuel Macron the new president.

“Americans face a number of hurdles beginning with registration,” BBC News explained to their inquisitive European readers. They added that voluntary voter registration and identification laws at the polls may drive down turnout, despite the fact that “200 million Americans are now registered to vote for the first time.” Yet 64 percent of the eligible voting population registered to vote, according to Pew Research Center data, and nearly 87 percent of that population voted in 2016. Still, there’s clearly a discrepancy here. So what is its cause?

Some of it is arithmetic. In France, voter registration is automatic when a citizen turns 18, so the population of eligible voters in France is larger than in the United States. When factoring that larger eligible pool of voters into voter registration tallies, the French achievement seems less dramatic. Not everyone in America who is over the age of 18 has enfranchisement rights. According to the United States Election Project’s more accurate estimation of the eligible voting population, 59.7 percent turned out in 2016. Excepting the 2008 elections, that is better than any presidential race since 1968.

Some, like civil rights attorney Kristen Clarke, contend that participation rates are higher in nations that schedule elections on a work holiday or a weekend. As elections analyst and former Justice Department attorney and Pew analyst David Becker noted, these tortured efforts to make a political point confuse apples and oranges.

The U.S. Government Accountability Office reviewed 24 studies on the subject and found “with the exception of vote by mail, each of the alternative voting methods was estimated to change turnout by no more than four percentage points.” With a third of total votes now coming from mail-in balloting well before Election Day, Becker noted, day-of voting is less relevant than ever. And while declining participation rates in off-year and local elections is concerning, participation alone is no indication of a robust and liberal democratic system.

Take, for example, Iran, which the American left seems certain is on the precipice of a democratic revolution. “Voter turnout in Iran was 70 [percent],” wrote The Nation’s John Nichols. “The worldly [and] moderate candidate prevailed with ease.” “Iran just taught the US a lesson in democracy,” declared Georgetown University law professor and human rights attorney Arjun Sethi. “Ironic that Iran extends voting hours due to massive turnout, but in US certain groups try ([and] succeed) in restricting voting rights [and] access,” asserted Barack Obama’s former ambassador to Sweden, Azita Raji. This is, at best, fatuous nonsense. At worst, these are reckless apologetics for ruthless Iranian theocrats.

Too many on the left parrot the notion an Iranian “moderate” won Friday’s elections without noting that this same “moderate” has occupied the presidency since 2013. In that period, executions have surged to their highest rates since 1989, many of which include juveniles and occur in public. Tehran is increasingly arresting journalists, opposition leaders, and Christians. Women are discriminated against in law, child marriage is not prohibited, and religious police strictly enforce Islamic dress codes. In March, the UN Special Rapporteur for Human Rights in Iran admonished the Islamic Republic for considering laws that would further restrict press freedoms and make “criticizing government officials or publishing false news is punishable by 74 lashes.” This is not a moderate government.

Yes, 70 percent of the Iranian public turned out to vote for Rouhani’s anti-hardline “reformists,” but they only enjoy power because the 78-year-old supreme leader, Ayatollah Ali Khamenei, consents to it. That vote provides this brutal regime the patina of legitimacy, but what are Iranian citizens supposed to do? Stay home? With their vote, they register their discontent, even if it is a merely cathartic exercise. France, too, is a society that struggles with insecurity—both as a result of rampant joblessness and all-too-frequent incidents of mass-casualty terrorism. Dissatisfaction can lead to increased political awareness and participation, too, but that is not something to celebrate.

Popular Western cultural has attached a stigma to political disengagement. It is, to some extent, earned; dropping entirely off the civic spectrum is an act of self-indulgence, not nobility. But political disengagement is also a luxury and a vote of confidence in society’s ability to function without their obsessive monitoring or guidance. Despotic countries tend to have remarkably high rates of voter turnout in their “elections,” but few would dare call them free. As Pew’s study showed, more voters as a share of the voting-age population turned out in the United States than did so in Japan or even Switzerland, where  38.6 percent of voting-age adults went to the polls in 2015. None but the most shameless propagandists would claim Japan and Switzerland were less mature liberal democracies than the Islamic Republic of Iran.

Pluralist Western societies that do not make a totem out of political participation for its own sake are not advocating apathy but self-determination. Those who celebrated high voter participation in France and Iran perhaps did not know that they were explicitly decoupling the practice of voting from political freedom. In the process, they helpfully demonstrated why free societies and true liberals don’t force people to care about politics.

An earlier version of this post asserted that 87 percent of the eligible U.S. voting-age population had registered to vote. 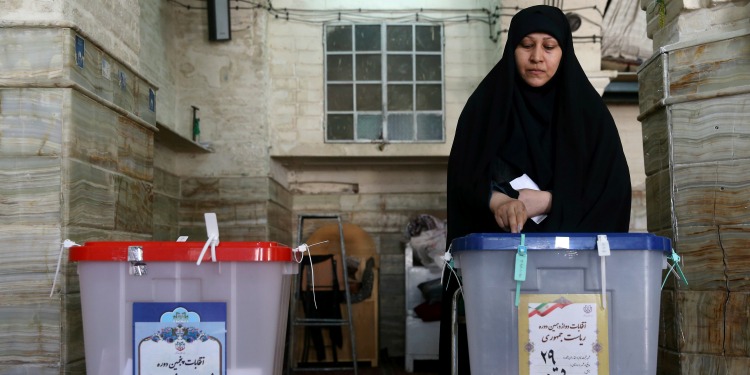