The jury empaneled to try former Minneapolis police officer Derek Chauvin took just 12 hours to decide his fate. The evidence with which they were presented was sufficient to find Chauvin guilty on all counts for his role in the murder of George Floyd.

That was, ostensibly, what people like President Joe Biden wanted. Just hours before the jury rendered its verdict, Biden said that he hoped the jury would reach the “right” decision in accordance with his understanding of the “overwhelming” evidence against Chauvin. They did just that, but neither the president nor the vice president took much solace from the outcome.

“America has a long history of systemic racism,” Vice President Kamala Harris said in a joint primetime address to the nation. Biden agreed. “It was a murder in the full light of day, and it ripped the blinders off for the whole world to see the systemic racism the vice president just referred to,” the president added. “The systemic racism is a stain on our nation’s soul.”

They weren’t alone in seeing this issuing of deliberative, dispassionate justice as a moment to mourn “systemic racism” in America.

Sen. Elizabeth Warren pledged to “keep fighting to dismantle systemic racism and fundamentally transform our justice system.” George Floyd’s murder was “a manifestation of a system that callously devalues the lives of Black people,” Sen. Bernie Sanders’s statement read. “We must boldly root out the cancer of systemic racism.” While the verdict “provides some measure of justice and accountability, systemic racism is still pervasive in American life,” New Jersey Gov. Phil Murphy insisted.

From an activist’s perspective, the concept of “systemic racism” has the unduplicable virtue of being vague. It is a blanket indictment of various indistinct establishments, thus failing to pique the ire of and produce a self-defense from the specifically accused. It is sufficiently indiscrete so that it doesn’t lend itself to any focused remedy—something that a more precise indictment of a specific institution’s culture of racial discrimination wouldn’t be able to evade. Thus, the phrase’s broadness and ambiguity render it unfalsifiable.

But occasions like the Chauvin trial provide us with some evidence that undermines the theory’s fundamental precepts. “All we want is the police to obey the law,” said former adviser to Barack Obama, Van Jones. “And when they break the law, they should have handcuffs just like anybody else.” Of course, he’s right. And what other mechanisms exist to enforce that social covenant equally and without prejudice but our layered, multi-institutional systems of law and government?

Ah, but what about when the law seems to be unevenly applied? What about the privileges enjoyed by law enforcement that allows abusive officers to evade justice? Jones also insisted that the dispensations afforded police officers need to be pared back. But how? Via our systems of law and government. Once again, the overlapping systems of constitutional governance are not an insurmountable obstacle but the tool through which social reformers can secure better outcomes.

This conception of systemic challenges lends itself to the theory of “instrumental activism” sociologist Talcott Parsons identified as a feature of the uniquely American political ethos. It is the idea that, not only is the American playing field not so stacked against you that your objectives are unrealizable, but that your own sense of agency is an empowering source of individual salvation. That ethos is a problem from the perspective of a particular sort of activist for whom invocations of “systemic racism” have become a catechism. The understanding that the system is malleable and reformable and that its conventions can and do produce just outcomes forces you to engage with it. By contrast, the belief that the system is irredeemably flawed demands little of you but fatalism, hopelessness, and resignation.

Thus, the purveyors of fatalism, hopelessness, and resignation appear resolved to frame this episode not as a victory but as more evidence that the system is beyond redemption. “Is justice convicting a police officer, or is justice convicting America?” asked successful author and director of the Center for Antiracist Research at Boston University, Ibram X. Kendi. “The problem is structural. The problem is historic … Justice has convicted America. Now, we must put in the time transforming this nation.” The chief executor of the New York Times’ “1619 Project,” Nikole Hannah-Jones, agreed. Modern policing, she said, “has direct lineage to the slave patrols.” Therefore, “it’s difficult to reform an institution that, in many ways, is doing the exact function that it was created to do.”

You see, the system can’t work. It should not be capable of dispensing justice, and it cannot be subject to incremental reforms that make the pursuit of equitable and just outcomes more likely. If America’s problems are “systemic,” they’re too big for such modest measures. The “system” must go.

You expect to hear these sorts of quasi-revolutionary assertions from professional activists, but what sense does it make to hear them reiterated by the custodians of that very system? From the president on down, those who parrot these sentiments are positing a theory of their own illegitimacy. That would be odd enough if it was supported by evidence, but to hear it on a day when the system clearly worked is mind-bogglingly bizarre. 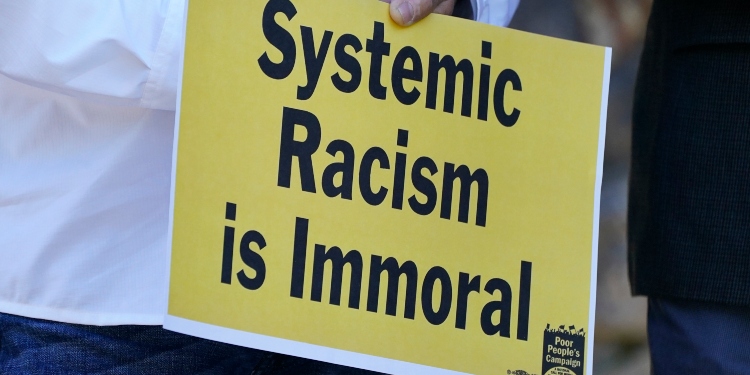