Thirty years ago, defying Mao Zedong’s invasive gaze, pro-democracy demonstrators armed with foam and paper-mâché cobbled together an icon. Combining the aesthetics of Soviet statuary with Western classicism, the 33-foot Goddess of Democracy was not intended to evoke the Statue of Liberty. Indeed, the student protesters who designed it were self-conscious about the comparison between their idol and the colossus in New York’s harbor, but the ideals and emotions the two sculptures invoke are so universal that their distinguishing cosmetic features were inconsequential. It could not be allowed to stand, and it was destroyed after just five days, along with China’s student-led democracy movement, by the People’s Liberation Army.

The Goddess of Democracy was born again in Hong Kong by a new generation of democratic activists who are far less concerned with offending the sensibilities of Beijing’s elite. Replicas of the famous statue have become objects of renewed veneration and antipathy as anti-government protests enter their 10th week. But the citizens who have taken to the streets to protest Beijing’s encroachment into China’s bastion of political liberalism are far less shy about conveying pro-American sentiments. Demonstrators have been seen flying U.S. flags, singing the American national anthem, and demanding civil liberties akin to those enshrined in the Bill of Rights. Sadly, the affection the people of Hong Kong have shown Americans is not entirely reciprocal.

The Trump administration’s State Department has unequivocally condemned Beijing’s efforts to undermine Hong Kong’s unique political autonomy. American diplomats have even met with student demonstrators. When one of those diplomats was targeted for harassment, department spokeswoman Morgan Ortagus called it the work of a “thuggish regime.” But the administration’s approach to the crisis in Hong Kong contrasts sharply with Donald Trump’s. The president insisted that “President Xi of China has acted responsibly, very responsibly” when asked about one of the many nights of violence between pro-democracy protesters and police. He called the protests “riots”—an immeasurable gift to Beijing, whose state media widely publicize the remarks—and insisted that the matter was a purely domestic one “between Hong Kong and China” alone.

It’s not uncommon for American presidents to table human rights and democracy promotion in service to more pressing diplomatic considerations, particularly when negotiating with the representatives of an authoritarian state. But this president has a habit of failing to provide even cursory rhetorical support for the aspirations of freedom-loving peoples around the world, especially when those aspirations are most threatened. And the worst may yet be in store for Hong Kong.

Chinese authorities may have had all they can take from the people of the special administrative region. Riot police are applying a heavier hand to protesters in recent days, beating demonstrators and firing non-lethal ordnance into crowds at point-blank range. Mobs of pro-Beijing vigilantes have been filmed attacking demonstrators with the tacit consent of authorities. China is putting pressure on foreign-owned firms to discipline its employees who show support for the protests or market materials that could be considered an assault on the People’s Republic’s territorial claims. The demonstrations over the weekend were condemned by Chinese authorities as “deranged” acts, indicative of the “first signs of terrorism.” These ominous warnings coincide with reports that the PRC is amassing military assets on Hong Kong’s borders.

If Donald Trump’s aim is to keep mum about Hong Kong to avoid complicating negotiations with China over trade, Beijing isn’t giving him any credit for the effort. Mainland media outfits now claim that the “black hand” of the State Department and Central Intelligence Agency are responsible for the unrest in Hong Kong. Thus, Trump has staked out indefensible terrain, irritating both Beijing and pro-democracy activists with his strategic indifference.

Is the American position that China will suffer no diplomatic repercussions and can enjoy unfettered access to the American market even if it executes a Tiananmen-style crackdown in Hong Kong? Of course not. So why be coy about it? Chinese officials are unnerved more by the prospect that the political contagion in Hong Kong will jump to the mainland than they are by Trump’s tariffs. This administration isn’t preserving its position with the Chinese by pretending that it doesn’t recognize Beijing’s biggest vulnerability.

By stifling his criticisms of human rights-abusing regimes, what Donald Trump may see as the projection of strength is surely viewed by America’s adversaries as weakness. Turkish President Recep Tayyip Erdoğan blames the United States for an attempted coup against his regime, and Trump calls to congratulate him on his suspicious election victory. North Korea murders and purges its nuclear negotiators and Trump gives Kim Jong-un a photo op on North Korean soil. Vladimir Putin counters American geopolitical and economic interests at nearly every turn, and the president can’t bring himself to say a bad word about the autocrat in the Kremlin. What American interest is being advanced by this servility?

If Beijing resolves to put down the protests in Hong Kong with force, the human tragedy will be eclipsed only by the global economic fallout. Donald Trump should mince no words about what that would mean and the pressure that would be put on Western firms eager to sacrifice liberty in exchange for access to the Chinese market.

Jaded American observers might not think much of the national anthem and the stars and stripes, but to those who languish under oppressive illiberal regimes, these are the symbols of invaluable freedom. The very existence of the Hong Kong demonstrations is an assault on the conventional wisdom that Western-style liberalism is exhausted and uncompelling. It’s proof that people cannot be pacified by consumer goods and intimidated by a panoptical surveillance state. It’s a confirmation that the people are the ultimate arbiters of who governs them and how; not the other way around. That is the essence of the American promise, and it’s in both this president’s interest and America’s to say as much. 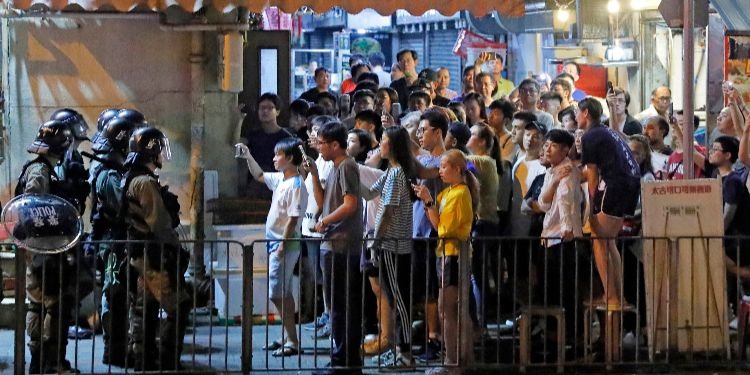 China’s Negligence Is America’s Gain, If Joe Biden Can Make the Most of It