International relations in the first decades of this century were defined less by the dynamic interplay between nation-states and more by how those states coped with the threat posed by stateless actors. On the eve of the third decade of the 21st century, however, relationships between governments are again taking center stage.

In President Donald Trump’s address to the United Nations General Assembly on Tuesday, a clear theme emerged. In his administration’s view, the primary threats to the American-led international order do not come from non-state organizations but foreign capitals.

Donald Trump devoted an extensive portion of his speech to the risks that China poses to the international commercial order. “Not only has China declined to adopt promised reforms,” the president said, “it has embraced an economic model, dependent on massive market barriers, heavy state subsidies, currency manipulation, product dumping, forced technology transfers, and the theft of intellectual property and also trade secrets on a grand scale.” It strikes a discordant note for a president who has endorsed the passions aroused by trade wars to condemn protectionist barriers to free trade and the state subsidization of preferred constituencies, but Trump’s address also sounded a note of continuity. Regardless of who is president, it remains in the American national interest to preserve a global commercial order based upon free-market principles, and those nations that fail to comport with that order represent a threat to U.S. security.

Likewise, Trump noted that China’s repressive approach to pro-democracy protests in Hong Kong represents an assault on another core American interest: the preservation and exportation of political liberalism. Trump has been cautious about too heavily criticizing Beijing amid its efforts to contain the ongoing demonstrations in Hong Kong, but that caution was less evident on Tuesday when he called on Xi Jinping to honor its commitment to preserving Hong Kong’s “democratic way of life.”

Perhaps the most urgent national security threat today is that posed by the Islamic Republic of Iran, and Trump did not hedge his condemnation of Tehran’s belligerent behaviors. He pinned the blame for a recent attack on a Saudi Arabian oil refinery on Iran, condemned Tehran for “fueling tragic wars in both Syria and Yemen,” and warned that the United States would further tighten sanctions against the regime in the event of continued aggression. “No responsible government should subsidize Iran’s bloodlust,” the president warned the world.

Trump devoted special attention to the dangers posed by a menace that was once thought to have been thoroughly eradicated: socialism. In particular, the brand of socialism practiced in Latin America. “Socialism and Communism are not about justice,” Trump said in another nod toward the virtues of Western liberalism. “They are about power for the ruling class.” He noted that the Bolivarian socialism practiced in Venezuela and the unreconstructed Leninism that persists in Cuba represent a distinct threat to international peace and human rights. And while the president’s focus on North Korea sounded a hopeful note about the potential success of denuclearization talks, there can be no doubt that this administration regards the states that still nominally pledge fealty to Marxist dogma as the foremost threats to U.S. interests in the world.

Even when it comes to illegal immigration, an issue with pronounced domestic political salience, the president’s focus was on the extent to which sovereign powers alone have the authority and capacity to mitigate the threat. He discussed the problem of unsponsored migration in terms reserved for national-security threats. He called on foreign nations to “protect your borders,” pledged to continue to do the same, and thanked Mexico for deploying tens of thousands of soldiers to the American border to stem the tide of migrants from elsewhere in Central America.

Lacking in much of Trump’s address, though, was anything resembling a comprehensive doctrine that would address these circumstances in a uniform manner. The closest Trump came to doctrinal thought was his condemnation of “globalists”—damnable adherents to a mystical force which supposedly “exerted a religious pull over past leaders causing them to ignore their own national interests.” But this is more likely a sop to Trump’s domestic political constituents, for whom this ambiguous word is imbued with ominous gravity.

Trump’s emphasis on “patriotism” as a byword for national sovereignty does little to clear up the contradictions in his address. Donald Trump wants the world to redouble its focus on the threat posed to freedom, commerce, and the dominion of nation-states over their own territories. At the same time, however, he sounded isolationist notes at direct odds with his stated intentions. There can be no American-led international order that seeks to counter the ambitions of revisionist nations that is not founded upon a robust, extroverted American-led campaign that leverages its diplomatic, economic, and military advantages toward that end.

Trump may get the solutions wrong, but he has the problems and challenges right. It may fall upon the next American president to execute his vision. If Trump’s speech to the United Nations clarified anything, it is that great power politics is not going away anytime soon. 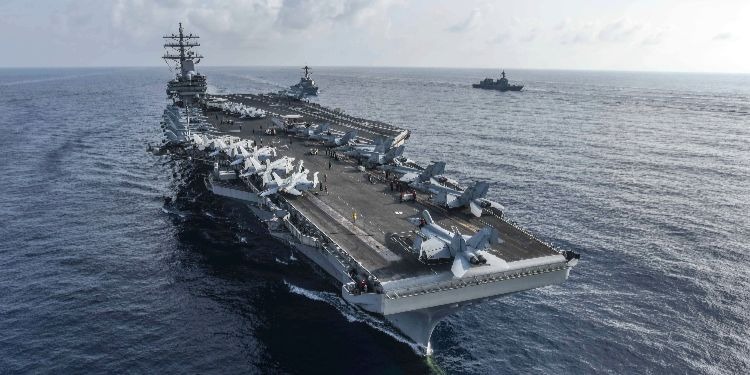