As we near the closing phase of Judge Brett Kavanaugh’s extended confirmation process, Democrats have begun to convince themselves of things that are just not true.

Among the unsubstantiated assertions to which the left has attached itself is the notion that the accusations against Kavanaugh are self-proving because Justice Neil Gorsuch did not face them. Democrats did not strenuously object to Gorsuch’s confirmation, Democrats insist, thereby rendering their opposition to Kavanaugh’s ascension to the nation’s highest court an act of pure conscience. The first contention is a bizarre non-sequitur. The second is an outright fabrication.

The mere fact that Gorsuch did not face allegations of sexual assault whereas Kavanaugh does is not evidence in support of those allegations. To suggest otherwise is an odd exercise in throat-clearing that does not merit a serious response. As to the claim that Neil Gorsuch “sailed through” his confirmation hearings without so much as a serious Democratic objection, that is brazen revisionist history.

Gorsuch was accused of anti-female bias. During his confirmation hearings, two of his former students said that the judge had once encouraged sexist hiring practices. According to a letter sent to Democratic Sen. Mark Udall, Gorsuch argued in class that “many” women misuse the maternity benefits provided by their employers. Gorsuch and his former clerks insisted that this topic did come up in class, but only as a matter of study. The judge, they insisted, was acknowledging a fact of life that occasionally comes before the court system, not making policy recommendations. Any suggestion to the contrary was dishonest and politically motivated.

Gorsuch was accused of having suspect racial views. In 1987, while Judge Gorsuch was earning his bachelor’s degree from Columbia University, he wrote a column for the school’s newspaper in opposition to student-led efforts to force schools to divest from Apartheid South Africa. Though he also attacked the regime, Gorsuch specifically took exception to the ideologically homogenous culture at Columbia that would sacrifice much-needed revenue to support lower-income and non-legacy applicants. A staunch supporter of President Ronald Reagan, Gorsuch’s piece echoed Reagan-era policy toward South Africa, which viewed it as an anti-Soviet bulwark in the region and not just a monstrously racist regime. Those views were described as “worrying” and an example of how he “comes up with legal reasons for making unjust decisions.”

Gorsuch was accused of being a “threat to voting rights” and “a disaster for women.” Gorsuch was made to defend the fraternity to which he pledged, Phi Gamma Delta, which the Daily Beast’s Brandy Zadrozny insisted was “defined by accusations of hard-partying, racism, sexism, and date rape.” When Gorsuch ruled against placing an autistic child in a special private school at public expense, a ruling for which he apologized and said he was bound by precedent to make, Chuck Schumer attacked him for “deciding against everyday Americans.” Democrats like Sens. Mazie Hirono and Dianne Feinstein accused Gorsuch of being evasive for refusing to prejudge cases that had not been brought and arguments that had not been made. And in the end, most Senate Democrats opposed Gorsuch, not because he wasn’t qualified, but because of the questionable legitimacy of the president who nominated him.

“It is unseemly to be moving forward so fast on confirming a Supreme Court justice with a lifetime appointment while this big great grey cloud of an FBI investigation hangs over the presidency,” Schumer said. “The FBI Director testified [Donald Trump’s] campaign is under investigation for collusion [with] Russia,” Sen. Elizabeth Warren agreed. “Lifetime court appointments can wait.” Democrats knew full well that their actions would force Republicans to finish the work Democrats began under Harry Reid in 2013 and end filibuster privileges for all judicial nominees. They also knew that Gorsuch had the support of some Democratic senators as well as every Republican in the chamber and that his confirmation was guaranteed. They knew a filibuster was doomed, but they were prisoners to the illogical demands of their base voters.

“If you truly cannot support the nomination of this uniquely qualified nominee, then at least allow a bipartisan majority of the Senate that supports Gorsuch to take an up or down vote,” McConnell warned his colleagues. “You already deployed the nuclear option in 2013. Don’t trigger it again in 2017.” But they didn’t listen, and instead mounted the first successful partisan filibuster of a Supreme Court nominee in American history. Though Republicans had to break the filibuster to do it, Gorsuch was easily confirmed.

This isn’t exactly “sailing” through the confirmation process, but it was a marginally less of a torturous ordeal than the one to which Judge Kavanaugh has been subjected. For what it’s worth, Democrats are right about one thing: No one offered any corroborating evidence to suggest Neil Gorsuch engaged in sexual assault. But then, that’s also true of Brett Kavanaugh. 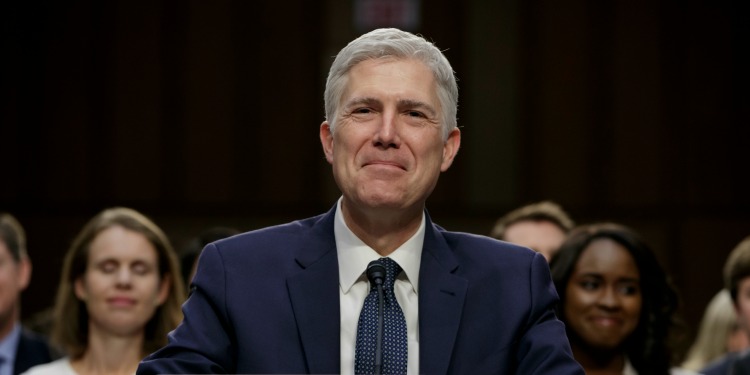