With the passage of the Affordable Care Act, the already distorted health-care marketplace became even more uncoupled from market forces. The public has predictably sought out cues to help them navigate a confusing minefield of convoluted policy and high-stakes politics. One of the most useful navigation tools is the personal story—and here the GOP finds itself outgunned.

The Republican predicament is illustrated in the cultural response to a monologue by late-night host Jimmy Kimmel who, through tears, made an impassioned plea to President Donald Trump and the GOP not to decrease public funding for or access to health insurance. It was a touching moment, and a personal one: Kimmel’s infant son struggles with a congenital cardiac condition and required open-heart surgery.

The response from America’s political actors has been predictably opportunistic. Democrats who believe they can use Kimmel’s anguish to salvage ObamaCare latched onto it and the discussion it sparked. In that craven act, at least Democrats got the tone right. Their Republican counterparts clearly do not know how to respond. The right’s most unapologetically caustic communicators were devoid of compassion for Kimmel’s circumstances. More empathetic conservatives shared the ABC host’s pain but criticized his judgment. Point, Democrats.

Republicans will always find it difficult to counter poignant and affecting storytelling with reasoned logic. That’s not to say logic is entirely ineffective. If stories move the needle of public opinion, and they often do, Republicans need to tell a better story. It’s not as though they lack for material.

Pattie Curran is the founder of a nonprofit research and education organization dedicated to the study of the rare bone-marrow dysfunction with which her two young children were diagnosed. Her ObamaCare nightmare is an important, terrible story. In a 2014 op-ed, Curran described seeing her average annual health-care costs increase from $12,000 to $27,000. She lamented watching her insurance deny coverage for the injectable medication she uses to treat one of her son’s mitochondrial complications. Curran described her horror as the copay for the medication she needed to stabilize her son’s kidneys nearly quadrupled in cost over five years while other lifesaving medications were simply discontinued.

Lance Williams has fared no better. Diagnosed with an aggressive strain of leukemia in 2000, he seemed unlikely to live without a bone marrow transplant, which he was fortunate enough to receive. When he was forced to leave his employer and lose insurance, he was able to secure coverage despite his pre-existing condition because, even before ObamaCare, discriminating against pre-existing conditions was illegal. “[I]f you kept continuous coverage and followed the requirements of the 1996 Health Insurance Portability and Accountability Act (HIPAA), you had the right to buy an individual insurance policy with no exclusions for pre-existing conditions,” wrote health policy expert Hadley Heath Manning. “Sadly, the architects of the ACA misled people about these protections, saying they didn’t exist, and many people still believe that today.” The cost of Williams’s care requirements in a post-ACA environment has exploded. “Last year, my family and I spent over $40,000 in premiums and medical care,” he wrote.

Jeffrey Singer, a general surgeon practicing in Arizona, remarked recently on how the ongoing implosion of the ObamaCare model has left those with pre-existing conditions without recourse in relating the story of his colleague who suffers from breast cancer: “She must seek insurance on the individual market. But in Arizona’s largest county, where she practices, there is only one insurer left in the market. All of the others have pulled out because they found guaranteed issue/community rating economically unsustainable. And this lone insurer has none of the breast-cancer specialists she has been seeing within its network, nor any of the specialized centers.” Singer’s colleague is unfortunate enough to reside in one of the 1,000-plus American counties that are served by only one insurance provider in the ObamaCare-created individual exchanges. That number is sure to balloon as insurance providers draw less and less revenue from individuals and more from government programs.

Prior to ObamaCare, estimates of the number of Americans who genuinely struggled with a pre-existing condition and fell outside HIPAA mandates was estimated to be fewer than one million (contrary to the 133 million touted by ObamaCare architects). Today, somehow, nearly 40 percent of the population of Idaho alone (over 660,000) suffers from a pre-existing condition that would prevent them from being insured, according to the pro-ACA advocacy group Close the Gap. Funny how that happened all of a sudden. Insurance professionals and Republican reformers are in agreement that state-level high-risk pools with proper funding can accommodate the truly uninsurable. “So long as we try to push off the obligation for paying for preexisting conditions onto financial firms — which is what insurance companies are,” wrote National Review’s Kevin Williamson, “we are simply using those companies to launder health-care benefits that are in reality publicly financed, in part or in total.”

All that wonkish claptrap is difficult to relate to when the interlocutor is a new father like Kimmel, scared to death for the life of his newborn son. Human anguish is and will always be more compelling than actuarial tables, graduating deductibles, and access networks. Conservative health-care reformers need to learn how to speak that language and tell better stories. Calling a crying father an “elitist creep” who should “shut” his “fat trap” is an exercise in self-indulgence—a false posture for an age in which macho affect masks intellectual vacuity. No matter how much bile they summon from their limitless cistern of cultural grievances, Republicans will either learn to tell the stories they want told, or they will lose the argument. 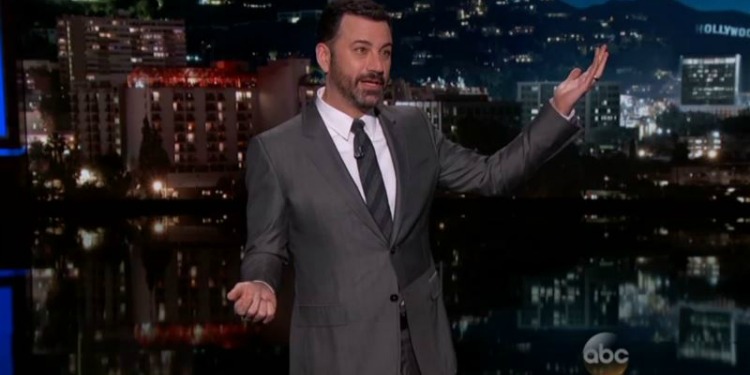