It would be a mistake to presume the kind of violent social disorder the nation witnessed over this weekend is of a single sort. The divisions that separate the virtuous protester defending his communities against excessive police force and the wanton looter are blurred. So, too, are the racial and sociodemographic constituencies engaged in rioting. The footage of the riots suggests that the perpetrators of violence cross the spectrum of America’s racial makeup, as do the victims of this violence. Riots are not a binary thing.

Similarly, there is no monocausal explanation for the eruption of these social tensions. They are the product of many factors that have developed over time. There are those moved to this expression of rage by the perception that they are the target of outrageous persecution by those in positions of power. There are those who engage in this kind of violence out of sheer opportunism and self-interest or a directionless hostility toward power structures of any kind. Violent civil unrest lacks the kind of coherent political program that attracts interest groups operating within defined parameters. But there is a factor that may be fueling this nightmarish violence that has been thus far overlooked: the lockdowns.

For more than two months, nearly every major city in America has been rocked by two parallel crises: the public health disaster brought about by the Coronavirus pandemic and economic insecurity imposed on millions in the effort to arrest the virus’s spread.

This blunt-force approach to a public health crisis has imposed what would otherwise be intolerable conditions upon millions of Americans, many of whom are likely to be overrepresented among those engaging in this unrest. As of late April, those who reported pandemic-related financial hardships include 57 percent of African Americans, 42 percent of Hispanics, people with annual incomes at or below $40,000 (40 percent), and young adults age 18 to 29 (39 percent). We have told these Americans that they cannot work and they cannot have prolonged contact with their older relatives, who might have served as a moderating influence. All we’ve allowed them to do since the weather has warmed is to languish in the heat, consume alcohol, and commiserate with their peers about the injustices the people in power have imposed on them. What did we expect?

There isn’t much of a difference in character to the violent protests that erupted in places like Los Angeles, which intends to pursue lockdown well into the late summer, and Miami, which opened up most commercial and social activities some time ago. So, there are, of course, limits to this theory—again, riots are not binary. But it’s difficult to explain why young people throughout the British city of London have poured into the streets en masse to demonstrate against police brutality in the U.S. save for the fact that it has become a socially acceptable way to skirt social distancing requirements.

Indeed, since the protests around the United States exploded, the rigidly enforced social proscriptions against mass public gatherings largely melted away. Gone are the hand-wringing exhortations from public officials admonishing reckless pool partiers and beachgoers. Those who were once the most committed enforcers of the stigma attached to mass gatherings subordinated that imperative to the virtue of demonstrating against police brutality and systemic racism.

It is incumbent on those responsible voices to find their courage. It would be a profound moral lapse if public officials failed to make the proper distinctions between those engaged in violence and those seeking social change through peaceful means. Likewise, it would be a cognitive failing not to make the connection between the state-mandated indolence to which policymakers appealed at the height of the pandemic and the violence we’re seeing today. If social distancing and economic restrictions are still valuable, and they are, policymakers must balance these concerns. If they don’t, both the violence and the disease will be with us for far longer than we’d like. 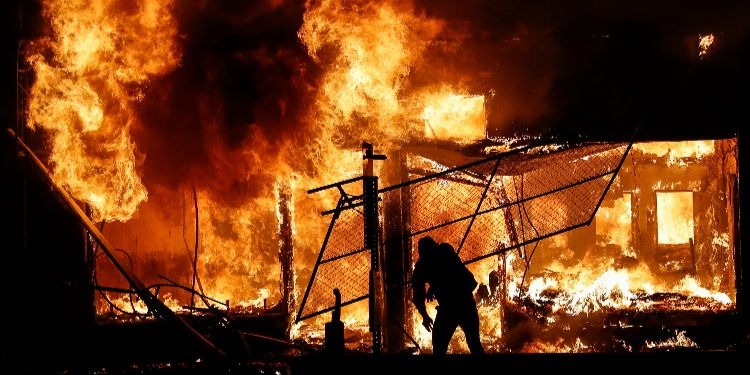