News consumers can be forgiven for assuming that the unrest in America’s cities that erupted after George Floyd’s death had largely abated. Media’s coverage of that lawlessness has certainly ebbed, but, as events in Chicago on Sunday night demonstrated, the organized assaults on American cities did not.

The story in Chicago is now a familiar one. Police officers responded to a Sunday afternoon call about an armed man in the city’s Englewood neighborhood. A scuffle broke out. Police were shot at, and they returned fire. The suspect, who was wounded, was taken into custody.

This story was soon mangled beyond recognition by the game of telephone that is social media: The suspect, who was actually in his 20s, was a child, according to the salacious rumors circulating online. The police did not exercise discretion when discharging their weapons. The crowd that gathered to protest this event was beaten by police without provocation. And, predictably, rioting and looting—the ultimate expression of powerless angst, according to its apologists—followed. The damage this solipsistic narrative has done to the fabric of society can now be measured in blood and shattered glass.

The riots that erupted in Chicago followed a pattern that forecloses on the notion that they were in any way spontaneous. Hundreds of rioters descended on the city center—shuttled into the chaos by what seemed to be a dedicated fleet of vehicles. Cars were used to ram storefronts. A U-Haul truck appeared on the scene to facilitate the marauding. ATMs were ripped out of walls. Pharmacies were raided for prescription drugs. High-end retail storefronts were stripped bare.

This is a particularly brazen example of the lawlessness that American cities have been experiencing to some degree since the last week of May. Over the long, hot summer of 2020, cities across the country have been devastated by organized mob violence.

Portland, Oregon has been the subject of only recent national media coverage—much of which was prompted by the federal government’s belated efforts to protect federal property from crowds bent on its destruction. But Portland had seen violence every night since protests against police violence erupted across the country. And though the cameras retreated from the city when an agreement was reached that led federal agents to withdraw, the property destruction and assaults on law-enforcement officers did not abate.

Seattle, Washington reluctantly resolved to enforce existing law after surrendering a series of blocks to demonstrators, though only after a series of murders and a class-action lawsuit from the city’s forsaken business owners forced the mayor’s hand. But the violence did not end with the dissolution of the “autonomous zone.” Last month, demonstrators targeted a police precinct with explosives, blowing a small hole in the wall. Officers have been targeted with bricks and rocks, businesses looted and vandalized, and fires set across the city.

A crowd broke through a barricade around an Oakland, California courthouse, smashing windows and setting it alight. A similar crowd targeted another courthouse in Los Angeles. Police in Richmond, Virginia deployed dump trucks to cordon off one besieged police precinct, one of which was set ablaze by demonstrators. Protesters in Aurora, Colorado tore down a makeshift fence, threw fireworks at police, and broke into a local courthouse setting it alight.

Apart from the organized violence in the streets, cities across the country are experiencing a surge in homicides and shootings. A Wall Street Journal analysis of the homicide rate in 50 U.S. cities found that 36 municipalities “representing all regions of the country” were experiencing double-digit rate increases. The factors contributing to this bloodshed are myriad. Gang violence is on the rise as the civilians who would otherwise police their neighborhoods retreat from the streets in fear of the ongoing pandemic. Courts have been prevented from operating, and the institutions that would intervene in young lives before they engage in violence are closed. Perhaps most important, the wave of anti-police sentiment that overtook the nation has emboldened the criminally violent.

These conditions are intolerable. The anarchic status quo in American cities cannot persist. Polls have consistently demonstrated that Americans are open to the prospect of sweeping and necessary reforms to the way local police departments conduct themselves, but there will be no such reforms amid this kind of lawlessness. Nothing is more likely to shatter the consensus that emerged in the wake of the Floyd killing than the perception that robbing police of their capacity to intervene in and prevent criminal misconduct gives way to outright pandemonium.

Navel-gazing meditations on a “cop-free world” cooked up in newsrooms dominated by overeducated 20-somethings are a luxury afforded a relatively placid society. Social workers and mental-health professionals aren’t going to break up a riot. There will be no meaningful reforms to existing statutes while the house is on fire. If advocates of reforms to law enforcement’s most controversial practices were serious, they’d be demanding more effective policing. But maybe they just aren’t that serious. 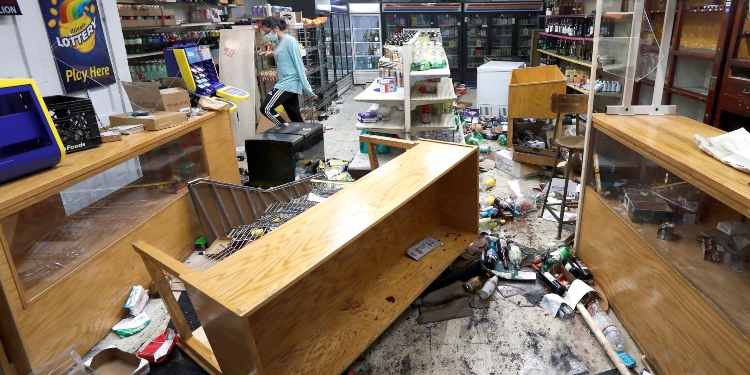