Democrats want to have it both ways. They don’t want to be associated with the violent rabble visible in city streets since late May. Indeed, they should not be. And yet, the Democratic Party also sought to lay claim to a movement dedicated to reforming local police forces with a hatchet. Democrats want to be the party of smarter, more restrained policing, not the associated spike in violent crime; the party of racial rapprochement, not the resentment that follows when government puts its thumb on society’s scales. In the end, the split verdict voters rendered on the last two years suggests the public was perfectly willing to give Democrats exactly want they want.

For months, Democratic officials ensconced in dark blue urban enclaves ignored their naggingly moderate colleagues who warned that ongoing urban violence would have consequences at the ballot box. They dismissed figures like Joe Biden, whose promise to increase funding for local police forces was treated like a sop to the contemptibly hidebound average American voter. Instead, progressive lawmakers insisted that the Democratic Party’s Joe Bidens were blind to the “systemic racism” infecting police. And as progressive-led municipalities sought to restrain their police forces or divest them of resources, their efforts were underwritten by an unruly mob with no fixed allegiances but whose menacing omnipresence lent an air of urgency to the cause.

But because Democrats want to have it both ways, the party’s more conventional figures spent the campaign pretending as though that menace wasn’t there. The violence went unaddressed during the Democratic nominating convention, and it was ignored for most of the general-election campaign—ceding the issue of criminality and violence to the GOP. Meanwhile, Democrat-led municipalities across the country handcuffed their police departments, downsizing them by attrition.

As Manhattan Institute fellow Charles Fain Lehman detailed, 23 police chiefs or life officers in America’s 50 largest cities left their posts in 2020. Even as violent-crime rates spiked, New York City’s police force lost 7 percent of its members, which is in line with the experience of cities like Chicago, Minneapolis, and Atlanta. But the rioting never ended, even as the forces of civilization retreated from the frontlines. And now, Democrats are reckoning with their timidity in the face of these twin threats—the mob and those within their ranks who looked upon it with sympathy.

“I think…using terms like ‘defund the police’ have led to Democratic losses in this last year,” said Virginia Senator Mark Warner. South Carolina Rep. Jim Clyburn likened the slogan and the policies it helped bring into existence to “burn, baby, burn”—a slogan radicals embraced following the 1965 Watts riots. Rep. Cedric Richmond observed simply that “words have consequences,” and “in this election, those words cost us some Democratic members.” In Minneapolis, ground zero for the “defund” movement, Democratic Farm-Labor Party Sen. Jeff Hayden lost a primary race to a self-described Democratic Socialist and wondered aloud if the city council’s aborted efforts to “reimagine” policing without police hurt his party. “If we’re going win legislative races, we’re going to have to figure out how to appeal to some of these folks,” he observed, “because clearly, they switched their ballot from the top of the ticket to the bottom.”

Well, one quick way to neutralize the threat posed by wanton violence and cruelty in the streets would be to police it. That involves not just proactivity on the part of law enforcement and a commitment by prosecutors to impose criminal penalties on the violent, but also to communicate without any qualification or caveat the unacceptability of this behavior. Unfortunately, there are still plenty of opportunities for chastened Democratic officials to make a display out of their contrition.

This weekend, demonstrations in Washington D.C. by Trump supporters who refuse to accept the president’s loss at the polls were met with counter-demonstrators, and the confrontation quickly became violent. “Videos posted to social media showed numerous incidents of shoving and punching as well as a fireworks explosion and a man shoving and knocking down one person before being shoved and punched unconscious himself by others,” the Associated Press reported.

If this antiseptic dispatch isn’t galvanizing enough, the scenes captured by videographers on the ground most certainly are. Trump supporters were beaten bloody in the streets. People eating at restaurants had flaming projectiles fired at them. One civilian was stabbed, four police officers were injured, and 20 arrests were made amid the response to this familiar chaos.

Shorn of the delusion that this civil unrest is some valuable expression of zeal in support of a morally righteous cause, Democrats are freer now to do what they should have done over the summer. They seem more inclined now to see the cult of celebrity around their party’s most revolutionary members as a media contrivance with tangible downsides outside D+25 districts in American cities. The mob has no love for Joe Biden, and the feeling is mutual; Democrats have little to fear from courting the hostility of the contemptible lot. And now that they have won the governing party’s mantle, it is easy enough to make examples of those who have no interest in governance.

For many months, no one could say for sure how formidable were the forces that favored defunding local police. Groups that accused police of perpetrating “acts of terror against D.C.’s black communities” or insisted that police have no place in—of all places—city parks needed to be tolerated or mollified. The elections have exposed them for the political dead weight they always were. A great howl will erupt from cable news and social media should Biden and his fellow Democrats cast these activist groups off into the wilderness. But they should know by now that these are only shadows on the wall. 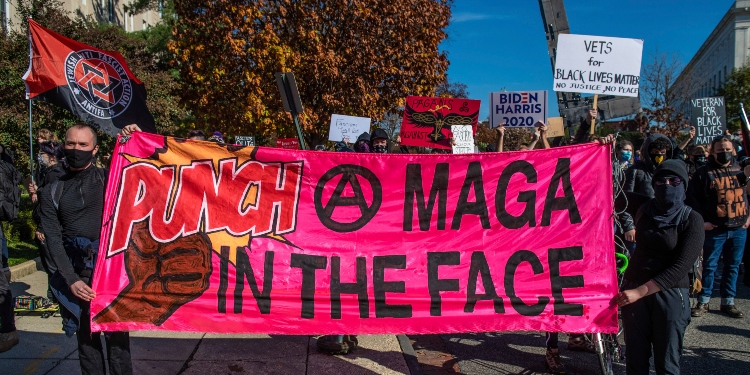