There was nothing normal about controversial Milwaukee Sheriff David Clarke’s supposed nomination to a post in President Donald Trump’s Department of Homeland Security. It was odd from beginning to end. This apparent trial balloon seems to be deflating, and not a moment too soon. The question now becomes: Was any of it ever real?

Of course, that’s a crazy question even to ask. It is not, however, an unreasonable one given the circumstances of Clarke’s “nomination.” It wasn’t the Department of Homeland Security that announced Clarke’s supposed nomination but Clarke himself.  “I’m both honored and humbled to be appointed to this position by [DHS Sec. John Kelly], working for the Trump administration in this position,” Clarke said, breaking the news of his new role to a local Milwaukee radio station. He revealed that his ascension was due in June and that the post required no Senate confirmation. That last bit was important because there is no earthly way the Senate would ever confirm a contentious figure like Clarke to anything.

Clarke has achieved a national profile largely as a result of his capacity to say intentionally provocative things in appearances on right-leaning news outlets, but he was attracting the attention of national reporters before that. The Milwaukee County Jail that Clarke oversaw had long been a source of scandal. “Four people, including a newborn baby, have died at the Milwaukee County Jail since April,” reported the Huffington Post’s Ryan Reilly in December of 2016.  Among the dead was a mentally-ill man who passed away as a result of “profound dehydration.” The infant was delivered by a recently processed inmate “unbeknownst to staff” and was found dead by corrections officers. This in combination with Clarke’s penchant for antagonizing liberal and minority organizations made him an odd candidate for a federal law-enforcement post. Nevertheless, he persisted.

“Everything in Washington, D.C., is a process,” Clarke told the Washington Free Beacon. “The process is slow, the process is arduous. Sometimes it’s one step forward and two steps back. So, I’ve got some loose ends to tie up. Hope to get it done soon.” Uncharacteristically subdued, Clarke promised that his new role at DHS would require him to step back from the daily partisan scuffle on cable news programs. Clarke appeared undeterred by the fact that DHS remained adamant that the Milwaukee County sheriff had not been nominated to anything.

“The position mentioned is a Secretarial appointment. Such senior positions are announced by the Department when made official by the Secretary,” wrote DHS spokeswoman Jenny Burke in a statement to CNN. “No such announcement with regard to the Office of Public Engagement has been made.”

This past weekend, CNN revealed that Sheriff David Clarke “plagiarized sections of his 2013 master’s thesis on U.S. security” at least 47 times. While egregious, this would appear to be the least of Clarke’s problems. For a person accused of inflammatory rhetoric, abuses of authority, and negligence in presiding over the deaths of the inmates in his care, plagiarism doesn’t exactly rank. And yet, this is precisely what Sheriff David Clarke now says may keep him from joining the administration after all.

“This is about weakening, like I said, the support that I give and that I have with President Donald Trump and Secretary Kelly, it’s to weaken their resolve to hang in there with me,” Clarke told one local radio host. He appeared resigned to his defenestration in a subsequent interview. “I’m in a political environment, sometimes political decisions are made, President Donald Trump has to do what’s in the best interest of his administration,” Clarke confessed. “And they’ve cut people loose before, I don’t know why. So time will tell, but I know that he values loyalty.”

Clarke was at one point floated along with a variety of other names as a possible replacement for fired FBI Director James Comey and he is likely telling the truth when he brags about his contacts with DHS Secretary John Kelly. Perhaps Clarke really did believe he was on track for an appointment at the Department. Or perhaps this appointment was merely a figment of his imagination. In any case, David Clarke’s trial balloon is now gently descending to earth. But why was this man ever allowed to harbor delusions about joining the administration in a secretarial capacity? Was Clarke the source of his own balloon, or has the administration’s coyness betrayed its own lack of judgment? The Trump administration sometimes bristles with indignation over its treatment in the press, but the company it keeps leads many to conclude that the scrutiny is well-earned. 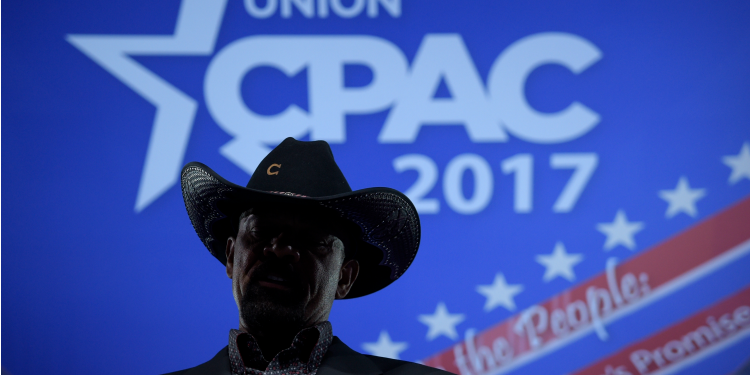