It began like so much of today’s mock revolutionary political activity: as a historical reenactment.

Just over a week into a national convulsion of peaceful protesting and riotous violence following the killing of George Floyd by Minneapolis police, the demonstrations in Seattle took on a more menacing character. These protesters weren’t kidding when they demanded a future without municipal police, and they weren’t interested in waiting for public officials to accede to their demands. So, on the evening of June 8, an organized movement laid siege to a six-block area in the heart of Seattle. They resolved to “occupy” the area, broke windows and confronted police, and, eventually, forced the city to surrender an entire police precinct to the demonstrators. Thus, the Capitol Hill Autonomous Zone was established.

The historical parallels applied to the CHAZ (or, CHOP—Capitol Hill Occupied Protests) varied from day to day. With barricaded streets manned by armed protesters, there were times when the demonstrations were reminiscent of the June Rebellion immortalized in Victor Hugo’s Les Misérables. At other times, the celebratory but clueless architects of this new proto-state evoked famous failures of communal living such as George Rapp’s New Harmony. When the demonstrators composed maps of their newly liberated environs with areas shaded to denote continued “regime” control, the protesters seemed to be ominously reenacting the Syrian Civil War.

All these comparisons fall short of the mark, in part, because this lawless (by definition) and separatist (by their own admission) enclave in the heart of a major American city was never “occupied.” It existed at the pleasure of the authorities who surrendered these blocks to the mob.

Seattle Mayor Jenny Durkan made the arguably defensible decision to cede this territory to “proactively de-escalate interactions” between demonstrators and police, but she soon began to take ownership of the CHAZ as some sort of grand experiment in self-government. “The Capitol Hill Autonomous Zone #CHAZ is not a lawless wasteland of anarchist insurrection,” she insisted, “it is a peaceful expression of our community’s collective grief and their desire to build a better world.” When the president took exception to Durkan’s claim that the occupation was a feature of 2020’s “summer of love,” the mayor snapped back: “Seattle is fine. Don’t be so afraid of democracy.”

Washington Gov. Jay Inslee seemed equally blasé about these extraordinary demonstrations. “Although unpermitted, and we should remember we are still in a pandemic, the area is largely peaceful,” he affirmed, eliding all the violence that yielded this separatist enclave. “Peaceful protests are fundamentally American, and I am hopeful there will be a peaceful resolution.”

City officials bent over backward to accommodate the resistance movement, sending emissaries to negotiate the terms by which trash collection, sanitation, and emergency response services could be maintained. And for a time, the meager coverage that national media devoted to this impromptu “street festival” glowed with thinly veiled approval. The Seattle Times described the flowering of a garden of “purposeful activity” in the “highly diverse and eclectic” CHAZ. “The entire area was now a homeland for racial justice,” the New York Times beamed, “and, depending on the protester one talked to, perhaps something more.” That “something more” was anarchic anti-capitalism—or, as one unnamed protester confessed, a focus on “class warfare” over “the race thing.”

A young radical consumed with antipathy toward American institutions could be forgiven for reading these dispatches and presuming that the only problem with this occupation was its critics. “Conservatives are making fun of CHAZ because they’re scared,” wrote the Daily Dot’s Ana Valens. “They’re very scared of what CHAZ represents, what it will mean for other cities, and how CHAZ is just the start of something much bigger: government without the state.” This approximation of what constitutes profundity in a freshman seminar seemed to capture the prevailing sentiments on the center-left. But conservatives were not dismissive and fearful of these protests because they dread the withering of the state. They feared lawlessness because lawlessness gives way to violent crime. And they were right to be afraid.

The guerrilla journalists who stealthily infiltrated this encampment showed that, from its earliest days, violence was a part of daily life in the new utopia. “We are the police of this community now,” declared one of the patrolmen who was filmed brutally adjudicating a dispute between one of the area’s local strongmen and a graffiti artist. “Police,” it would seem, are an organic feature of every society, even those that languish in the Hobbesian state of nature that prevailed in the CHAZ. Unfortunately for these communitarians, this was the only “police” available. Uniformed Seattle police received a department-wide email on June 12 affirming that the city would only respond to a “mass casualty event” in this disputed zone. The cops were aware of the reported rapes, robberies, and assaults on civilians and news crews in the area, but they could not respond to these calls. The city would not let them.

The tipping point was reached over the weekend when two CHAZ participants were shot and the police who attempted to respond were greeted by a “violent crowd” that prevented them from accessing the scene. “You don’t belong here,” one demonstrator can be heard screaming at first responders. “They’re gone, the victim is gone.” Indeed, one of the shooting victims later died of his wounds. Two others were severely injured. The suspect or suspects are at large.

“It’s time for people to go home,” Durkan announced on Monday. She announced that police would soon be empowered “to restore order and eliminate the violence on Capitol Hill.” With demonstrators now thoroughly dug-in to their fortified surroundings, negotiating the peaceful dismantlement of this anarchic collective might be more easily said than done. But there is no longer any delusion about accommodating this affront to an ordered society. Seattle’s mayor has struck a chastened tone in recent media appearances. But the way that America’s elected officials and elite institutions abdicated their responsibility to Seattle’s law-abiding citizens will not be soon forgotten. 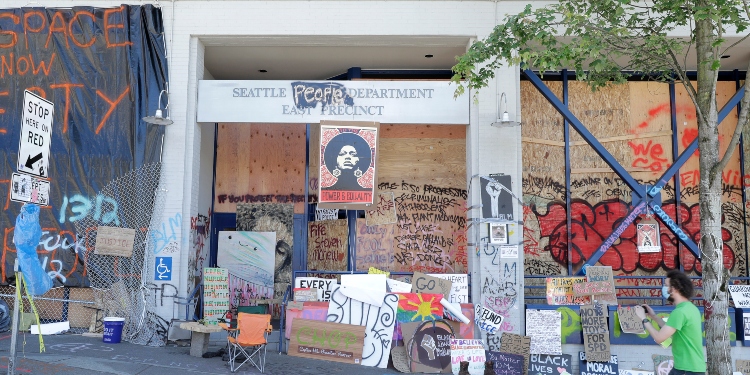