If Vox.com were granted the divine power to craft their perfect politician from scratch, the famously self-assured liberal website could still not have conceived of New York City Mayor Bill de Blasio. A little man somehow occupying a grand office, the mayor occupies himself with every manner of minutia and frivolities – all of which he appears to think are of more importance than managing the affairs of the city he was elected to govern.The progressive’s progressive, de Blasio wages a relentless war on progress. The latest front in the battle to contain the excesses of innovation comes in the form of the mayor’s determination to regulate the competing ride-hailing services Lyft and Uber. In a gift to the city’s Paleolithic livery drivers’ union, de Blasio has proposed compelling these services to cough up $1,000 to the city in order to get approval to upgrade the user interface on their smartphone applications. The proposal is a stab at the heart of these services’ ability to innovate. What is today a process that develops at the speed of thought and ingenuity would, under the mayor’s proposal, become a draconian slog through a bureaucratic morass.

And what problem is the mayor addressing? Only something as comparatively trivial as political constituency maintenance. “The spat puts de Blasio in the middle of a fight between the technology industry, which accounts for about 300,000 jobs and $30 billion in yearly wages, and cab companies that contributed more than $500,000 of the $10.6 million he raised in his campaign,” Bloomberg reported. The aim is not to help the majority of New York City residents make use of this service, but to prevent them from accessing it.

“I’ve said this before and I’ll say it again: The Bill de Blasios of the world are now The Man; the Ubers and Lyfts of the world are the rebels,” National Review’s Charles C. W. Cooke opined. “We now have a clear choice as to how our future will look: Will it resemble the taxi commissions and the labor unions and the government departments that were founded in the 1930s, or will it resemble Silicon Valley?”

But that’s not the only minor irritation presently consuming parochial liberal bloggers that New York City is compelled to address. A report in the website Gothamist revealed that the latest paranoid fad of the feminist left has actually become something of a policing priority. The Police Reform Organizing Project revealed recently that the NYPD recently arrested two men for the crime of “man spreading,” or the scourge of men failing to demurely close their knees, while riding on the subway.

“On a recent visit to the arraignment part in Brooklyn’s criminal court, PROP volunteers observed that police officers had arrested two Latino men on the charge of ‘man spreading’ on the subway, presumably because they were taking up more than one seat and therefore inconveniencing other riders,” the organization’s report read. “Before issuing an [adjournment contemplating dismissal] for both men, the judge expressed her skepticism about the charge because of the time of the arrests: ‘12:11AM, I can’t believe there were many people on the subway’”

The trivialities that serve as prohibitive preoccupations for outrage-stoking Jezebel bloggers are now the subject of quality of life policing. All the while, actual quality of life policing cannot be performed, lest the city and its police force be accused by those same peevish scribes of some or another form of racism, classism, or “hobophobia.”

A source of graver concern for this mayor should be the spiking homicide rate; a statistic on the rise not merely in the outer boroughs alone. “Murders are way up so far this year in Manhattan,” the New York Post reported this week. “Sixteen people were killed around the borough between the first of the year and Sunday. Over the same period last year, the figure was 11. That’s an increase of about 45 percent. Shootings in the borough have also soared.”

In a city in which the mayor and his police force are forever at odds – a conflict that led to a veritable police strike in protest – you might think that de Blasio would be wracked with concern over the city’s future. You would be wrong.

“After 16 months as mayor of New York, Bill de Blasio seems determined to escape the confines of his day job and to prompt a national liberal movement — even as he leaves himself open to criticism that he is not making problems at home a priority,” the New York Times reported last month. The city’s mayor today spends his time crafting liberal manifestos with the likes of Susan Sarandon and Van Jones, giving mock presidential campaign speeches in Iowa, and reveling in the attention lavished upon him by a brazenly left-of-center press.

Great cities deserve great mayors, and they have a way of making petty men appear that much smaller. Today, it should be perfectly apparent to most observers that there is a very small man in Gracie Mansion. 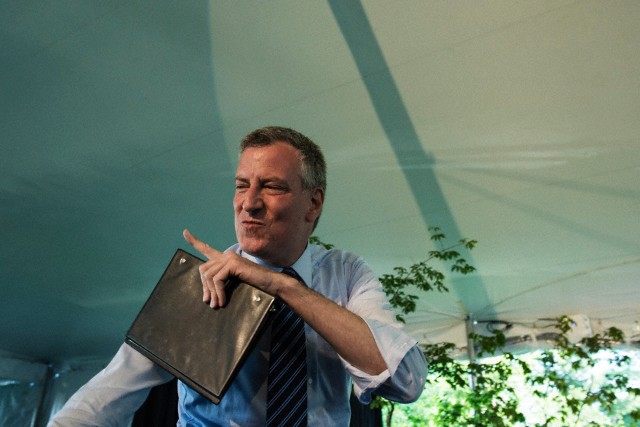