Donald Trump ran for the presidency on the premise that his lack of political experience wasn’t a detriment but an asset. Liberated from thoughtless adherence to the political class’s preferred shibboleths, a populist administration would bring a fresh outlook to government. In fact, most of Trump’s administration was staffed by conventional Republican political professionals. As a result, in areas like law, foreign affairs, and monetary policy, this presidency has been more conventional than revolutionary. But the populists have had their fiefdoms, particularly in the realm of immigration policy. It’s telling, then, that this is the area in which the Trump administration has proven the most incompetent.

The administration’s amateurishness was on display within the first week that the president took office. Donald Trump’s January 2017 executive order prohibiting nationals from a series of predominantly Muslim countries from entering the U.S. for 90 days was a fiasco. It did not survive in the courts, eased Democratic efforts to mobilize a grassroots opposition to the president, and hardened the resolve of Democratic lawmakers to avoid working with Trump on his more centrist economic objectives like infrastructure revitalization. What Trump ill-advisedly called a “Muslim ban” went through several iterations until its third draft finally survived judicial scrutiny—and only then by including at least one non-Muslim majority nation—in June of 2018. It was intended as a sop to the president’s base, but it ended up dominating the immigration agenda for almost 18 months, only to be replaced by another immigration-related debacle.

In April of 2018, American political observers were aghast to learn that the Department of Health and Human Services lost track of nearly 1,500 migrant children who were separated from their parents or were apprehended alone. As had become common in the Trump era, the president’s most imprudent critics unleashed unreserved scorn on the president over a policy that was not of his making. The Obama administration, too, had separated the children of illegal migrants and lost track of them when they were compelled, by court order, to remand them to private custody. But rather than emphasize the intractable nature of their conundrum, the administration’s immigration skeptics took full ownership of family separation as a means of deterring future illegal immigration. Only when Congressional Republicans, including border hawks, forced the president into a corner did the White House abandon this illogical and politically disastrous policy. But even then, the populist wing insisted that family separation was a winner.

The administration’s short-lived “zero tolerance” policy on the border was supposedly the White House’s response to a “crisis” on the border. In the last month, however, the administration has begun providing numbers that attest to the validity of this claim, in part, because they now exist. In March, the number of families streaming into ports of entry began to overwhelm a system designed to process an influx of primarily single, working-age males. Asylum claims are piling up, border patrol stations are flooded, detainment facilities are overburdened, and the courts are backed up with hundreds of thousands of cases.

This is a real humanitarian crisis that requires a legislative solution, more immigration judges to process claims, and a legal framework to extend the time in which families can be detained together in properly funded facilities. Instead of making this demand on Democrats, however, Trump told reporters that “they have to get rid of the whole asylum system.” Not only that, Trump added that “we should get rid of judges” because “we can’t have a court case every time somebody steps their foot on our ground.” Indeed, we can and we must because the Constitution applies not just to American citizens in America but Americans abroad and non-citizens on U.S. soil. Even if the public could be persuaded to believe that the Constitution was the chief obstacle to sensible immigration policy, it’s unclear they’re listening to the president who cried “border crisis.”

And looming on the horizon is the court battle over Trump’s border wall. Republicans spent two years paying lip service to the notion that a sprawling physical barrier along low traffic areas of the border was a valuable application of American resources, but their votes—or non-votes–to the contrary spoke volumes. Without the support of his party and facing opposition from ascendant Democrats, Trump opened a Pandora’s Box and declared a national emergency, redirecting congressionally apportioned sums to compel the military to make manifest on U.S. soil a campaign-trail promise on U.S. soil. A variety of injunctions against the president have already been filed with other lawsuits pending. The first court decisions are at least one month away, and the issue is unlikely to be settled before it reaches the nation’s highest court at some point in the next year—just in time to become a defining reelection-year issue.

Amid all these failures, the administration’s populist immigration hawks are lashing out internally. Border security maximalist Stephen Miller is reportedly behind the restructuring of the Department of Homeland Security that has now culminated in the ouster of DHS Sec. Kirstjen Nielsen and Secret Service Director Randolph “Tex” Alles. The director of United States Citizenship and Immigration Services and the agency’s general counsel may soon follow. The populist wing of the anti-immigration right seems to think that their policies would work if they only had better managers. But to hear border hawks like Anne Coulter tell it, the Trump administration has never been fully committed to the project. In the end, Trumpism will not have failed because real Trumpism had never been tried. 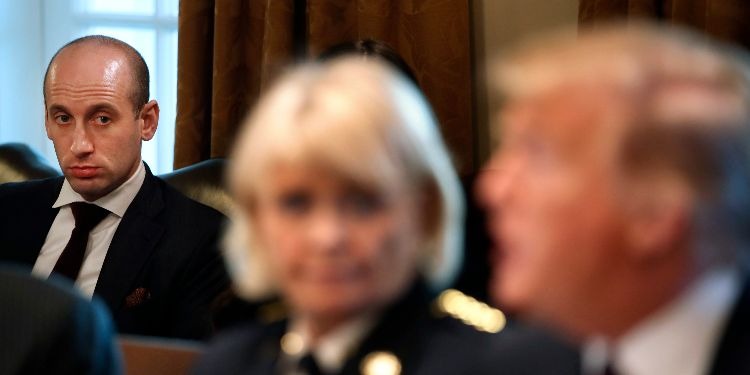